On the Housing Market in Greece

On the Housing Market in Greece

Housing is considered to be the most valuable asset of a household and of fundamental importance for its portfolio. Economics considers housing differently as expenditure on new housing is regarded as investment. There is an extensive literature that focuses on the interaction between the housing market and macroeconomic factors.[1] The recent US subprime crisis, the subsequent collapse of the housing market, the financial crisis and its spill-over effects renewed the focus on the importance of the housing market. The scientific literature focuses on both homeownership and the housing wealth. Homeownership varies across countries and its benefits and costs are under examination. Figure 1 presents homeownership rates for the US, Australia, Mexico, Canada and various EU countries. A degree of differentiation can be observed. Spain, Ireland and Greece are characterized by a relatively higher degree of home ownership. On the other side, housing wealth is defined as the market value of all the assets or capital stock of the residential sector in a country (rented or owned). A number of studies have shown that a positive effect of housing wealth on consumption exists, termed the “housing wealth effect”. Others argue that the latter is overestimated. 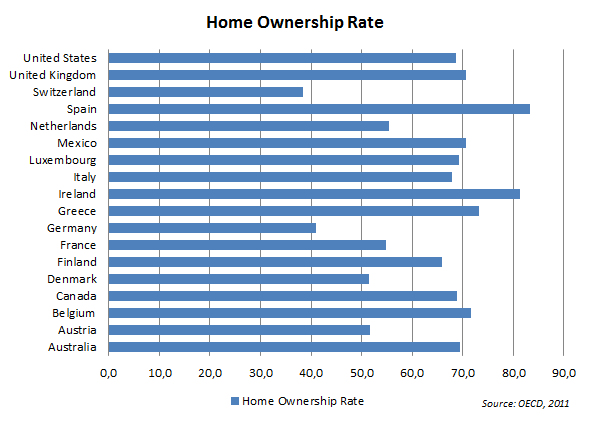 The relevant literature focuses on the macroeconomic determinants of the housing market. It has been argued that a strong short term relationship exists between housing market and GDP. However in the long term this nexus becomes weak.  Taxation policy often emerges as an important factor since it is favourable to homeowners. The latter can lead to social welfare loss and crowding-out for investments in other sectors.  Mortgage loans are of crucial importance. Higher (lower) value of LTV ratio (loans to collaterals) strengthens (loosens) the connection between house prices and bank lending. When the bank requirements in collaterals decrease, the housing market is getting deregulated and the prices are increasing. The linkage between house prices and loans has been showed to be a bi-directional one. The interest rate is often employed as a dependent variable in the empirical models. Many researchers conclude that its effect is relatively small while others argue that it is one of the most crucial macroeconomic factors of the housing market. Moreover, turning to inflation, there is evidence of a money illusion phenomenon in the housing market although the actual effect of inflation on the housing market, depends on the empirical data selection or method. Finally, several studies have shown that a bi-directional relationship exists between the unemployment rate and changes of the housing prices, and a positive correlation between the changes of prices and population changes. 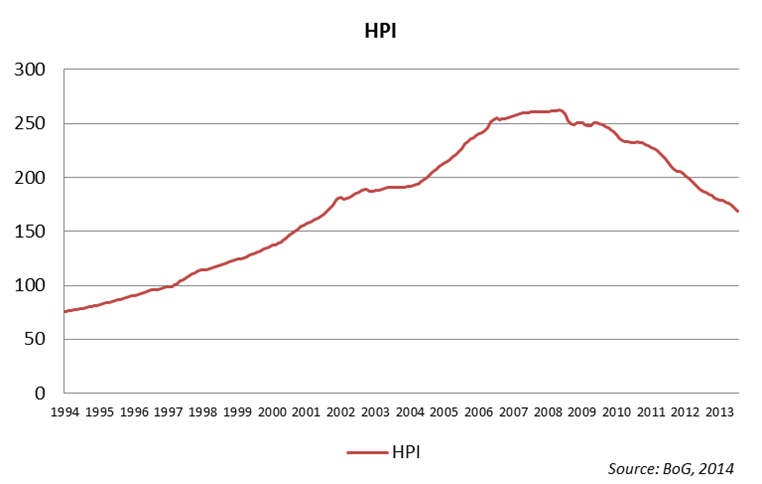 We performed an empirical analysis of the Greek Housing Market based on monthly data for the period 1994:Μ1 to 2012:Μ9. Housing price index (Fig. 2), the interest rate, the CPI, the industrial production index and the mortgages are treated as endogenous. On the other hand, we employ the money supply M1, the unemployment rate and a structural break (impulse dummy variable) as exogenous. An error correction model with a deterministic part was employed, capturing both the short-run and the long-run dynamics of the model. Methodologically we used a two stage estimation procedure discussed in Lütkepohl and Krätzig (2004) which allows us to account for the exogenous variables. The basic conclusion of our analysis can be summarized as follows: first, we find that an equilibrium relationship exists. The following variables affect positively the housing market in the long run. Mortgage loans emerge as the most important variable in the long run, followed by interest rates. Dynamic analysis reveals that the housing price index responds to mortgage and interest rate shocks, while shocks to the other variables of the model do not affect HPI in a significant way. In the long run the causal relationship direction is from the mortgages and interest rates to housing prices. In the short run, mortgages and industrial production  Granger-cause HPI. Overall, mortgage loans is the variable to watch if you want to forecast house prices in Greece. [1]Leung, C. (2004), “Macroeconomics and housing: a review of the literature”, Journal of Housing Economics, 13(4): 249-267.

Bad Behavior has blocked 141 access attempts in the last 7 days.