Greece’s Neo-Nazi Golden Dawn was convicted of being a criminal organisation with a unanimous verdict of the Greek Court of Appeal on 7th October 2020. The trial process started in April 2015, and more than 450 hearings were held in 5.5 years. The “Golden Dawn Case” is considered the most extensive action at law against fascism since the Nuremberg trials following World War II. Nevertheless, the ideological struggle of Golden Dawn continues on different levels, even though the Greek court banned the party from Greek politics. Golden Dawn found a way to survive at every step of its political journey. Although the Greek court secured the demise of Golden Dawn as a political party, it is highly debatable whether its former actors will retain their sphere of influence on Greek politics or not: is Golden Dawn really a spent force?

Golden Dawn was established in 1980, appearing in a political pamphlet and being registered as a political party in 1993. Speaking of 40 years’ organisation and experience, the existence of Golden Dawn cannot be reduced to merely the several violent attacks that have peppered its recent history. In 1998, student Dimitris Kousouris was one of the victims of Golden Dawn’s brutal attacks. The organisation also targeted leftists and anarchists in the 1990s and 2000s. In other words, Golden Dawn was always ideologically on the marginal side of politics in those early days. The inflow of migrants at the beginning of the 2010s added another layer to Golden Dawn’s brutality. Their members started to carry out arson attacks on immigrant shelters and personal attacks on immigrants in Greece in the 2010s.

Their criticisms of the government of Antonis Samaras escalated into the arrogance party members displayed about the incidents they were involved in. The murder of anti-fascist rap singer Pavlos Fyssas became a “wake-up call” for Greek democracy regarding Golden Dawn’s violent attacks. This murder sparked a debate on their legitimacy as a political party in Greece. Therefore, the murder of a public figure who was also a Greek citizen did away with the invisible immunity of Golden Dawn. Also, the leakage of a conversation between Golden Dawn’s Ilias Kasidiaris and Antonis Samaras’ aide Panagiotis Baltakos compelled the government to take action, leading to the party’s trial process.

The “wake-up call” after the murder of Fyssas motivated Greek institutions and society to stand up against Golden Dawn’s increasing threat to Greek democracy. In the aftermath of this increased motivation, the public prosecutor started an investigation into Golden Dawn in 2015, and several members, including party leader Nikolaos Michaloliakos, were arrested.

If one tries to get an overview of the Greek radical right parties’ performance since 1974 (the date of the re-establishment of the Greek democracy), Golden Dawn had been the most persistent and the most successful party among its counterparts in Greece’s contemporary history. 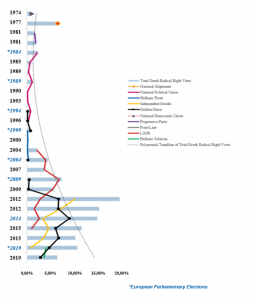 Considering Golden Dawn’s persistence over decades, despite its several election failures in the 1990s and 2000s, this organisation’s actors do not seem to give up easily. To cite a recent example, one of Golden Dawn’s former leading figures, Ilias Kasidiaris, joined a rally via phone from prison in September 2021. Kasidiaris holds onto 2 per cent of the vote in polls with his new party, Greeks for the Fatherland. Also, Golden Dawn-backed groups attacked Communist Party members in Stavroupoli, Thessaloniki, in October 2021.

Although Golden Dawn seems to be a single-issue party, it went through an ideological transformation over time from “National Socialism” to “Diehard Greek Nationalism”. The party’s electoral success can be explained through the adaptation of populist discourses into its extremist ideology. The party was steadfastly committed to its ideology in the 1980s, and remained nothing but a marginal street gang. In the 1990s, Golden Dawn made coalitions with other ultra-nationalist parties, but failed to secure a seat in the Hellenic Parliament. Finally, it underwent an ideological shift in the 2000s and instrumentalized Greek nationalism, injecting populism into its discourse. In this respect, the trial process and the court decisions symbolise the end of the third era for Golden Dawn. Inevitably, their electoral failure to secure seats in the Hellenic Parliament in 2019 accelerated their collapse in this third era.  These discussions beg the following question: Will there be a fourth era for Golden Dawn?

The party was convicted of being a criminal organisation by the Greek Court of Appeal. Adamantia Economou, the prosecutor, proposed 13 years’ imprisonment for Golden Dawn’s leading members, including party leader Nikolaos Michaloliakos. Also, the prosecutor proposed life imprisonment for Giorgos Roupakias, the killer of Fyssas. Moreover, the court rejected the mitigation pleas of the significant defendants, since Golden Dawn had overtly intended to destroy Greek democracy.

The Greek Court of Appeal sent a strong message through Golden Dawn’s conviction, to protect its democracy. In other words, the Greek court played its part in terms of Greece’s struggle against fascism. Nevertheless, that would not be enough to prevent the possible manoeuvring of Golden Dawn in order to maintain its existence. In 2013, Kousouris, one of the victims of Golden Dawn’s brutal attacks, emphasised that defeating Golden Dawn in an ideological context was not enough to solve the problems raised by unemployment, failures in the education system, etc. The struggle against fascism cannot be reduced to merely a legal or ideological level. The general quality of governance is an essential indicator of the rise of extremist ideologies. One should not forget that the aftermath of Greece’s economic and refugee crises caused Golden Dawn’s sudden upsurge in 2012.

On the other hand, convicted former Golden Dawn MP Ioannis Lagos hired former radical right leader Konstantinos Plevris as a lawyer after the court’s decisions. The prominent actors of the Greek radical right had a past in Plevris’ “4th August Party”. Moreover, Thanos Plevris, son of Konstantinos Plevris, currently serves as Minister of Health in the governing party, New Democracy. The recruitment of Konstantinos Plevris in the Golden Dawn trial is no coincidence regarding the Greek radical right actors’ complex political affairs. Also, one should remember that Makis Voridis, the current Minister of Interior in Greece, served as secretary-general of the youth wing of the National Political Union (EPEN), which can be described as the predecessor of Golden Dawn in the 1980s. In Greek politics, the presence of those actors who formerly had affiliations with Golden Dawn indicates that the organisation still preserves solid ideological roots within the Greek state apparatus, even if its leading figures are now serving prison sentences.

Although it is particularly appropriate to brand Golden Dawn as a criminal organisation, this step might not be the last word in this story. As Ernest Gellner suggests, nationalism is a renewable substance and can adapt to changing conditions over time. Golden Dawn’s days may be over, but this organisation’s remaining actors will not yield easily in the long run, considering its 10 per cent potential electorate did not abruptly evaporate overnight. Considering the likelihood that there will be adverse long-term side effects of Covid-19 on economics and politics, the banning of Golden Dawn may not be seen as preventing the rise of the radical right in Greece yet again. The remaining actors of the former and current Greek radical right parties may instrumentalize these adverse side effects in favour of their political goals when they deem it necessary. Moreover, it should not be forgotten that another populist radical right party, “Greek Solution”, has been receiving higher support in recent opinion polls. This rise might diversify the options for new coalitions for the remaining actors of Golden Dawn to start over with a clean slate on its fourth era both ideologically and politically.

Survival of the Weakest?