Dan James is a PhD Candidate in LSE’s Department of Sociology, and the Centre for the Study of Human Rights. Dan’s research interests include transitional justice, Holocaust studies and cultural landscapes of memory. His current research focuses on the representation of the disappeared in Argentina and Chile. This piece is based on that research, and was funded by the ESRC. Dan would like to thank to Felipe Aguilera, Marga Steinwasser, and the team at the Baldosas por la Memoria de Almagro for their help. 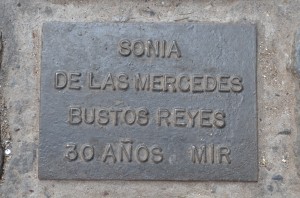 London was purposefully built to represent European culture and high society. The street that bears the name ‘London’ that is, in Santiago de Chile. Instead of sweeping boulevards built in strict geometrical fashion that are the hallmark of Latin American cities, Londres curves gently off before joining up with its namesake París, its jagged black cobblestones a reminder of a place and time far away. Tucked in halfway along the street, Londres 38 was once home to Chile’s Socialist Party. It was taken over by the military in 1973, before being turned into a clandestine detention centre. Around a thousand detainees would pass through the centre, 98 of whom would ‘disappear’, never to be seen or heard from again.

On the streets outside London 38 there are placas – or plaques – dedicated to the disappeared: those who were kidnapped and tortured by General Pinochet’s security forces before being presumably killed. The names of each of those who disappeared are literally written into the pavement, accompanied by their ages and their political affiliations. Their names are surrounded by a scattering of black and white tiles. Blindfolded during their time at the centre, it was only these tiles that many survivors later said they could see during their captivity.

If the placas recall the place that for many of the disappeared would be a staging post on the way to their (almost certain) deaths, other groups are using a similar process in Argentina’s capital, Buenos Aires, to recall and remember the lives of their disappeared. Here, colourful baldosas de la memoria – tiles or mosaics of memory – are being inserted into pavements across the city to remember the places where those who were taken were born, lived, worked and studied.

It was Clifford Geertz who famously remarked that ‘culture is the stories that we tell ourselves about ourselves.’ This is the city as text, one that is written on, re-written on and which invites itself up to be read. But how should we read this writing on the city? How can we situate this process of etching the names of the disappeared onto the urban fabric? Here, I want to make four observations.

Firstly, denied the proof of the bodily remains or reliable testimony of their deaths, the representation of the disappeared in stone speaks to the human need to materialise in some way the loss of a loved one. Relatives’ anguish at the disappearance of a family member was compounded by the lack of a grave at which to lay a flower or express their grief. Indeed some who go to the Memory Park in Buenos Aires today say they feel comforted by simply being able to touch the monument that carries their child’s name. Around the world, societies have elaborated an array of practices to remember the disappeared in which a cultural artefact or icon is often used to stand in for the missing remains of the disappeared person. In this reading, the tiles etched with the names of the disappeared are the embodiment of that which ceased to be: their material bodies.

Secondly, we may be witnessing what Silke Arnold-de Simini has referred to as the globalisation of the memory of the Holocaust. The placas closely resemble Gunter Demnig’s stolpersteine, a memorial first created to remember the murdered Jews of Cologne but which has since been translated to over a thousand cities across sixteen European countries. In a globalised world, what is written in one place can come to obtain a significance in another far removed from it, so that it is possible to map the steady influence of the memory of the Holocaust on commemorative practices elsewhere. Buenos Aires’ Memory Park has eerie echoes of the Jewish Museum in Berlin, with its ruptured form and ‘stalae’. The shoes left behind in Auschwitz have been carved in stone on the banks of the river in Budapest. And in an extraordinary twist of statecraft, Perú will soon have its own Place of Memory, funded in part not only by its own government, but Germany’s as well. This museum will commemorate the cataclysmic revulsion of terror that enveloped the country in the 1980s and 90s, in which tens of thousands of people disappeared.

Thirdly, the writing of the disappeared onto the city can be read as an act of confrontation. In very different ways, society in Argentina and Chile closed ranks during their respective dictatorships.  Many people chose to stay silent, tacitly support or become complicit with the repression. And whilst in Chile this led human rights groups to store up evidence of human rights abuses to be used against the military when the right day came, in Argentina the Madres de Plaza de Mayo took their fight out on to the street during the dictatorship. The baldosas and placas are a wink in their direction, a mark in their tradition. ‘If you are not willing to come to the museum’, the stones appear to be saying to those who walk on by, ‘then the museum will come to you!’

Finally, the tiles are evidence of an increasingly creative burst in practices of memory. As we in Britain commemorate those who courageously fought and died for this country a century ago, how many of us will be drawn to a cenotaph or war memorial to pay our respects? Early attempts to memorialise the dead in stone were strictly modernist representations, built at the side of a local church, a school or village hall. Since then, and somewhat paradoxically, memorials have been asked to do more, with less. They have become national symbols, tasked with standing in for the nation entire, and have mobilised an increasingly symbolic form to do so. Washington’s Vietnam Veterans’ Memorial and Berlin’s memorial to the Murdered Jews of Europe are good examples; the British Government has now tasked a Commission with the job of coming up with something similar here. This may already be an anachronism. More and more, museums and places of memory are turning to creative, artistic and performative practices in order to work through a difficult past. I like to think of these as the counter-counter monument. Writing in stone is being complemented – if not superseded – by the writing of trauma in the bodies of those who use dance, art and theatre to invoke the recent past.

In and on the city, the past in Chile and Argentina is being remembered and put on display. But if the city is a text, then it is one that is not just being written upon and read but acted out, and human rights in these countries will arguably be all the more stronger for that.

Micro-movement and the memory of slavery

How can we prevent genocide?