Janine Ewen is currently working as a researcher and news writer in Public Health and Human Rights. Her expertise falls into humanitarian work in East Africa treating and teaching in overseas sustainable First Aid. Janine conducted primary research in Rio de Janeiro on the expected impacts that sex workers would face as a result of the World Cup 2014, with an examination of Brazil’s response to HIV/AIDS.  She also worked in Health Promotion with street children in the Favelas surrounding the Maracanã stadium (one of the sites for the FIFA World Cup 2014 and main site for the Olympics 2016). Janine returned from Rio three weeks ago where she presented at the 2nd International Mega Events and Cities Conference. Janine was acknowledged by the Red Cross last year at the Humanitarian Citizens Award ceremony and next month is due to attend the International Transparency School of Integrity in Lithuania to discuss global corruption and organised crime.

Given the nature of the incident described in this report, all witness statements and comments will remain anonymous.

On 23rd May 2014, police from the 76th Police Precinct in Niterói, not far from Rio de Janeiro, invaded without judicial authorisation a building named Avenida Amaral Peixoto, which was occupied by 300 sex workers and other residents. The illegal police crackdown operation named ‘Project reurbanizacao’ involved the removal of around 100 sex workers, who were taken for investigation at police stations.  The operation is believed to be a part of mass hygienisation (social cleansing) in the city centre of Niterói, aimed at enforcing a new image of Brazil in time for the FIFA World Cup 2014 which begins on 12th June.

Sex workers, those living in the apartment, and surrounding residents of the area face displacement and closed businesses. Police actions have left a huge majority in the area without work or homes. Small businesses, including shops and hairdressers, which depended on servicing the local sex work community for their survival, were demolished and sealed closed.

One sex worker on site described a woman with her daughter around the age of six years old scared of not knowing what to do, fearing that the police will return to them for more punishment for selling perfumes, hair accessories and other goods to sex workers.

“I saw the misery that the armed wing of the State caused”. (Sex worker) 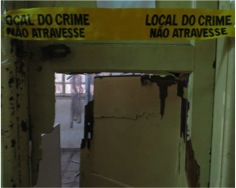 There have been online discussions promoted through the Observatório da Prostituição, an extensive project of the laboratory of Ethnography at the Federal University of Rio de Janeiro to raise awareness of the mass police raid, with reports of rape (women were forced to perform oral sex on the police), theft, and physical violence.  Sex workers claimed that the police planted evidence of false crimes in their belongings to purposely make matters worse for them in the eyes of the law.

“They broke the doors of the apartment, leaving it totally exposed to all sorts”.

“A policeman who assaulted one of the women from the apartment screamed: “I hit! She was cursing the f-word “- as if that was a legitimate reason for assaulting a woman”.

The police forced the removal of people, with little consideration for those who may have problems physically leaving the complex without the use of the apartment lift.

“The elderly are trapped in the apartment because they cannot descend and ascend stairs and the police have closed the lift”.

Transvestites and transgendered people faced foul slander and discrimination from the mass invasion by police officers.

“We saw a lack of respect by the police towards transvestites – seeing how the police mock them by saying out loud Dyke … or the FAG.” (Witness)

After returning to the apartment complex from their release, sex workers went back to their rooms to find little left or nothing at all. Windows were smashed, door locks destroyed. Personal items and money were taken, leading to the presumption that illegally escorting of sex workers to the police station was a venomous plan to take everything and to shame sex workers and allies, reminding everyone of the power of the police. Having the law on their side paves the way for countless acts of corrupt police action against the sex working community. Project ‘Reurbanizacao’ makes a strong and important case (added to the long list of many) for explicit revisions of policies in Brazil regarding the health and safety of sex workers.

Although it can be argued that these circumstances already existed without the phenomena of the World Cup, there is a wealth of research to suggest that mega sporting events intensify such problems (South African World Cup 2010; Olympics in Vancover Canada 2010; London Olympics 2012; Commonwealth Games 2014). The securitization of policing is nominally to prevent organised crime but impacts severely on people’s lives.  The evidence of harm this causes is undeniable, yet it is always dismissed as necessary to achieving the “legacy” that such sporting events claim to achieve, most notably equality, improved social environments and to engage every citizen of the hosting country.

One of the sex workers who has been present at the scene since Friday expressed her emotional distress at the situation at hand: “I wanted to cry several times with them. I am very tired physically, mentally, but ready if they need me, because we want the houses of these people back. We will not be quiet, we’re going to occupy the building and express until society understands that these people established business to survive and that sex work is not illegal”. (Sex worker and activist).

After I conducted fieldwork primary research in Rio de Janeiro over the summer of 2013 with sex workers and civil society organisations, it was predicted by sex workers that the World Cup 2014 could cause problems for them, most notably violence from the police. The laws on sex work in Brazil are conflicting and can cause confusion; sex work is not illegal, but the law criminalizes any third party who profits from the sex industry, whether they are a brothel owner, or private bodyguard. Two sex workers sharing an apartment is also against the law. This causes a huge problem as public authorities like the police have mechanisms of control over sex workers and take advantage of this. It is also common for Brazil’s society to believe that sex work is illegal, or branded as an immoral profession in a Catholic rich state, giving more opportunity for police officers to abuse their position within the law. 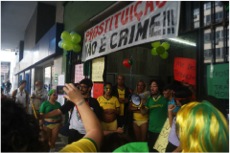 Recently sex workers have united and protested on the streets of Niterói on the ordeal. This gives a clear statement to all; sex workers will use activism and build resilience to fight against the crimes against them. A public forum took place yesterday to discuss the violence experienced by the sex workers in Niterói and we await further updates on this. 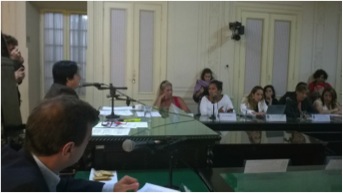