This article was previously published at: http://anankemag.com/2016/08/07/cultures-of-care-morality-and-gender/ 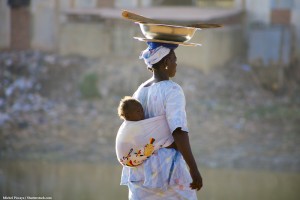 Stemming from a patriarchal mindset, care-giving responsibilities to the young and old alike are presumed to be mainly a woman’s job. All across the world, women spend disproportionately more time doing care work with little to no remuneration.

Additionally, care work either goes unacknowledged or is relegated to the lowest familial ranks and/or positions in the labour market, confining women to gendered and societally segregated roles of child-rearing and domestic work. Thus arises the notion of the “Second Shift”[1] – the idea of not only being grievously under-paid and under-valued, but also grossly exploited.

Eastern societies, especially those in the Indian subcontinent, have emerged from an agrarian-feudalistic civilization. These regions have historically based their values on the commodification of means of production. With feudalism sanctioning men and those in power to brazenly extract produce and surplus from direct producers. Such societies subordinate those economically challenged and/or physically weak, from the serfs to women and children – producing unequal economic relations and social reproduction, and paving the way to oppressively gendered hierarchies.

According to Nancy Folbre in her book, Greed, Lust and Gender: A History of Economic Ideas,[2] “Patriarchal feudalism could be described as a set of implicit exchanges in which the subordinated parties (whether serfs, women, or children) received protection and security in return for working long hours in the service of their superiors. But these exchanges were enforced by threat of violence as well as weight of political and military power… Men benefited from a division of labor that assigned women the least remunerative forms of work; feudal lords, for the most part, inherited their land and privilege. Men, having chosen a wife, were legally bound for life.”

Historically speaking, this patriarchal hegemony can also be seen in the Middle East, with fathers, brothers, or husbands possessing supreme authority over women.

Cultural Diversity in the Subcontinent

History is replete with stories of women maintaining a high status in ancient Indian society, though that position gradually eroded during the medieval and modern times. By and by, women’s status in the agrarian subcontinent hit rock bottom as feudalistic exploitation grew.

As a consequence, it magnified the commodification of women as a means of production. Not only did this emerging “norm” completely ignore care and domestic work as real work, it even went on to overlook women’s untiring efforts outside the home and on the lands.

Society was eventually shaped into an ironically patrilineal one. Women had the double burden of work within the confines of their homes as well as outside chores from bringing in water to tending the crops. It was indeed a dire situation as they did not even have the right to bodily and financial autonomy, let alone be recognized as pivotal players in economic and social development.

Post partition, the subcontinent has experienced a systemic decline in the status of women and the consequent rise of gender inequalities, be it in bodily and financial autonomy, education, or exclusion from the labour market. And the status quo largely remains the same.

Although different shades of traditions and cultures can be found across Pakistan, Nepal, Bangladesh, and India, one common aspect is the uniformed patriarchal mindset. These societies thrive on power relations, which tend to exploit all activities including care work performed by women, even to the extent of discounting them.

It is clear that a gendered approach to care finds its roots in economic power relations, bolstered by the imposition of biased belief systems, rigid mindsets, and traditions as interpreted by stakeholders – in other words, those with power.

The impact of such an approach to social reproduction is cataclysmic as far as economic development is concerned. Disempowering women through discounting their labour – be it care or domestic work – has dire ramifications on development, the overall quality of life, and therefore sustainability.

Talking about gender roles and Pakistan’s patriarchal society, Safeer Ullah Khan, Executive Director of Bedari[3] explains in an interview: “Culture plays a very important role in setting gender norms, and unfortunately, culture is heavily tilted against women. The division of labor is very clear – man is supposed to earn, and woman has to take care of the house. As the financial earning is responsibility of the man, hence the monetary control also remains with him. The woman takes up the role of the caregiver, which is an inherently unpaid job, so she remains dependent on man (on father in her early life, on husband in her middle life, and on son in her later life). The gender roles are so clearly defined that it becomes nearly impossible for men to come to the support of their women even if they want to. The social pressure is so great to adhere to your gender role that you just can’t breach it.”

Adding further, Khan states: “Culture puts the responsibility of care giving exclusively on women’s shoulders, making life difficult for them. I don’t know about other societies, but in Pakistan men are actively discouraged from sharing the care related responsibilities by the society, which means it would take really long to change the mindset, and bring any improvement in women’s lives. And because they are mostly caring for their own children, husband, or in laws, women are not supposed to ask for money as it would be highly offensive to make such a demand. Any woman making such a demand would be severely censured by the entire community.”

Care work impacts all of us, yet it is hardly recognized or endorsed as so. To achieve gender equality in every socioeconomic sphere of society, recognizing and elevating the status of care work is a must. Rights-based policies and laws on the premise of shared responsibilities by all stakeholders (individuals, public and private sectors) are fundamental stepping-stones to achieve this end.

Additionally, gender-sensitive education and awareness that promotes co-sharing of responsibilities is important as it has the power to fracture stereotypes within the family and community.

Until our hegemonically patriarchal mindset is completely dismantled, all will remain but a bombastic rhetoric.

*Sabin Muzaffar (Twitter @Critoe) is the Executive Editor of Ananke (www.anankemag.com) – eZine empowering women. She has been in the publishing business for two decades and has worked for prestigious media globally. Sabin believes in creating social impact and empowerment through education.