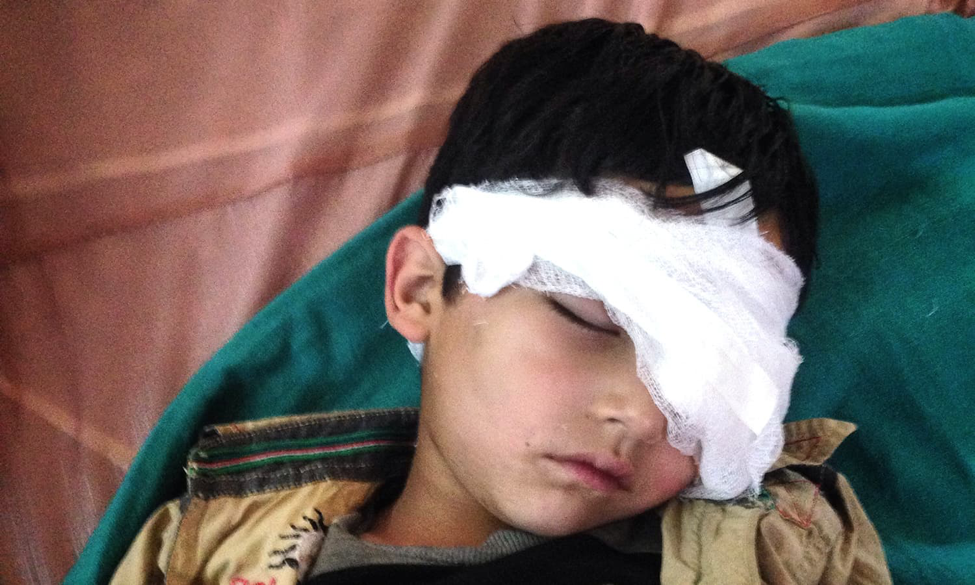 According to the CIA’s World Factbook, Jammu & Kashmir, commonly referred to as Kashmir, is occupied by India, China and Pakistan. It remains the site of world’s largest and most militarized territorial dispute. Kashmir, primarily seen as a point of fierce contestation amongst the nuclear armed India and Pakistan, encompasses complex internal political dimensions with a massive constituency vying for complete sovereignty. In the Indian-occupied part, the movement for national self-determination has taken multiple forms: the Plebiscite Movement of the 1950s and 60s, popular armed uprisings of the late 1980s, and massive street protests, also dubbed as intifadas, of 2008, 2010, and 2016. The thread that binds every phase of Kashmiri uprisings however is the scorched-earth response of the Indian state. With 700,000 Indian armed forces—one for every seventeen Kashmiris—deployed throughout the past 69 years of Indian rule, north of seventy thousand civilians have been killed, around ten thousand subject to enforced disappearance and thousands tortured. According to Human Rights Watch, Indian forces have consistently used rape as a weapon of war. Moreover, upwards of six thousand mass and unmarked graves have been discovered by various human rights groups.

The latest phase of popular protests, was triggered this May when the rebel-leader Burhan Wani was killed during an armed confrontation with India’s special ops forces in a village in South Kashmir. Many activists maintain that, even by the standards of India’s domestic law, the killing was an extrajudicial-execution. The execution of Mr. Wani was mourned and protested by huge crowds, numbering in the tens of thousands. But the reaction of the Indian state was no different this time either. If anything, the intensity of the Indian crackdown acquired a more asymmetrical form targeting children, women, men and even livestock. Close to 100 civilian protestors have been killed, 17,000 injured,  crops burnt, houses ransacked, hospitals and ambulances attacked, and religious establishments besieged.

The ongoing repression of Kashmiri dissent has been distinguished by what a prominent Kashmiri novelist has called, the “world’s first instance of mass-blinding.” More than 1100 people have been hit in the eyes with birdshot or pellets from pump-action guns, with many of them facing some degree of blindness. Fourteen percent of the victims are below the age of 15.

First commissioned in 2010 as “non-lethal” weapons for crowd control, the Indian forces have shot upwards of 3000 canisters containing 1.2 million lead-coated pellets in the seven months of mass-uprising in Kashmir. Pellet guns, according to weapons experts, are essentially 12-guage shotguns whose design was copied by an Indian ordnance factory from the American Mossberg 500 series. The Mossberg 500 was employed by the US Marines in the Gulf War, Iraq invasion and the war in Afghanistan.

The physical damage caused by the use of pellet guns is unprecedented according to Kashmiri doctors. Calling them “mini-bullets,” ophthalmologists at one of the largest hospitals in Kashmir have said, “this epidemic of dead or dying eyes is the largest in the world caused by un-natural causes. Nowhere in history will one find anything comparable.” Despite condemnation by international human rights agencies like Amnesty International, the use of pellet guns continues unabated in Kashmir.

Political imprisonment and arbitrary detention have been regular features of Indian rule in Kashmir. Over 7000 arrests were made by Indian forces since May, including 350 people, some being minors, who have been arrested under the draconian Public Safety Act (PSA). The PSA has been repeatedly deemed as a “Lawless Law” by Amnesty. Many of them remain incarcerated far away from their homes, effectively depriving them of family visits and legal counsel. A very stark example of this phenomenon was the recent detention of a prominent Kashmiri human-rights activist Khurram Parvez. Mr. Parvez was arrested in September, soon after the Indian authorities barred him from travelling to Geneva to attend a UNHR Council Session. Charging him on spurious grounds, the state-authorities arrested Parvez for violating the PSA. Thanks to a sustained online campaign and global condemnations from influential public intellectuals, like Noam Chomsky, Arundhati Roy, and UN experts, Parvez was recently released after 76 days. Many popular political leaders have also been detained or face house arrests.

Free speech is another casualty in Indian-held Kashmir. Soon after the killing of Mr. Wani, a blanket ban on internet and mobile-phone services was imposed by authorities across the region, ordering ISPs and telecommunication companies to shut down Internet and mobile phone access. Furthermore, all local newspapers were ordered to stop publishing for three days. State authorities didn’t stop there. A local English newspaper, the Kashmir Reader, was banned from publishing. Amnesty Internationalcalled the banning of Kashmir Reader “a setback to free speech.” Internet was partially restored after 133 days.

The education system in Kashmir is tightly regulated by state entities. The Jammu Kashmir State Board of School Education (JKBOSE) handles both public and private schools, while state-controlled Kashmir and Islamic Universities largely oversee higher education. Amidst the longest military curfew and widespread protests, schools, colleges and universities remained closed for at least four months, only recently reopening.

In a shocking announcement, to project a cosmetic sense of normalcy, state-authorities in October announced the schedules for conducting examinations of 10th and 12th classes—Kashmir’s equivalent of GCSE and A-Level, respectively. Students instantly began protesting, demanding the deferment of examinations until March of next year, primarily citing the inadequate class-work and insensitivity of authorities towards the injured students. Paying no heed to student protests or to civil society groups, who lamented that the examinations could lead to suicidal-tendencies amongst students, the state authorities remained adamant. This eventually led to a situation where unknown arsonists burnt down around 30 schools across Kashmir. While the enforced exams were being conducted, a minister in the Indian government called them a “surgical strike against terror,” turning the examinations into tool for propaganda. Insensitive state-actions like these can, in fact, and may already have turned Kashmir’s school education system into a politically over-charged battlefield. If history is any indication, future mass-uprisings are inevitable, and the education system of Kashmir is going to suffer even more intensely.

Despite the past 69 years of deadly conflict, repression and popular resistance in Kashmir, India shies away from investing any meaningful political effort to negotiate a resolution with Kashmiris and Pakistan. Rather, India continues to brush it away as Pakistani-sponsored terrorism and labeling Kashmir as its integral part. Pakistan, although formally recognizing the Kashmiri people’s right to self-determination in accordance with the UN resolutions, has been accused by Human Rights Watch of torture, political repression and censorship in the Pakistani-held part of Kashmir.

Amidst all of this, Kashmiris continue to suffer and resist, away from the media spotlight and in a constant shadow of nuclear annihilation that, besides erasing Kashmir from the face of earth, will initiate a nuclear winter with a potential of starving at least a billion people, according to Ira Helfand of the Royal Society of Medicine.

* Umar Lateef Misgar is a graduate student of International Relations at the Islamic University of Kashmir and co-editor of withkashmir.com. He has written for openDemocracy, Counterpunch and London School of Economics Human Rights Center. Twitter @Kaashur

Questions of legal identity in the post-2015 development agenda