Analyzing citation rates for individual academics can be controversial and must be considered within a fair amount of context. Some academics may avoid dipping their toes into the water at all out of fear that their work is not being cited as much as they would like, whereas others are more keen to better understand their citation record. What they might not know is that citation patterns depend on a number of exogenous factors- such as the country they work in, their age, their specialized academic role, and distinctive features of their discipline or sub-discipline- making comparisons between fields problematic.

Looking across disciplines in Figure 1, for example, we see that there is a great variation in citation rates when we divide the total number of citations to journal articles in a given year by the number of journal articles produced in the same year (as recorded in the ISI Web of Knowledge citations database).

Figure 1: Differences in the average aggregate citation rates between major groups of disciplines, (total citations divided by number of publications) 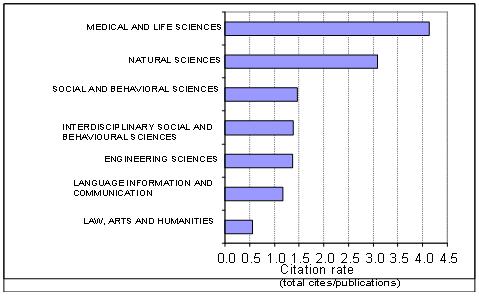 There are several reasons why medical and physical sciences may receive more citations than the social sciences; one being a strong and rigorous culture of systematic review requiring all relevant publications to be cited initially (more so in medicine), and another being the development of a ‘normal science’ culture notably lacking in the social sciences.

Even within the social sciences and law we see quite a variation in self-citation rates between disciplines. Figure 2 shows how they vary from just over three citations per journal article in psychology (which we count as being half in the STEM disciplines), down to just 1.5 cites per article in economics and business, and just over 1 citation per article in political science.

Figure 2: Citation Rates across the Social Sciences plus Law 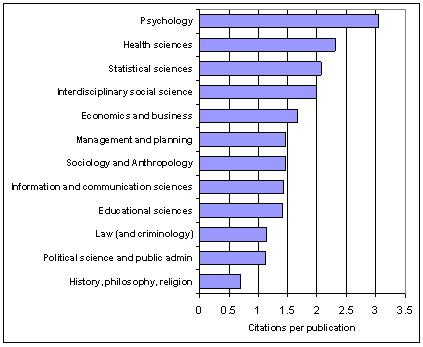 The disciplines at the top here are partially physical science disciplines, which have higher citation rates. The lower performance of disciplines like political science and law could be explained by poor overall citation practices and a lack of ‘systematic review’ culture in these disciplines. Or it may reflect the fact that the Web of Science database used for these comparisons excludes books and many less well-known journals in these fields.

Whatever the reason, the take-home point is that it is tricky to make sensible comparisons about citation rates across disciplines. Academics who are asked to sit in judgement on colleagues – whether by interviewing applicants for new staff roles, participating in appraisal or promotion systems, mentoring, or performing departmental administration tasks – should keep discipline variations and other factors (to be elaborated in this blog) in mind.