Researchers who blog about a paper enjoy a large increase in the number of abstract views and downloads over the month that they blog, but does this mean that the reputation of the academic also improves? In the second of a three-part series, David McKenzie and Berk Özler try to discover if blogging affects reputations and government policy.

Yesterday, we examined the impact of blogs on downloads and citations. Today, in Part II (of a three-part series), we present our findings, and detail our efforts in doing so, to see whether blogging improves the blogger’s reputation as part of our paper in progress. We are also asking you to tell us whether you think blogs influence economic policy and request that you provide us with anecdotes (or better evidence if you have it).

Davis et al. (2011) conducted a survey of academic economists in the US, with 299 (15%) responding. The survey asked these academics to list up to three living economists over the age of 60 and up to three under the age of 60 whom they “regard with great respect, admiration, or reverence”. Gary Becker, Ken Arrow and Robert Solow were the top choices among the over 60s, and Paul Krugman, Gregory Mankiw and Daron Acemoglu the top choices among the under 60s. The under 60s list of 23 names contains a number of regular bloggers – in addition to Krugman and Mankiw are Steven Levitt, William Easterly, Nancy Folbre, Dani Rodrik, and Tyler Cowen.

We merge this list with a list of the top 500 economists according to the RePEc rankings (based on paper downloads, citations) and also code each of the RePEc top 500 according to whether they blog or not. This data is then used to estimate a probit model to see whether, conditional on RePEc ranking, individuals who blog are more likely to appear on the above list of favorite or admired economists. Table 2 shows the results, for the pooled sample in column 1, and separately for under 60 and over 60 economists in columns 2 and 3 respectively. 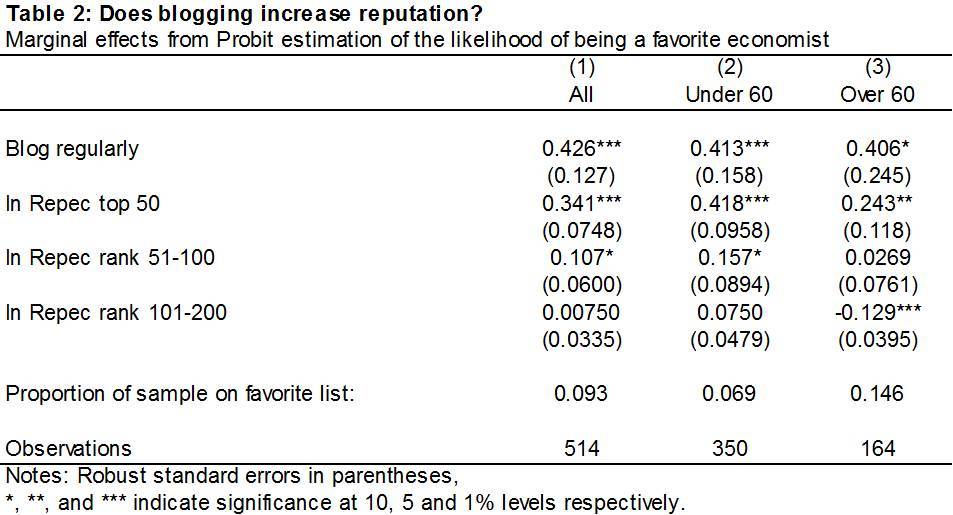 In all three columns we see that, conditional on their RePEc rank, regular blogging is strongly and significantly associated with being more likely to be viewed as a favorite economist. Blogging has the same size impact as being in the top 50 of RePEc rankings for the under 60 economists, and a larger impact for the over 60 economists.

This evidence is thus consistent with the view that blogging helps build prestige and recognition in the profession, with bloggers being more likely to be admired or respected than other academics of similar (or in many cases better) publication records. This is of course only a correlation, and there are several caveats to consider. First, to the extent that blogging serves to increase the RePEc ratings by increasing own downloads (as seen in our previous post) and citations, the observed correlation will be a lower bound on the causal impact of blogging. However, if bloggers are also more likely to be engaged in other activities of a public intellectual, such as media appearances, writing books etc., and if these don’t all arise directly as a result of blogging, the estimates will conflate the impact of blogging with the impacts of these other activities, thereby overstating the impact of blogs. Nevertheless, given the large magnitude of the coefficient observed, it does not seem likely that all of the observed impact of blogging just reflects omitted variables, and therefore we view this evidence as strongly suggesting that blogging increases the influence, respect, or public image of the blogger.

This is where we haven’t been able to find much evidence to date. A couple of days ago, Tyler Cowen discussed which intellectuals have influence, where he defined influence NOT as “influencing lots of other minds,” but as “changing the world.” He concluded that only a few intellectuals had influence defined this way and that “it is very hard to have much influence.” In political science, Drezner and Farrell (2008) provide a number of anecdotes about how blog posts have helped bring down powerful politicians or had other policy effects.

We don’t know of many such cases in economics. The one clear example that comes to mind is the case of Kiva – a person-to-person microlending website- where a blog post by David Roodman explained that the way Kiva actually operated was different to the way that it implied it operated – leading to a story in the New York Times and modifications in the website. This is a case of economic bloggers as expert journalists – bringing facts to a new story. Another case is where Michael Clemens from the CGD and Gabriel Demombynes from the World Bank wrote a new paper and then blogged about it questioning the evaluation of Jeff Sachs’ Millennium Villages Project. A flurry of responses from the MVP camp (and responses to those) followed, there was some media attention, and a debate was scheduled than cancelled. It’s hard to ascribe the flurry to the blog rather than the paper, although it most likely helped fuel the ensuing debate. However, it is also hard to decide what, if anything changed as a result. Some minds were perhaps changed, which may influence similar cases in the future. But, is MVP changing how they are doing things as a result? We don’t yet know.

We invite comments from readers, bloggers, and policy makers of other examples where blog posts have changed policy – particularly cases which have involved economic analysis, rather than just reporting.

This blog was originally posted on the World Bank Development Impact blog. The full working paper can be found here.