Mark Blyth became the accidental star of the political blogosphere last year when he appeared in a video promoting the key message behind his upcoming book ‘Austerity: The History of a Dangerous Idea’. Here he explains why being unreadable helps economists get their message across, how fan and hate mail have become part of his professional life and how his latest project illustrates that there is a market for academic ideas.

Blogging and social media are growing more popular amongst academics in the UK, yet many are still anxious about how to accurately express the message of their 10,000 word article or book into a much shorter blog post. How did you manage to distill the ideas that your new book, Austerity, deals with into a five minute video?

Truthfully, if an idea cannot be expressed in five minutes it’s probably not worth saying. I’ve been telling my graduate students that for years and I happen to believe that it’s true. Academics think that their ideas are complex when in fact they are oftentimes just complexly expressed. That is, disciplinary training and conventions demand that we express ideas in a specific language, relate them to ‘debates in the field,’ couch them as discrete hypotheses etc., all of which is fine and good, but it does tend to get in the way of the message.

For example, one of the reasons economics is more successful than any other social science discipline in getting its message across is that it’s unreadable. Really. Think about it. An article in economics has an abstract, usually in English, that anyone can understand. There is then a very short introduction before it dissolves into hyper-complex mathematics. If you skip all that, as almost all people in the policy world do, you then get to a very clear set of conclusions written in words-you-can-understand that ‘proves’ all the mathematics and the policy lessons derived therein. Compare that to the task of reading a 12,000 word discipline-intoned history or political science article that says “one the one hand, on the other hand…” and you can see why less is more.

Indeed, the problem for me was that the Austerity book began as a video. I said all I had to say in five minutes and now the task of turning that into a book becomes the arduous part. Yes, you can get into the details, prove contentions, etc., but at the end of the day does that make it any more impactful? That for me is an open question.

The video of your brief discussion of Austerity has been circulated on popular political and academic blogs in the UK months before it is due to be published. What impact has the use of multi-media video had both on your expectations for the text, and also, on your engagement with the public on the issues that your research raises?

First of all it’s a great advert for the book. However, since it came before the book and was not designed as a marketing piece for a book it does raise the pressure to get it out. But what it also shows is how there is a market – so to speak – for academic ideas. The two core ideas of the video (and the book) – that you can’t cure debt with more debt – and – that while any one state can cut its way to prosperity it can’t work if they all do it at the same time – are technically known as ‘trying to fix a solvency problem with a liquidity instrument’ and ‘a fallacy of composition.’ Start by posing the problem in that language and its dead to anyone who is not an expert in the debate already. Turn it into things people can understand, let go of the academese, and people will engage. The video was posted first on YouTube and was then massively reposted by Facebook. I got fan mail and hate mail from all over the world. If you want impact this is how to do it. The old days of doing an edited volume with your mates and publishing it a year and half later as ‘impact’ is increasingly a dead model in an era of social media.

Your use of multi-media technology is innovative. What role did your university, Brown University, play in this? Did you find in them support and innovation, or a fear of the unknown?

Hats off to Brown and the Watson Institute, it was their idea. Watson has a great media set up and they came to me and said “if you were to make a five minute video on topic, what would it be?” Give that the G20 meeting in Toronto had just come out with their ‘growth friendly fiscal consolidation’ nonsense, the choice of topic was obvious. So they hooked me up with a videographer, Joe Posner, we went back and forth on the script (he was great at teaching me how to translate my ideas into ordinary language), we shot it, and he added the animation. The university and the institute were supportive from start to finish. I think the key lesson here is this is how smaller institutions can overcome geography and scale and get their ideas, and thus their academic name, out there.

From your experience, do you think that multi-media tools will become a new, and perhaps prominent, form of dissemination of research to the public?

I think that it already has. Think of TED talks and the numerous spinoffs that they have encouraged. People at all levels and all walks of life are time constrained. If you have something important to say and can get it across in five minutes you will have a leg up on people doing a book or a special issue that is read only by insiders. Let’s push it further. Why do we have people with great ideas writing books and articles for publishers that almost no one ever reads? Mainly because of the rigors of academic promotion – getting your union card stamped. It’s a nice business model for publishers, especially on the journal side, but it helps keep the academy separate from the wider public discussion.

This is why blogs are also increasingly important. It helps people in the field know what other people are up to, to be sure, but it also helps your work to be found by journalists and others. Ten years ago I knew a tenure case where the candidate was (rumored to have been) denied in part because they did this frivolous ‘blogging’ stuff. Ten years later I know of a case where it helped seal the deal for promotion.

Blogs with a more academic slant (crookedtimber.org being the best example) get work out to a wider public much faster and to many more readers. I’ve done on line seminars on books and specific topics in this manner and it’s great for feedback and impact. In short, I think that we are already there. Ten years from now closed-source academic journals will exist to the extent that tenure committees need warranties. Other than that we will largely live in a world of open source and multimedia.

What do you think the role of academics should be when engaging with the public?  Economic issues, particularly those underpinning austerity measures are dominant across government, society and media. How do you hope your research will impact on these?

I like to think of the social role of the academy as two fold. First, as knowledge generators, which is obvious. Second, as the ‘BS police,’ which is non-obvious and just as important. Our job is to test the ideas out there in the world that are being used to guide policy and say ‘yes, that passes the smell test’ or say ‘no, upon inspection, that’s BS and here’s why’ which is what the Austerity project is all about.

More broadly, and I can only speak from my area of knowledge, folks who get into the study of political economy do so (by and large) because they want to understand how the world works. Since this is inherently non-obvious, all their work should be of interest. The problem is that either disciplinary obsessions and intellectual ghettos develop where publishing on topic X is rewarded no matter how banal the research, or (increasingly) new graduate students get so ‘teched-up’ that they are unable to say anything to anyone unless there is a readily available dataset and a series of standardized statistical techniques that can be applied. Again, this results from the reward structure of disciplines and not from the nature of academic ideas themselves. The incentives are changing due to the world changing around the disciplines, but we call them ‘disciplines’ for a reason: this is exactly what they do.

Economic issues that therefore just one area where the academy has a contribution to make. Public health, environment, energy, sustainability, conflict and violence – the list is literally endless – as are the possibilities. Academics have hoped for generations that our ideas impact the world but very few succeed. Now there are technological ‘leg ups’ for those who choose to use them.

First impressions of Google Scholar Citations are good: it’s easy to use and accurate 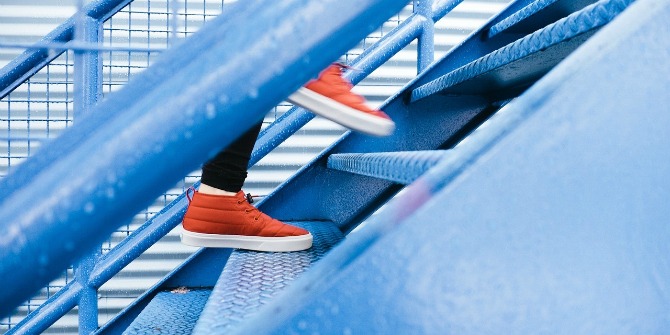