The impact of economics as a discipline over other subjects can be identified through the number of mentions in the New York Times, according to economist Justin Wolfers. But what do these figures actually measure? Philip Cohen takes a closer look at the comparison. If there has been a surge in economics, this may be more to do with the Times’ business strategy than anything else. On the issue of audience and impact, it’s worth asking what sociologists are speaking about, and to whom.

The economist Justin Wolfers, writing for the New York Times Upshot, reports that economists increasingly outnumber other social scientists in mentions in the both the Times and — even more — in the Congressional Record. About 1% of Times stories use the word “economist,” more than three-times as often as they write “sociologist.” Here’s his figure tracking Times references: In the Congressional Record the economist-sociologist ratio is 20-to-1. I’ll show some other numbers, but first a little setup. Wolfers writes, pretty reasonably:

Most striking is the poor showing of sociology, whose relevance to policy makers appears to be minimal, even though it focuses on many of our most pressing problems, including families, crime, education, aging, religion, community, inequality and poverty.

Of course, sociologists, whose comparative advantage is in offering structural explanations, might point to the fact that their field has no equivalent of the business pages, that the president does not receive advice from a Council of Sociological Advisers, and that there’s little demand from Wall Street for sociological insights. Perhaps, although topics like crime, family and faith are grist for the daily newspapers; an array of federal agencies are responsible for dealing with topics like housing, education, labor and human services; and Silicon Valley is hungry for insights from sociologists who study networks.

As my co-editor Syed Ali wrote recently about Orlando Patterson’s op-ed in the Chronicle of Higher Education, sociologists are used to hearing about our irrelevance. Elizabeth Popp Berman pointed out on Orgtheory, however, that we can’t explain this pattern just by looking at sociologists. Economics in particular has been the beneficiary of a long campaign that includes academic expansion, political institution-building, and — Syed adds — political centrism or conservatism.

One result of that development is there are a lot more people outside of academia whose job title is “economist” than there are “sociologists.” So Wolfers’ use of “economist” versus “sociologist” catches all those non-academic economists, while the non-academic sociologists may be more likely to have other titles. To choose one example, Pew Research Center analysts are frequently in the news, with titles such as “Senior Researcher” (Gretchen Livingston and Wendy Wang), “Demographer” (Conrad Hackett), and “Research Associate” (Besheer Mohamed) — all of whom have PhDs in sociology.

Don’t get your hopes up, but I reran the trends in the NYT‘s Chronicle tool using “professor of economics [etc.]” and “economics [etc.] professor,” to narrow the comparison of references down to academics. This really boosts the standing of political scientists, sociologist, and historians, relative to economists. Here are the trends for those terms: 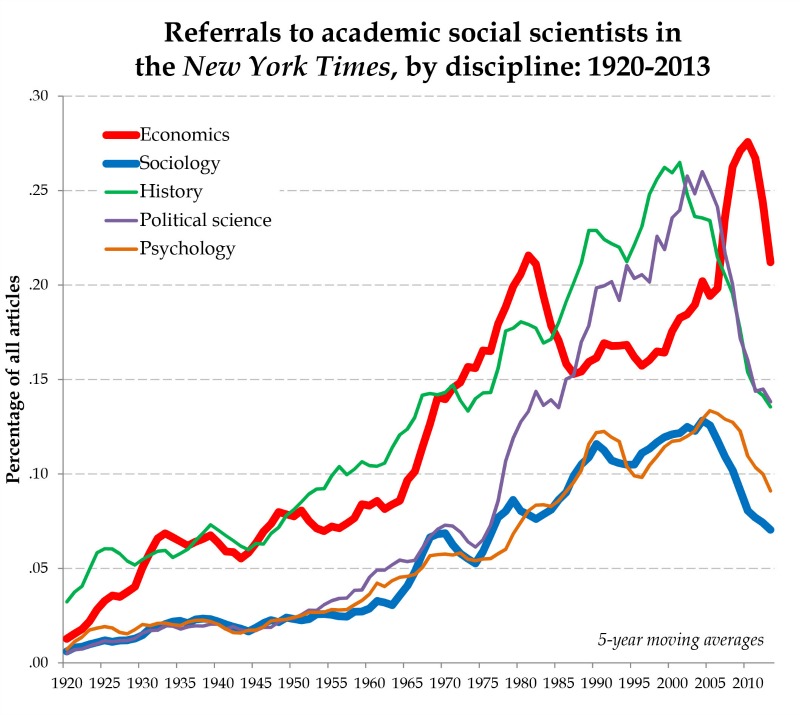 I have to mention that, besides our dickering over disciplinary feats, we should notice this is an amazing image of the growing influence of academic social scientists, who increased their representation in the Times about 10-fold over the last century. (I excluded 2014 because the data appear to be messed up.)

Anyway, by this accounting, academic historians were running about equal with economists until the mid-2000s, and political scientists had a good couple decades as well. (Psychologists — another profession with a major off-campus presence — are now down around sociology’s level.)

We need sociology to understand this

Wolfers looks over the whole trend and grudgingly declares victory, “This economist is drawn to conclude that … our popularity reflects the discerning tastes of our audience in the marketplace of ideas.”

It would be sour grapes to argue with that. But not everyone is shopping in the same marketplace. So part of the issue is, what’s the audience? The Times is an organization, and a for-profit corporation. It influences public opinion, and it is an authoritative source of information, but it is not a neutral reflector of the marketplace’s ideas. And as an organization, it has a history.

Look especially at the last decade. It’s hard to tell from the last figure, but between the 1930s and the 2000s academic sociology was actually closing the gap with economics, with the econ/soc ratio falling by about half. Here’s that trend highlighted: The long-run trend was completely erased after 2005. In fact, if you look back at the previous figure you can see all but economists being run off the pages after that point.

What is the context? Wolfers is an economist, of course, writing in a high-profile new section that prominently features economic writing. How did we get here?

The paper was shaken by the Jayson Blair scandal in 2003, and then by a scandal over planted stories about Iraq’s supposed weapons of mass destruction leading up to the U.S. invasion. The newspaper business was collapsing. From November 2003 to November 2008 the company’s stock price fell 90%. It reorganized and consolidated, laid off reporters, cut sections, and increased web publishing and ad sales. In 2008 they promoted William Schmidt — who was in charge of newsroom finance and administration — to deputy managing editor, replacing Jonathan Landman, who became culture editor.

The Economix blog was launched in 2006. Today’s Upshot (which subsumed Economix) is edited by David Leonhardt, who was an economics columnist before he was promoted to Washington bureau chief in 2011. That promotion was a dramatic move, elevating an economics writer who hadn’t been a Washington political reporter. Upshot is a “data journalism” hub, which often (but not always) implies an economic focus. (On the opinion pages, economist Paul Krugman writes a column twice a week, and Joseph Stiglitz moderated a long series on inequality.) This can’t be the whole story, but in broad strokes it’s fair to say the paper as an organization moved in the direction of business and economics.

On the issue of audience and impact, it’s worth asking what sociologists are speaking about, and to whom. I actually think that on the list of issues Wolfers mentioned — education, aging, religion, community, inequality, poverty, crime, family, faith, housing, education, labor, and human services — sociologists are cited pretty frequently. Maybe part of the issue is that those subjects need more attention from the Times. Last year I counted 124 academic sociologists cited in the Times’ pages for the year 2013, using a Lexis-Nexis search for “sociology or sociologist” within 10 words of “professor,” and then excluding letter writers, obituaries, weddings, and event announcements. I redid that search for the year 2014, and this time I found 148 sociologists. These people were cited in news stories, or wrote op-eds, in which they were identified as academic sociologists: This is a conservative count, but I don’t think I missed too many (feel free to add names or links in the the comments — don’t be shy). Now added: Hector Cordero-Guzman, Fabian Pfeffer, Kristi Williams.

Finally, it’s worth mentioning gender. I previously reported that two-thirds of Times articles are written by men. The Business, World, and Opinion sections are all more than 70% written by men, while women write the majority of stories in five sections — Fashion, Dining, Home, Travel, and Health — which account for 11% of all stories. I can’t be sure, but it’s possible more sociologists would be cited in the paper if more women were writing the news.

This piece originally appeared on Contexts and is reposted with the author’s permission.

Philip Cohen is a professor of sociology at the University of Maryland and author of The Family: Diversity, Inequality and Social Change (W. W. Norton, 2014). He is the co-editor of Contexts.

Librarians and curators are key partners in enabling innovative approaches to digital scholarship.