British voters went to the polls this week for the 2015 UK general election. Lambros Fatsis takes a sociological perspective on the voting process by assessing how citizens choose to exercise their vote. He writes that there are both ‘civic-oriented’ and ‘culture-oriented’ explanations for how citizens make their choice and that understanding this process offers a greater understanding of our political identity.

This piece originally appeared on EUROPP.

Millions of British citizens will be asking the question: “who/what do I vote for?” But does this question enlighten our thinking, or does it obscure our political imagination? While figuring out what to vote for is obviously important, much of the answer actually depends on how we vote. This is a fundamental, yet largely overlooked aspect of voting – and the lack of an answer to the question of ‘how’ we vote is detrimental to our political thinking and civic culture.

The ‘how’ side to voting is important because it allows us to explore the background of the very ideas, impressions and reflexes that inform our political decision-making. In doing so we come to recognise ourselves as vital ‘thinking’ components in the body politic, rather than as passive receptors of whatever is on offer or displayed publicly.

Probing not just what we think about the pledges, manifestos, promises and proposals that competing parties direct at us, but also how we come to think about the credibility, validity, sensibility, tone, and content of what is said, empowers us as voters. By assessing this question we are thereby honouring parliamentary democracy as a festival of and for citizens, rather than as a mass spectacle of public entertainment, in which we are reduced to the role of mere spectators instead of authors of our political community via our vote.

In the context of last week’s general election, this means adopting a productively critical outlook towards ‘infuriatingly vague’ and ‘pointlessly catch-all’ pledges, as Zoe Williams brilliantly put it, in order to concentrate on judging contestants based both on what they say as well as what they do when they advertise their “commitments” in their manifestos or their televised appearances. This process can be likened to an imaginary tribunal where we have control over the conditions in which we consume the political rhetoric of parliamentary candidates.

Rather than allow ourselves to be swayed or mollycoddled by the inflation of hopes and the manufacturing of hype, we can invest instead in the deflation of irresponsible, ceremonial political rhetoric. This allows us to adopt a critical analysis by filtering proposals that may have an emotional structure but lack a concrete plan, resisting attractive slogans that generate more heat than light, and refusing to allow our parliamentary representatives access to our worst fears, insecurities and vulnerabilities. Instead we can demand that politicians address our critical faculties and civic sensibilities.

This means gathering information, commentary and opinion, but in the words of the seventeenth-century philosopher Francis Bacon, we should act not like ants, who simply collect “facts”, nor like spiders, whose webs originate within themselves by means of prejudice, short-sightedness and self-referentiality; but instead like bees who search for meaning, but also transform it through the use of critique and argument in order to pollinate and fertilise otherwise impregnable political strongholds.

How do citizens vote? One answer in five steps

Having raised the central question of how UK voters choose to vote, there are at least two routes through which we can hope to provide an answer. The first is a “civic-oriented” one, appealing to our conscience as members of a political community in which we wish to have a say by offering a checklist for voters. The second is “culture-oriented” and aims at attuning us to more experiential, if not aesthetic, aspects of public social life by offering an allegory that might sensitise us to the virtues of deliberative democracy, political involvement and public participation.

In terms of the civic-oriented approach to voting, this is organised around five steps. The aim of these steps is to generate further questions which can hopefully allow us to identify the basic shape and form of our voting identity. The first step is investigative and invites us to reflect on what we stand for and against, what we think politics is for, where we stand across or outside of the political spectrum, and what kind of polity or society we wish to live in.

The second step is substantive, urging us to think about whether we vote emotively, ideologically, strategically, in blind faith, fatalistically, vengefully, or in accordance with a sense of civic duty. What is required in this step is the ability to be fair-minded in making decisions in a way that will potentially result in determining specific options, such as policies on certain issues, as outlined in the various parties’ programmatic declarations.

The third step is interpretive and asks us to contemplate the intentions behind what our vote may be, as a way of identifying what exactly we try to express through our vote. During this process we might wish to determine how we situate ourselves in the overall political discussion that is taking place, whether we vote to flaunt ideological/party credentials, whether we vote to protest against opposing camps, and whether we might be voting against previous unsatisfactory choices we may have made in the past.

The fourth step is soul-searching/ parrhesiastic. This refers to ploughing the depths of our political reasoning by demanding that we are honest, courageous and forthright in answering how/whether we might identify with the way parties portray us. Are we “the people” and do we understand ourselves as a collective group or as a superior select group (or even a ‘snobbish elite’)?

Do we see ourselves as subversive revolutionaries, idealists and reformers, or might we be part of a largely disenchanted and marginalised group? In answering what kind of “electorate” we might be, we also ought to decide whether we want to be passive spectators or actively involved citizens, which in turn begs the question of whether we would describe ourselves as self-oriented or public-spirited, and how accountable/responsible we are or wish to be for the choices we make at the ballot box.

The fifth and last step is practical, pragmatic, and selective, summoning us to decide who to vote for by using as our criteria the answers we have given to the previous four steps. Do we reward those who channel the electorate’s frustrations, or might we instead support those who foster alarmism and moral panics around emotive issues? Can we side with those who offer novel/radical ideas, or will we settle for those of a more moderate persuasion? It is at this point that a classification of parties according to the dominant characteristics of their discourse becomes useful.

One more answer in one picture

The ‘culture-oriented’ explanation of voting requires more of a leap of the imagination. To take some cultural inspiration, we can look to Ambrogio Lorenzetti’s famous series of frescoes, The Allegory of Good and Bad Government. Lorenzetti’s work occupies an entire room where the visitor finds not only a Renaissance masterpiece, but also an illustrated theory (theoria = viewpoint) of vices and virtues associated with good and bad government.

Wisdom, justice, concord, peace, fortitude, prudence, magnanimity, temperance, justice, faith and hope are praised as the virtues of good government; whereas pride, avarice, vainglory, cruelty, deceit, fraud, treason, divisiveness and war are identified as the vices of bad government, complete with warnings of how a city can be destroyed as a result of harmful political decisions. The moral of Lorenzetti’s story is that citizens must carefully balance the features of good and bad government with the potential effects they may have on a community. Citizens decide accordingly by assuming responsibility for honouring or betraying our civic commitments as citizens of a polis – be it 14th century Siena, as in the case of Lorenzetti’s frescoes, or our modern day local electoral ward.

Part of ‘The Allegory of Good and Bad Government’ by Ambrogio Lorenzetti, Credit: Steven Zucker (CC-BY-SA-3.0)

Lorenzetti’s invocation to be virtuous citizens on the one hand, but also aware of the vices of political representation on the other, remains an evocative and powerful image. It is also reminiscent of the comments of another figure from history: Diodotus, who bitterly complained, in Thucydides’ History of the Peloponnesian War, that while political speakers were held legally accountable for the advice they gave in public, listeners were not held accountable for the decisions they made in turn.

Whether we take inspiration from Lorenzetti’s Renaissance Tuscany or Diodotus’ Classical Athens, we may uncover one potential explanation of how citizens choose to vote. Of course uncovering this information would be somewhat incidental if we did not decide to take our ideas and convictions to our nearest polling station on Election Day.

Dr Lambros Fatsis teaches Sociology at the University of Sussex. Since 2012 he has been commenting on the Eurozone crisis from the ‘Sociologists of Crisis’ column for The Sociological Imagination online magazine. 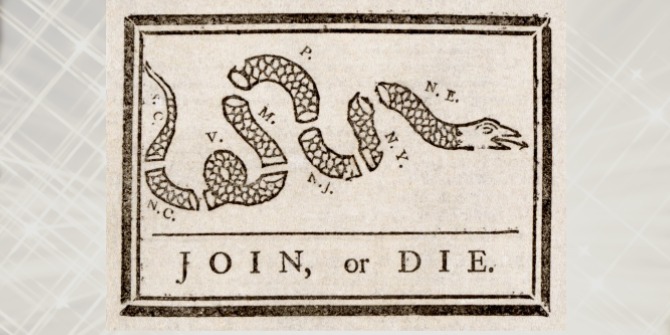 Impact Round-Up 24th May: GitHub for science, research in the national interest, and myths of ‘big data’