Meghan Froehner recently spoke to Cynthia Sanborn, the Director of the Centro de Investigación de la Universidad del Pacífico (CIUP), and Maria Balarín, an Associate Researcher at the Grupo de Análisis para el Desarrollo (GRADE) on gender dynamics in think tanks and research positions. The researchers offered their views on issues such as overt and subtle biases, the role of care, and possible strategies for addressing gender issues in the workplace.

As a former student of gender and development and a researcher with experience in a women’s policy think tank in Washington, D.C., I developed a series of questions as a prompt for women on the role that their gender identity plays in the workplace. Are there barriers to women succeeding in think tanks? If so, what are they? Are women funnelled into certain policy issues or do they themselves choose to work on different topics than men? Does gender shape the way discourse and research is developed? Do men and women apply different methodologies?

I spoke with Dr Cynthia Sanborn who provided her perspective as Director of one the top think tanks in Peru (CIUP). I also had the opportunity to speak with María Balarín of GRADE and author of a useful chapter in the group’s recent publication that reviews the international literature available on women in the social sciences. Both women are involved in Grupo Sofía, a voluntary organisation that works to improve the visibility of women in the social sciences in Peru

How do you recognise and deal with sexism and discrimination within an organisation?

Sanborn spoke about discrimination and casual sexism that still pervades in Peru. She noted that there seems to be a generational shift away from direct forms of discrimination, with younger male workers adopting more egalitarian views of their female colleagues. What does persist are more subtle barriers to women advancing, such as being overlooked in meetings or in the organisation of conferences and assumptions about researchers’ commitment to their work when they adjust their schedules around care activities.

She argued that a key tool for recognising barriers and raising awareness, which is at the unique disposal of research organisations and think tanks, is having discrimination as an issue area for research and debate. CIUP has, indeed, had discrimination as a line of priority work for six years, conducting both testimonial and experimental research as part of the Peru Sin Discriminación project. Sanborn believes that research in this field has helped to raise staff’s sensitivity to gender disparities, as well as racial and ethnic differences among others.

What are the pipeline issues for women in think tanks?

Part of the problem of today’s underrepresentation of women in senior positions is a lack of a pipeline of female scholars in the past. Another aspect of this issue is that there is now more competition in Peru for talented scholars in the public sector and women are being courted by new government agencies such as the Ministries for Social Inclusion and the Ministry for Women’s and Vulnerable Populations. A final challenge to the pipeline has to do with where women see openings for themselves professionally now and in the future.

Women might not imagine that they would get the professional support they need at institutions when they do not see other women working. This dynamic is played out in how women are represented in research areas within the social sciences as well. Women tend to be more highly represented in the fields of anthropology, sociology and social policy while steering away from more male dominated fields of economics, public works and engineering, and foreign policy.

CIUP has tried to address these pipeline issues by making conscious efforts to help women researchers feel supported and not marginalised within the institution. They do this by engaging women researchers in CIUP activities, promoting them for grants and graduate studies, and supporting their work for publication.

How do think tanks treat workers with care responsibilities?

Echoing commentary from Priyanthi Fernando, Sanborn points out that in theory, research positions can be more family-friendly than in other sectors, because key phases of the work can be carried out from home or from anywhere with a computer and internet connection and at any time of the day.

There is much less need to be in an office everyday than other fields, especially in the writing stages, which is largely an individual process with collaboration taking place in the form of edits and commentary sent via e-mail. However, the implications of this can be that work runs into all parts of personal life and become a twenty-four hour practice. Additionally, in the case of university-based think tanks, such as CIUP, where teaching is a big part of researcher’s duties, or for thinktankers whose positions involve other duties like management, outreach or research dissemination, more time in the office might be a necessity.

Sanborn mentioned that women may be more comfortable asking a woman supervisor to exercise flex-time options, which underlines that having more women in leadership positions will help perpetuate more equitable representation of men and women.

She has noted an uptick in men also requesting flex-time for care activities in recent years and hopes this indicates a shift towards more equitable divisions of care. A cultural shift towards more equal sharing of care labour, although beyond the scope of institutional interventions, would relieve pressure for women to compete in a predominantly male breadwinner model in the workplace, where workers are assumed to be fully supported by a committed household and with no responsibilities of their own beyond formal work.

Selected Findings from Maria Balarín’s paper on women in the social sciences:

My conversation with María Balarín of GRADE began with a discussion on how to structure thinking around women’s participation and ascension in think tanks. An essential consideration, Balarín noted, is that think tanks, in contrast to academia for example, do not have a clear career progression. The lack of a structured career path and the fact that think tankers can come from highly varied backgrounds makes identifying challenges in the achievement of gender equity a complex project.

It is worth noting some of the key findings from her study [pdf] as they provide critical insights into the nuances of the nature of women’s experience in academia -and also applies to many think tanks:

What steps and interventions are effective for increasing women’s presence and influence and improving gender equity?

This is the fifth post from a series running at OnThinkTanks on Women in Think Tanks (join the discussion on #womeninthinktanks), edited by Meghan Froehner. This post was written by Meghan, on this this occasion based on interviews with Cynthia Sanborn, Director of Universidad de Pacifico’s research centre (CIUP), and Maria Balarín, Associate Researcher at the Grupo de Análisis para el Desarrollo (GRADE). The series is accompanied by a Topic Page on Women in Think Tanks. If you would like to edit a series please get in touch.

Meghan Froehner is a research consultant specialising in gender and development. Most recently, she worked with the Institute for Women’s Policy Research in Washington, DC analysing the role of gender and care burdens for post-secondary students in the United States. She holds a Master’s degree in Gender and Development from the Institute of Development Studies in Brighton, UK. 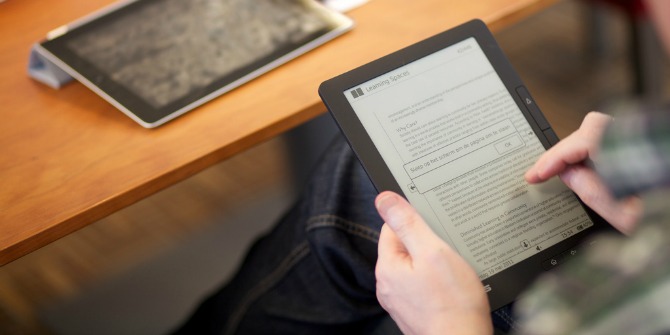 Five minutes with Conor Gearty: “It is very frustrating that my online project The Rights’ Future counts for nothing in my professional life. It is not teaching; it is not scholarly research; and it does not have impact”.

Five Minutes with Tim Gowers and Tyler Neylon: “The boycott has made Elsevier more concerned about its public image”.