What are the conditions needed to create real engagement via social media? Heather Doran shares three case studies of successful public engagement. All three examples highlight that building an engaged audience doesn’t happen overnight and requires flexibility, training and a targeted communications strategy. True public engagement with research should be a two-way street.

The use of social media by researchers is generating large amount of interest. Billed as a career enhancing tool and an opportunity to share research work with the world, there are many potential benefits. However, there is also a large amount of risk. I’ve had lots of positive experiences through social media platforms. This began when I was working towards my PhD and, as a result, I have been invited to speak and organised training courses for fellow researchers. I currently work in Public Engagement with Research at the University of Aberdeen and one of my interests is how engagement can occur via social media.

This summer I headed out on a fact finding mission to discover examples of quality public engagement taking place via social media. The project, funded by the Winston Churchill Memorial Trust, focused on engagement with science. It was a fantastic opportunity for me to build on my own personal experiences in this area. My main goals were to find out what needs to happen in order for researchers to generate engagement via social media platforms.

I’m heading to US, China & Japan to research #scicomm on social media. Be part of my plan http://t.co/P3Qi7NSzCY pic.twitter.com/o6WQ0kDyIP

Here I pull together a number of examples of online engagement that I have explored. They all happen to have occurred via Twitter which is a powerhouse for two-way engagement. I was looking (and will keep looking) for examples beyond this platform but for now, here are the examples I thought were particularly interesting and have key learning points for others looking to engage.

The first project I want to discuss comes from the Union of Concerned Scientists  (UCS) in the USA. They are a science advocacy organisation that exists to utilise science for a “healthy planet and safer world”. They pay close attention to policy and legislation in the USA and they engage with scientists and the public in order to bring about change.

I spoke to them about a great drive they led to call out food industry misinformation around sugar and health. They adopted a new hashtag for this campaign that was carefully crafted by Deborah Bailin “to grab attention in a space where people’s attention spans are shorter and shorter, to get your message across” and importantly because it was amusing. The hashtag #bullsugar was born.

They used this to generate discussions and get backers for the campaign. The hashtag also allowed them to track online discussions and follow public opinion. They organised several Twitter chats with scientists in partnership with existing parent networks, including ‘Moms Rising’ who have over 41K Twitter followers. These chats generated interest and engagement far beyond the @UCSUSA account.  By adopting this partnership approach with a careful crafted hashtag and content they engaged with a much wider, and targeted audience.

The moms network set their own agenda, asked their own questions and set the timing of the online chat. This is incredibly important when trying to generate an online discussion, especially with a new audience. This created maximum engagement and exposure for the hashtag and issue being addressed. It was a great success, with over 1700 tweets on the topic and 26,800 signatures for their drive.  Too often accounts try and direct Twitter chats according to what is easy for them, as the hosts. Accounts should be prioritising what is best for their target audience and that can mean hosting discussions and comments beyond traditional office hours.

It’s time to stand up for science on added sugar. RT to make sure @HHSGov @USDA see past industry #bullsugar! pic.twitter.com/SLT6oKzPAK

Before launching this campaign the UCS had clearly set out what they want to achieve and how they wanted to get there. It would be unfeasible for them to spend time generating new specific audiences for each particular drive that comes their way (they can work on projects from climate change to antibiotic resistance). Therefore their approach which involves engaging with existing networks generates a large reach, faster.

I think there is a real lesson here for academic researchers who wish to gain some of the benefits through engagement via social media but cannot dedicate time to generating their own audience or for researchers that wish to engage with several audiences outside of their usual network. One criticism of individual researchers communicating via social media is that their discussions only reach their peers rather than a public audience. This can be incredibly helpful for their own career development and progression and help them solve technical problems quickly.

Building a large, engaged audience isn’t easy on social media and requires a large time investment as well as carefully targeted communications. Working with partners can increase your reach and generate engagement quickly. A word of warning for this approach though – you do have to put the effort in to generating the partners before you can access their network. I got a great quote from this discussion:

you wouldn’t turn up to someone’s offices waving around a new petition for them to sign or an event that you would want them to go to. What is it that makes people think it is OK to do that on social media?

The next example I want to discuss is so obvious I almost didn’t mention it but I think their forward thinking approach is worth not glossing over. NASA are a huge organisation but social media is embedded within what they do and they support from within to enable their scientists to communicate and interact with the public. They have a diverse organisation and large selection of social media accounts and many drives for interaction such as #asknasa. I spoke with the deputy head of social media, Jason Townsend, who as well as leading in communications for NASA advises others on how to put forward a social media presence and interact with an audience. This support is important in generating online engagement.

They also launched, in 2014, an internal science communication training leadership programme for scientists. This was spearheaded by Sarah DeWitt and aims to further Nasa’s engagement with the public. The availability of training and experts that can advise those that wish to engage is extremely valuable in the online environment. There are an unlimited number of networks and changes in the networks happen frequently. Having expertise on hand to advise and support scientists and researchers to help them further their engagement is an important basic need.

More info on the science leadership programme can be found here.

The third example I wanted to mention is a little closer to home, in Dundee. The Centre for Environmental Change & Human Resilience Twitter account @CECHR_UoD is an extremely interactive account that shares news from the centre and related communications. They have generated their own, large virtual audience as part of their everyday communications. This account doesn’t only disseminate information but also responds and engages with their audience.  Importantly they do not share only news from their centre, they source and share news and comment articles from a wide variety of places. This makes their account a centre of expertise that people follow to keep up to date with advances in that area.

This is a change in mind-set as often accounts that represent institutions, organisations and groups use social media to communicate only about themselves. This more flexible approach which involves the curation of information from wider sources has helped them raise their profile on social media as a centre of expertise. The account is led by a communications team within the centre, Louise Henderson and Tracey Dixon, who are embedded in the research centre and have a background in related research. This enables them to quickly understand what is important and respond to their audience. They also have close contact and communication with the research scientists – linking everything together.

A general observation that I have made when looking into this area is that a lot of great engagement occurs when researchers and communicators work in partnership. This approach helps boost the confidence of the researcher regarding online engagement and minimises the time they have to spend generating a ‘public’ to engage with.

One thing I would like to see more examples of is how these online interactions can help enhance research. True public engagement with research should be a two-way street with potential benefits for both sides. One area I did see an example of this was the close links between the public and research that can be created through a crowdfunding project. But that’s a whole new discussion for a new set of blog posts (or several)…

Heather Doran (@hapsci)  is a Project Officer in Public Engagement with Research at the University of Aberdeen http://www.abdn.ac.uk/engage. She is particular interest in how social media can be used as a tool for public engagement with research. She maintains a blog on thoughts around this and her Winston Churchill Fellowship at http://www.heatherdoran.net 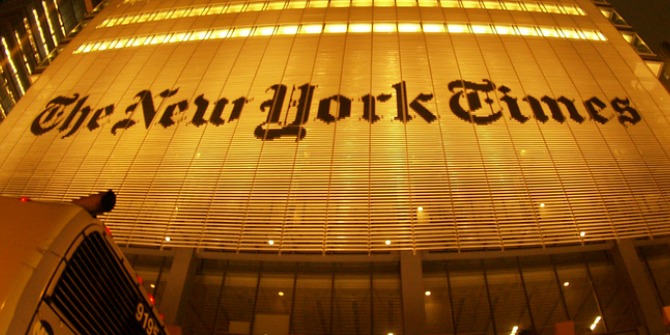