How does academic research feed into the parliamentary process? Analysing the impact case studies of the 2014 REF, Caroline Kenny draws out potential lessons on how Parliament is currently engaging with academics, and how it might in the future. Impact case studies referring to Parliament were found in all four of the main subject panels, but 45 per cent of the cases came from Panel C – the social sciences.

The impact case studies, submitted as part for the REF, tell an interesting story about how UK academia interacts with policy at a local, national and international level. Over 40 per cent of cases mentioned impact on policy as part of their narrative.

I wanted to look at this impact on policy in more detail but with a particular focus on impact on Parliament. As some background, I’m one of the advisers in the Social Science Section within the Parliamentary Office of Science and Technology (POST). The Social Section was set up in partnership with the Economic and Social Research Council and with the support of University College London. Our role is to provide a source of independent and accessible analysis on issues that Parliament deals with as part of its day to day work. We publish short accessible summaries of research literature of key topics called POSTnotes; we work closely with Select Committee staff to help ensure their inquiries have access to a broad evidence base; and we are involved with cross-house initiatives of capacity building within Parliament on the use and usefulness of research.

Looking across all four of the main subject panels, I found that 20 per cent of impact case studies, 1,282 in total, outlined a substantive engagement with Parliament. An encouraging finding for someone who works here.

How are academics engaging with Parliament?

I found 23 different ways that academics were engaging with and having an impact on, Parliament.

Which parts of Parliament are academics engaging with?

The impact cases described engagement with all organisational parts of the Houses, 22 different sections in all, showing an openness and engagement with research across the whole of the day-to-day work of Parliament.

As Figure 1 below shows, the key ways academics interact with Parliament are via individual MPs and Peers or via Select Committees, usually by giving either written or oral evidence as part of inquiries.  Relationships with individual MPs and Peers varied with some academics clearly building long term links with MPs on a particular topic or region. Unlike government officials many MPs are in post for a long time, allowing these relationships to build over time. One MP – Caroline Lucas MP – was referred to in all four of the main subject panels.

Figure 1: Parts of Parliament referred to in the impact case studies

Who is engaging with Parliament?

As well as which bits of Parliament academics were engaging with and how, I wanted to know the subjects and universities that were doing all of this engagement.

Impact cases referring to Parliament were found in all four of the main subject panels, although 45 per cent of the cases came from Panel C – the social sciences.

Universities that are engaging with Parliament

Looking at how the cases are spread across universities, 135 out of 154 higher education institutions mentioned engaging with Parliament in at least one of their impact case studies. (The 18 that didn’t tended to be small and specialist research institutions.)

Figure 2: Universities referring to Parliament in the impact case studies

Figure 2 shows the density of universities with case studies mentioning Parliament in each region of the UK. As you might expect, universities in London have the most cases, followed by universities in the South East. Universities in the north east and north west come in after. This is an interesting finding considering discussions of devolution to the regions and the ‘northern powerhouse’, of which universities are playing a key part. However, it is worth bearing in mind that some universities submitted more or less impact case studies depending on the number of staff they put forward and so this is likely to influence these figures.

So why am I doing this? All of this is part of a wider study that I am leading to look at the ways that research feeds into Parliamentary processes. Analysing the impact case studies can draw out potential lessons for Parliament on how it is currently engaging with academics, and how it might in the future. It can also inform the academic community on the ways that researchers are currently engaging with Parliament.

More details about this and other research will be discussed at an event called Research Impact and Parliament that will take place in London on Monday 2 November. There is currently a waiting list for places for the event, but the event will be recorded and a podcast available after the event. Or you can follow the discussion using the #POSTRIAP hashtag.

A paper by Caroline Kenny, Shanna Marrinan, Elo Luik & Samuel Murison on this research will be presented at 2016 Political Studies Association conference.

Caroline Kenny is a Research Associate in the department of Science, Technology, Engineering and Public Policy (STEaPP) at UCL. She is seconded full time to the UK Parliamentary Office of Science and Technology (POST) as a social science adviser. This position is funded by the Economic and Social Research Council. At POST, Caroline leads a research programme to study the use of research evidence within parliamentary debate and scrutiny, including the impact of POST. Prior to joining POST, Caroline worked for UCL Institute of Education studying the use of research in policy and practice and has supported policy-makers and practitioners in education from across the UK and Europe to use research in their decision making. Caroline has a PhD in Political Science from the University of Birmingham. 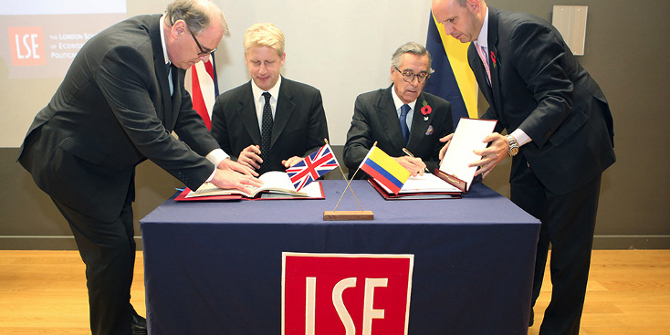