Kudos is a web-based service that aims to increase the visibility of academic publications and their eventual impact. Charlie Rapple provides background on why Kudos was created and what the team have learned since its launch in 2014. The service looks to provide a clear picture to researchers, publishers and institutions of how to optimise their communications activity. Recent investigations suggest when researchers explain and share their work, it can increase downloads of the full text by 23%.

A common enough scene: people at a conference discussing Big Questions, from how to improve the usage of the “long tail” of research, to which social network works best for researchers. Less commonly, the talk doesn’t end when the bar closes. It’s 2012, it’s London, days after the end of the Olympics, and “can do” is in the air. A decision is taken to Do Something. Kudos has been conceived.

What challenges were we trying to tackle?

To be able to carve out time for communications, researchers and those around them needed to (a) evaluate publication performance in the round, across a range of metrics and (b) understand how that performance had been achieved. It seemed that when authors took steps to share their work – via social media, say, or email – those works benefited from higher downloads of the full text on the publisher site. If we could put those datasets together, we could help all parties optimise their communications, by providing intelligence about which activities seemed most correlated to improvements in meaningful metrics such as new readers, or additional citations.

How did we do it?

We built a platform for researchers to explain work in plain language and manage efforts to share it – a sort of Hootsuite for academia, with publications metrics added alongside communications metrics. This enabled us to map data about how, when and where work was shared against daily counts of (for example) downloads; we could then show researchers, publishers, libraries and societies which tools and networks seemed most effectively to increase the visibility and impact of publications. 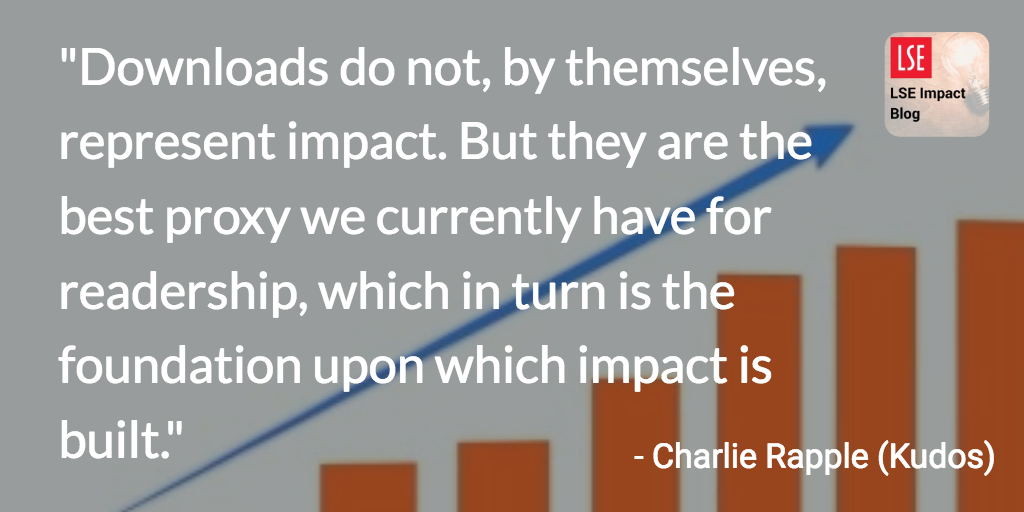 The platform launched in May 2014, and since then over 100,000 researchers, 65 publishers, 6 institutions and 9 societies have signed up. We have also partnered with the Altmetrics team at the Centre for HEalthy and Sustainable CitieS (CHESS), Wee Kim Wee School of Communication and Information, Nanyang Technological University (NTU, Singapore) to analyse the data compiled so far. Their publication is still in press, but some early results are shared here.

The key research questions were: do efforts to explain and share work increase downloads? Which platforms are most commonly used, and which are effective? And the simple answers are: yes, and while researchers are most likely to use Facebook to share their work, links shared via LinkedIn are more likely to be clicked.

We started with a pool of 22,170 publications that had been explained and / or shared via Kudos. Publishers had provided us with full text download data for 4,867 of these. (Of our publisher partners, approximately 10 are currently able to supply us with daily counts of article-level usage). We created a control group of publications for which these publishers had supplied us with usage data, but for which the authors had not explained or shared the work via Kudos. We noted the download count on the day that the publications were added to Kudos and analysed the growth in downloads between those dates and the date of the analysis. In looking at which channels researchers most commonly use for sharing, we had to bear in mind that Kudos was not integrated with LinkedIn until July 2015 – for that question we therefore reduced the dataset further to 2,488 publications that had been explained / shared via Kudos after July 2015 and for which we had data for full-text downloads.

What surprised us along the way?

When we analysed the proportion of publications shared by each of the three main social media channels (Twitter, Facebook and LinkedIn) we discovered that 62.5% had been shared via Facebook, against 38.0% via LinkedIn and 34.2% via Twitter (figure 1 – each publication can be shared to more than one channel). It is commonly assumed that Facebook is primarily a personal communication channel, and that professional communications are more likely to take place on LinkedIn or Twitter; our initial finding here suggests that such personal:professional boundaries are blurring, and bears further investigation. 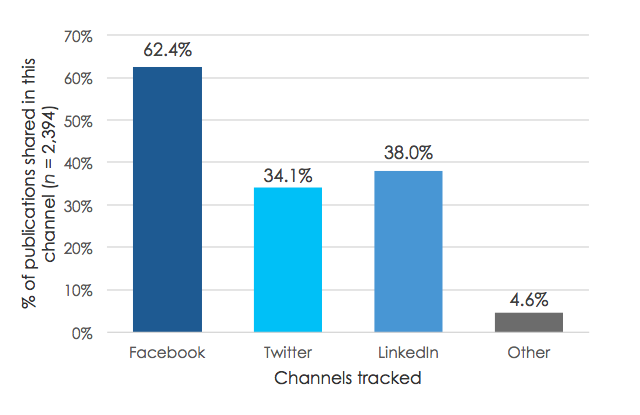 However, when we looked at the likelihood of people clicking on the links shared (figure 2, based on 1,485 shares that had received clicks), we discovered that while Facebook may be the place that people are more likely to share, it is more likely that links shared via LinkedIn will be clicked on. This fits more with the expectation that LinkedIn is a more professional channel where one is connected to people who might be interested in one’s work – our next step is to undertake some qualitative research to explore further why people are more likely to click on links in some channels than others.

Figure 2. Links shared via LinkedIn are more likely to be clicked on 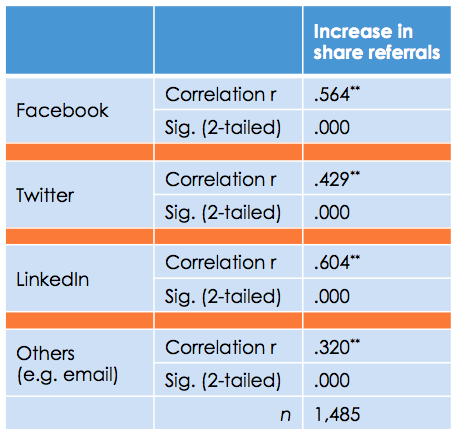 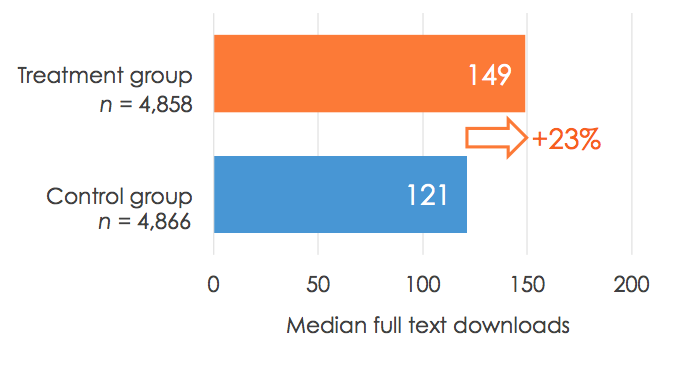 This is exciting in a number of ways. It is the start of evidence that will help researchers have the confidence to share their work more actively. Many researchers feel that their supervisors frown upon efforts to communicate, particularly via social media. Our ability to correlate those activities with the more meaningful metric of full text downloads can help justify time spent on such endeavours. Downloads do not, by themselves, represent impact. But they are the best proxy we currently have for readership, which in turn is the foundation upon which impact – of the academic kind, or more broadly – is built. Efforts to increase readership should therefore not be undervalued, and we are looking forward to the next stages of our research which will enable us to provide more detailed insight into which communications activities and channels are most effective for particular subject, geographic or career-level based groups.

Some additional insights from this project, including breakdowns of researcher behaviour by subject area and career level, are reported on the Kudos blog.

Charlie Rapple (@charlierapple) is co-founder of Kudos (www.growkudos.com), which helps researchers, publishers and institutions to maximize the reach and impact of their research. She is also Honorary Secretary of UKSG, Associate Editor of Learned Publishing, and a blogger in The Scholarly Kitchen. Past roles include Associate Director of TBI Communications, where she provided marketing consultancy to scholarly publishers, societies and institutions, and various roles at the online publishing companies CatchWord and Ingenta.