Do you speak emoji? Emojis, have become an ubiquitous feature of online communication. However, their use by academics is, as yet, limited. In this cross-post Alice Fleerackers discusses Stefanie Haustein’s research at the ScholCommLab, which uses Altmetric data to explore how academics speak the language of emoji.

“Should there be an emoji for everything?” asked journalist Sophie Haigney in a recent New Yorker article. “What, exactly, do we want from our emojis?”

The future of the emoji may be uncertain, but one thing is abundantly clear. Emojis are booming. From classic smiley faces to dancing “party parrots,” there are now almost 3,000 options to choose from. They fill our text messages, our Slack chats, our emails—even some of our books. In 2015 the “tears of joy” emoji was declared Word of the Year by Oxford Dictionaries.

But despite the digital dominance of emojis, they haven’t infiltrated every aspect of daily life. Recent research by ScholCommLab co-director Stefanie Haustein reveals that, when it comes to scholarly communication, emojis mostly get a 👎.

Stefanie first decided to investigate emojis as part of a larger research project exploring how academic work is shared on Twitter. The goal was to understand what kinds of scientific documents are tweeted most, as well as when, how, and by whom. She hoped the emoji data would offer a more nuanced view of the academic Twittersphere.

“The idea was to capture another level of meaning and emotion in the tweets,” she explains. “Emojis are a unique form of visual communication—they have the potential to add to what’s shared through standard means, like words and hashtags, especially in short messages like tweets.”

Using data from Altmetric, she analyzed more than 40 million tweets mentioning scientific journal articles, preprints, conference proceedings, and other documents. Then, she analyzed each tweet for emojis, noting both the type and number used. Here’s what she found:

Less than 1% of scholarly tweets use emojis

Although 10-15% of academics use Twitter, only a small proportion rely on emojis. Of the 42.5 million tweets Stefanie analyzed, only 286,087—0.7%—contained at least one emoji.

These results are surprising, given how popular emojis are beyond the academic sphere. Researchers estimate that more than 90% of people have used emojis in some form of digital communication. On Twitter, almost 1 in 5 tweets contain at least one.

Emojis aren’t just popular; they’re also powerful. Digital marketing research has found that tweets with emojis are more than 25% more engaging than those without. Using emojis in social media can boost click-through-rates, likes, shares, and more.

“I was really taken aback by how few tweets linking to academic papers contained emojis,” Stefanie says, “It made me wonder whether academics are missing out.”

The tweets that did contain emojis followed very distinct patterns. Among the 50 most tweeted emojis, most fell into one of the following six categories:

26 of the 100 most used emojis were face-based emojis. These tweets expressed a range of emotions, likely to show the users’ personal opinion about the document they were sharing.

17% of the 100 most used emojis suggested a positive judgment of some sort, usually of the scientific document being discussed.

13 out of 100 most tweeted emojis included scientific imagery, like satellites or microscopes. These emojis were often content-specific—as when rockets appeared in tweets about astrophysics research. Other times, they played a more general role, simply highlighting the scientific nature of the tweet.

8 out of 100 emojis were signs, which seemed intended to grab attention.

Gestures, like pointing fingers or arrows, featured in 6% of the 100 most-tweeted emojis. Many of these pointed to a link for the scientific document being mentioned.

Reading emojis, like books and documents, seemed to play a similar role as the pointing emojis. They appeared 6 out of 100 times.

Many of the top scholarly emojis overlap with those that are popular in general. But some, like the emojis in the reading and technology categories, seem to be particular to academia.

In addition to these general trends, Stefanie also identified distinct patterns of emoji use between countries. That is, when sharing research findings on Twitter, users from Brazil or Germany favoured different emojis than those from Japan or Canada, for example.

Here are the top 10 emojis used by Brazil, Canada, Germany, the UK, Japan, and the US: 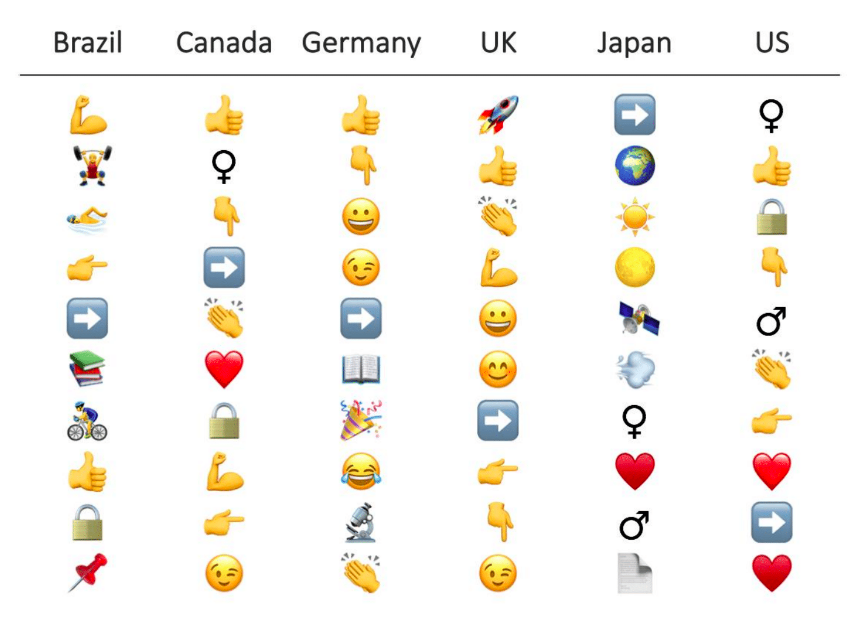 Although it’s not possible to draw firm conclusions about these differences, these results do raise interesting questions. For example, does the popularity of the lock emoji (🔒) in Brazil, Canada, and the US suggest that conversations about paywalls and Open Access are front-of-mind for these countries? Are questions about gender issues (♀️ and ♂️) more common in nations like Japan, Canada, and the US than in others?

Exploring these questions is a task for future research. But, for now, these findings offer a more nuanced understanding of emoji-based communication in the scholarly sphere.

“It was fascinating to see how each country used emojis differently,” Stefanie says. “No two were the same.”

Emojis may be a ‘universal language’, but it seems to be spoken with a wide range of accents, dialects, and expressions.

This post originally appeared on the ScholCommLab Blog. To find out more about the project, check out Stefanie Haustein’s book chapter on Scholarly Twitter Metrics, available as a preprint at arXiv.org.

Alice Fleerackers is a freelance writer, a researcher and lab manager at the ScholCommLab, and an editor at Art the Science. With degrees in both psychology and publishing, she is fascinated by the confluence of science and story, and is passionate about bringing research into everyday life. She can be found on Twitter at @FleerackersA 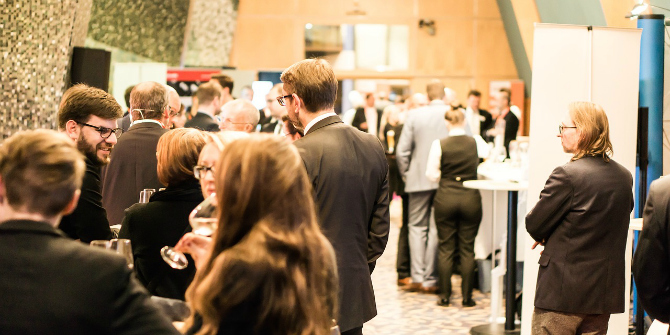 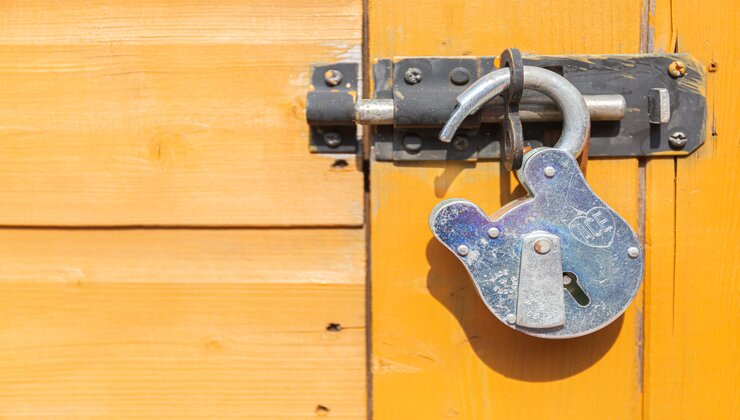 COVID-19 has profoundly changed the way we conduct and share research. Let’s not return to business as usual when the pandemic is over!