The theme of this year’s Open Access Week is “Open for Whom? Equity in Open Knowledge”. Open Access and the opportunity it presents to enhance the dissemination and understanding of social science and indeed all knowledge, has been, and is, a consistent focus of the LSE Impact Blog. In this post I have brought together a number of recent blogposts on Open Access that have featured on the Impact Blog, highlighting some of the current debates and developments in a project that has now been in motion for almost two decades.

As the organisers of Open Access Week describe, the debate around open access has transitioned from one about the viability of the concept of open access, to one of creating an equitable research culture, where openness is a default. As Daniel Hook argued in a post directly related to this question: The Open Tide – How openness in research and communication is becoming the default setting, whilst an open culture is emerging, it remains unevenly distributed and dependent on different national research systems, supporting research cultures with varying degrees of openness. As the post suggests, the ways in which governments fund and maintain open infrastructures are therefore critical to delivering not only openness, but also equity.

For this reason, although 2019 has seen many important developments for open access, the most significant event for open access in 2019 likely occurred in 2018, when cOAlition S unveiled Plan_S, the ambitious funder led mandate to initiate a global transition to open forms of research publication. Whilst, this initiative has had significant implications for academic publishers, as described by Martin Szomszor in his post Making Waves – Assessing the potential impacts of Plan S on the scholarly communications ecosystem. It has also raised more existential questions about the purpose of open access and Plan_S. In particular, as Jon Tennant argues in Plan S – Time to decide what we stand for, it asks whether the open future we would like to see is one that maintains the status quo of commercial academic publishing, or one that promotes a scholarly communication system run by and focused on the needs of the academic community.

Plan_S has arguably done much to re-open many of the debates surrounding open access and to accelerate a transition to widespread open access, especially within Europe. However, the potential it creates to lock in publisher profits, either through escalating APCs (Article Processing Charges), or national level publishing deals has received criticism. As Shaun Khoo noted in his post The gold rush: Why open access will boost publisher profits, the insensitivity of prices for open access publishing could lead to higher costs to research funders and library budgets, potentially limiting access to publication outlets to researchers with fewer funds, or who work independently.

These concerns have been prominent in countries with smaller research budgets, as was highlighted in Richard Poynder’s post: Plan S and the Global South – What do countries in the Global South stand to gain from signing up to Europe’s open access strategy? The impact that a global open access strategy might have on already existing open research ecosystems operating in the Global South was also raised by Eduardo Aguado-López and Arianna Becerril-Garcia in their post AmeliCA before Plan S – The Latin American Initiative to develop a cooperative, non-commercial, academic led, system of scholarly communication. Ultimately, changes to publication outlets and the prestige associated with them will have significant impacts on international research collaboration. Finding a solution that can unite the global research community, as opposed to splintering it into competing fragments, will be a significant challenge to creating a truly equitable open research system. 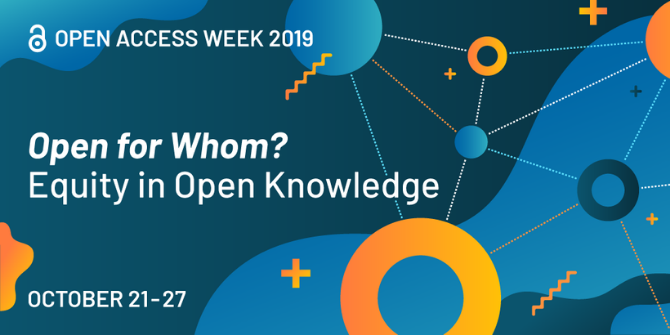 Alongside developments in funding models, there has also been a sustained interest in the technology of open publication, with funder publishing platforms emerging as an important mechanism to host an expanding corpus of open research. Pioneering examples such as Wellcome Open Research, as Robert Kiley and Michael Markie explain: Wellcome Open Research, the future of scholarly communication?, have shown how these platforms can both work at scale and drive innovation in scholarly communication. Funder led publishing platforms are also likely to become increasingly mainstream, as they are aligned with the European Commission’s Horizon 2020 and Horizon Europe funding schemes, as described by Bianca Kramer: Fitting the mould – What the European Commission’s second tender for an Open Research Publishing Platform tells us about the future of scholarly communication.

Publication outlets and platforms are focal points for academic communities of practice and play an important role in shaping them. As Lucy Montgomery and Cameron Neylon make clear in their post,The value of a journal is the community it creates, not the papers it publishes, “journals should be seen as a technology of social production and not as communication technology”. Taking this point further they argue that thus far large-scale publications – megajournals such as PLOS ONE – have struggled to sustain vibrant research communities. Similarly, as Jenny Fry and Simon Wakeling found in their research into academic attitudes towards megajournals: Who are you writing for? The role of community membership on authors’ decisions to publish in open access mega-journals, academic interests are often only partially aligned with megajournals, particularly when it comes to influencing disciplinary peer groups.

Further, making an open transition has also proved difficult for existing scholarly societies, which frequently depend on revenues from publishing subscriptions to support their academic communities. This challenge was highlighted in Lisa Matthias, Najko Jahn and Mikael Laakso’s post; Open and closed – What do reverse flips tell us about the scholarly publishing landscape?, which showed a significant proportion of OA journals that had reverted to a subscription model were originally launched by learned societies. However, findings from the SPA-OPS project to assess viable open transition pathways for learned societies; Learned Societies, the key to realising an open access future?, shared by Alicia Wise and Lorraine Estelle, suggest that despite there being significant risks for societies, opportunities for change do exist. The question of what an open research community might look like therefore remains open and any solution will likely have to carefully balance the needs of the technology of publication, with the specific needs of academic communities.

Perhaps the least recognised members of any open research community are the end users of open research. Although as readers of the Impact Blog will know, assessing the impact of academic research is a profoundly complex, there remains much work to be done in understanding how open research finds its way into society. As Michael Fell argues; Significant economic benefits? Enhancing the impact of open science for knowledge users, open research can produce economic benefits, but to be used effectively open research requires significant efforts to bridge gaps between research and knowledge users. A similar need to expand efforts to reach end users is also apparent in the use of open research for higher education. As, research by Elizabeth Gadd, Jane Secker and Chris Morrison;  Open access to teaching material – how far have we come?, found that in the UK, despite an increasing proportion of research being made open, only a limited amount of open research was correctly licensed for use in university teaching. Together these posts suggest that focusing on a wider conception of the open research community that includes knowledge users, is essential to delivering both useful and equitable outcomes.

Finally, the way in which open research is used within the academic community for review and assessment is also vital to recognising and developing an equitable open research community. As Sascha Friesike, Benedikt Fecher and Gert. G. Wagner outline; Now is the time to update our understanding of scientific impact in light of open scholarship, open scholarship presents a new paradigm for understanding research impact that is largely overlooked by traditional research metrics. But, as research from the Scholarly Communications Lab suggest, Academic review promotion and tenure documents promote a view of open access that is at odds with the wider academic community, at least in North America, much research assessment remains locked into traditional ways of assessing academic research. Encouraging greater institutional recognition for a broader range of open research outputs will be essential to developing a research community that prioritises research that is engaged and open.

Ultimately, achieving equity in open knowledge and research requires sustained work across a range of dimensions, from the macro scale of achieving an open research system that recognises and nurtures a diverse range of international voices, to the micro scale of developing forms of open publication that truly work for the needs of different research traditions and those eager to learn from them. This post can only scratch the surface of a range of these issues, but it makes clear, as Open Access Week 2019 does more broadly, that open access is an ongoing project and despite open access now being a reality for some, we all need to continue working to make it equitable for all.

The LSE Impact Blog has published many posts on open access, to see them all follow the link here.

Michael Taster is the managing editor of the LSE Impact Blog.