In addition to thesis writing, PhD candidates in SHAPE subjects are expected to be able to communicate their research to diverse audiences and also be prepared for careers outside of Higher Education. Should PhD supervision cover these areas, or does impact training sit more naturally elsewhere in the university ecosystem? In this post, Katherine Parker-Hay, outlines the perspectives of practicing supervisors. Based on interview data, she argues that supervisor training should address widespread ambivalence about the “corporate language” which often gets associated with Impact.

It is unlikely that anyone could emerge from a PhD nowadays under the illusion that academia beckons a life of pure research. But should supervision, traditionally a training for academic careers, be preparing emerging scholars not only to conduct research but also communicate it to diverse audiences? Or should such training be happening elsewhere within the university ecosystem?

This is a question with a concrete answer. Consulting supervisor policies of ten institutions, selected for geographical and institutional variation, I found that the supervisor’s role is to discuss and signpost PhD professional development activities but not actually provide that training. In other words, supervisors must have the conversation.

This guidance seems simple enough, but are these conversations actually happening and, if not, then what are the barriers from the supervisor’s perspective? Drawing on data from interviews and focus groups, I authored a report with Vitae which looked at how doctoral supervisors in the arts, humanities and social sciences have experienced changes to the doctorate and where they see the boundaries of their responsibilities. The report worked from the guiding assumption that supervisors are experts in their own experience. 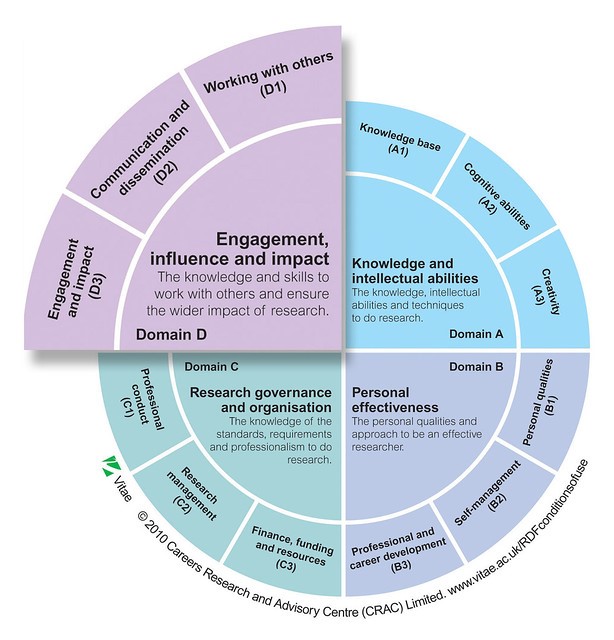 Of ten institutions examined in preparation for these interviews, seven integrate something called the Researcher Development Framework (RDF) into their supervision policies. The RDF, developed by Vitae, is a tool which aims to aid reflective student/supervisor conversation about skills gaps, arming researchers with a more universal language for expressing their attributes and communicating their research. The framework splits up common attributes of academics into four segments: Knowledge and Intellectual Abilities, Engagement, Influence and Impact, Research Governance and Organisation, and Personal Effectiveness. According to policy, the supervisor is to use the tool to help PhD researchers pinpoint gaps in their skillset. Supervisors can then point them in the direction of suitable training, for example, a workshop in how to communicate their research using social media.

The idea that PhD researchers need to extend their skills beyond thesis writing can be traced back to the landmark 2003 Roberts Report, which successfully argued for the introduction of transferrable skills provision to universities and advised that PGRs engage in at least two weeks of professional development a year. The report supposes intrinsic motivation for this training, stating that: ‘good supervisors play a role in helping students identify suitable training, and in encouraging them to make the most of such opportunities’. But how do supervisors actually feel about holding these conversations? Does Roberts’ estimation of intrinsic motivation prove accurate?

Should supervision, traditionally a training for academic careers, be preparing emerging scholars not only to conduct research but also communicate it to diverse audiences?

Despite its integration into official policy, few of the supervisors I spoke with had more than a passing familiarity with the RDF. The interviews therefore allowed for a discussion of and proper look at the tool, which inadvertently provided the necessary space for supervisors to develop some relationship with it, whether that be positive, or negative; more than half of the participants asked to keep a copy. This suggests that, without a level of familiarity, it is unlikely that it will occur to supervisors to use it.

Having taken time to think about the tool, supervisors’ opinions on whether they would actually use it were divided. Some thought it potentially useful because it set out what they already try to cover with their students in a more intuitive way. This group anticipated that the tool would prevent them from missing something. Others found the RDF alienating because it was not framed in the language of their discipline. As a supervisor in History noted, ‘we are not a big corporation where people come in for management appraisal’. Another tried to pinpoint her reason for not using it, despite being aware of its existence, explaining that she felt it sat more naturally at the doctoral school level: ‘when you meet your student there is so many exciting things to talk about’, she reasoned, ‘there is enough of this when you get a job’. Significantly, the fact that the tool was not framed in specific disciplinary language was the reason it was thought inappropriate to the supervision setting.

I don’t think that this reaction is entirely surprising, especially considering the history of expectations surrounding supervision. Though the supervisor’s role has traditionally been to guide thesis writing, it has also implicitly been to socialise the apprentice researcher in the behavioural intricacies of a sub-discipline. For example, Eva Bendix Petersen has argued that ‘postgraduate supervision entails a relationship in which the boundaries around what constitutes culturally intelligible academic performativity […] are negotiated, maintained, challenged and reconstructed’. Analysing written feedback, Bendix Petersen traces moments when disciplinary norms are breached, and the supervisor corrects and subtly pulls the novice researcher back into line. Perhaps not surprisingly, supervisors interpreted the universalism of the tool to be its key drawback; an invasion of corporate jargon into the space of supervision. Ironically, participants saw this as a barrier rather than recognising it as an advantage of the RDF, which was designed to enable PGRs to understand their skills as a researcher in a universal rather than disciplinary language.

Though the supervisor’s role has traditionally been to guide thesis writing, it has also implicitly been to socialise the apprentice researcher in the behavioural intricacies of a sub-discipline.

Whether or not this presents an insurmountable barrier when it comes to having these conversations in supervision remains open to question. Ultimately, however, if it does remain part of the supervisor’s official responsibility to use the RDF then a cogent case needs to be made for its usefulness, taking into account the complex position that the supervisor holds with regards to disciplinary and universalising language. Training should inform supervisors of the context and rationale of the tools which they are asked to use as part of their practice, encouraging them to make their own judgements. Arts and Humanities/Social Science researchers are trained to ask questions about the values and ideologies underpinning apparently neutral frameworks; imposing such frameworks from above, without consideration of this complexity, seems likely to backfire.

Arguably, there is a case to be made that the very fact the RDF feels jarring to academic norms makes it worth engaging. PhD graduates are by definition ensconced in a disciplinary language, and can overestimate how well this translates into non-academic domains. However, the economic landscape is such that aspiring academics are increasingly negotiating the possibility of careers beyond academia. The problem is that supervisors are currently responsible for holding conversations about impact and professional development, but are often just as alienated by non-disciplinary language as are their students. There is currently much talk about what supervisory training should look like and how it should reflect the changing landscape of doctoral education. Based on this interview data, training should not necessarily reinvent the wheel but give supervisors the space to develop a relationship with the wheels they are already supposed to be using.

This post is based on the author’s report for Vitae: ‘The supervisor’s voice: perspectives on the values and boundaries of the supervisory role’

Katherine Parker-Hay teaches at University of Sussex and specialises in gender, sexuality and affect. She has worked with the NHS to develop creative writing workshops for people experiencing anxiety and depression and with Vitae on a report which looks into the dynamics of supervisory relationships.