Imagine yourself working more than 15 hours a day without a break, not a moment’s respite, and where you are not entitled to a day off or any leisure time; or just imagine yourself working in an environment where your employer confiscates your identity and privacy. Take a moment and just think you’re working in a place where you are randomly subjected to sexual harassment, where you are constantly beaten up and prevented from joining labor unions. Surely you don’t want to end up in such poor and inhumane work conditions, but unfortunately millions of Domestic Workers coming from different parts of the world – Ethiopia, Philippines, Bangladesh, Sri-Lanka, Tanzania, Kenya, etc. – hoping for better future end up in such horrific undignified working conditions.

Millions of women and girls around the world are employed as domestic workers in private households. They clean, cook, take care of children and elderly, and perform other caring tasks as assigned by their employers. Despite their crucial role, Migrant Domestic Workers (MDWs) and particularly women are being exploited everywhere in the world, in many countries of the Middle East, and especially Lebanon.

Lebanon is a country that steals the spotlight when it comes to mistreating women Migrant Domestic Workers (WMDWs) coming from different African and Asian countries. Human Rights Watch and other watchdog organizations documented thousands of human rights violations against WMDWs by their employers – they often work for long hours with no breaks; they are not entitled to the average wages; they are often exposed to sexual and verbal abuse, often stripped from their traditions (food, clothes and hair care) and most importantly they are not protected under the Lebanese labor code.

Lebanon’s 250,000 migrant domestic workers fall under the abusive “Kafala” or Sponsorship system that is the leading cause of the violence against MDWs; this may be true for many other Arab receiving countries.

Many reports have argued that Lebanese “Madams” reflect their own abusive experiences and frustrations  on the vulnerable WMDWs. Yet, it is quite problematic to assert that the violations of these workers’ basic rights are inherently embedded in this employee-employer relationship. Indeed, this might lead to the violations being privatized and delegated to the household, ignoring the responsibility of the state in incentivizing violence against WMDWs’ and increasing their vulnerabilities. By focusing on this abusive type of relationships, we are ignoring the root cause of the problem – the Kafala System – and how it is incentivizing violence against WMDWs’ and further creating a new category of “exploitable, cheap, flexible and vulnerable workers”. 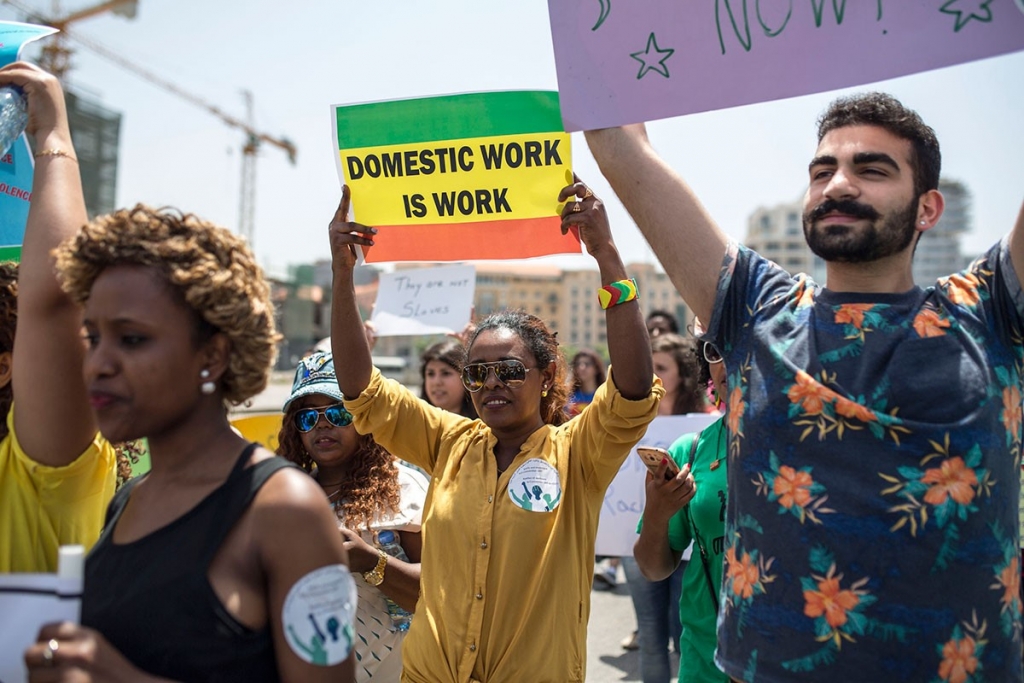 The Lebanese Labor Code and the abusive – Kafala system

The current Lebanese Labor code was written in 1946. Since then, several bills have been added, but the code itself remains outdated. Domestic work generally is not acknowledged in the labor code whether the worker is Lebanese or non-Lebanese. Thus, the labor code does not cover the MDWs nor recognize their work to be “Labor”. As a consequence, they are banned from: forming unions; being covered by social security and health insurance; and having legal protection. Instead, the only legal framework to cover MDWs and supposedly protect them is the “Kafala” or the sponsorship system enforced by the Lebanese General Security.

The “Kafala” system is an employment system that requires sponsorship from a local citizen for a foreign worker to be residing and working in the country. The sponsor has control over the worker as he/she cannot leave the job, exit the country or change jobs without their sponsor’s permission.  Unfortunately, this employment system is common across the Middle East countries. In Lebanon, three parties are engaged in this system; the General Security, the recruitment agency and the employer. The contract is usually written by the recruitment agency in Arabic with the employer’s approval and accommodating to the General Security standards. Upon arrival, the MDW’s passport is confiscated by her employer and she is forced to sign a contract in a language that she does not understand.

Many NGOs are working to protect WMDWs’ rights in Lebanon in the absence of any governmental efforts to do so, yet, they are being challenged. For instance, “This is Lebanon” is a local NGO that is run by WMDWs to document the violence, abuse and inhumane work conditions that they are experiencing on a daily basis. Two months ago, the Lebanese government blocked their Facebook page and closed their website banning them from talking about the inhuman abuses they are facing under national laws. In the absence of legal protection and governmental acknowledgment in Lebanon, these women are struggling to document their experiences, mobilize and raise their voice against the ignorant system.

The time has come to acknowledge domestic work as ‘real work’, worthy of equal labor rights. Abolishing the Kafala system and reforming the current outdated Lebanese labor code, to extend labor protections to migrant domestic workers is an urgent need in the present time. The Lebanese Labor code should equalize between ‘domestic workers’ and ‘workers’ that enjoy labor protections such as a minimum wage, fair pay, overtime pay and compensation for dismissal. Along with extending labor protections in national laws to domestic labor, there is a need to abolish the visa sponsorship system, and sanctions must be imposed on employers who confiscate workers’ passports, phones, personal and other travel documents.

Further, the government of Lebanon should not only acknowledge the precarious conditions of migrant domestic workers and particularly women, but also work to facilitate their access to legal resources and encourage them to report employers’ abuse without facing deportation.

For the legal reforms to succeed and be translated into substantial social change, there is a need to humanize first and foremost employee-employer relationship, here echoing to the stereotypical relationship between the ‘Madam’ and ‘Maid’. We ultimately need to eradicate the stigma behind the domestic work and what it means to be a ‘maid’.

Youmna Cham completed her MSc, in International Development and Humanitarian Emergencies from LSE, in 2018. She currently works as a Gender Economic Researcher at the American University of Beirut (AUB) as part of the KIP Index Project on Gender and Sexuality.

May Ghanem is a research associate at the KIP project on Gender and Sexuality. She is currently coordinating several gender-related research projects with focus on sexual harassment in the workplace and diversity in the Lebanese labor law. She previously worked with NGOs on prisons reform policies in Lebanon. She holds a MSc in Criminology from London Metropolitan University with emphasis on gender-based violence.

Abir El Danaf previously worked as a Researcher at the UN ESCWA Center for Women (ECW) in Beirut. She currently works as a Gender Economic researcher at the KIP Index Project on Gender and Sexuality. She holds an MA in Interdisciplinary Gender Studies from the Lebanese American University (LAU).