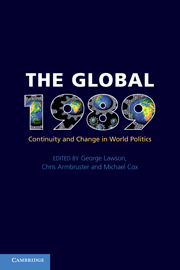 LSE IR Department members Dr George Lawson and Professor Michael Cox are amongst the editors of this new volume, The Global 1989: Continuity and Change in World Politics, published by Cambridge University Press.

1989 signifies the collapse of Soviet communism and the end of the Cold War, a moment generally recognized as a triumph for liberal democracy and when capitalism became global. The Global 1989 challenges these ideas. An international group of prominent scholars investigate the mixed, paradoxical and even contradictory outcomes engendered by these events, unravelling the intricacies of this important moment in world history. Although the political, economic and cultural orders generated have, for the most part, been an improvement on what was in place before, this has not always been clear cut: 1989 has many meanings, many effects and multiple trajectories. This volume leads the way in defining how 1989 can be assessed both in terms of its world historical impact and in terms of its contribution to the shape of contemporary world politics.

• Reassesses the place of ‘1989’ both in terms of world history and contemporary world politics • Addresses issues ranging from the development of international financial instruments and military techniques to how 1989 changed important areas in world politics such as Russia, China and the Middle East • Will raise understanding of the impact of 1989 beyond Europe so it can be understood not just as a regional issue, but in global terms

Editorship of The Review of International Studies comes to LSE