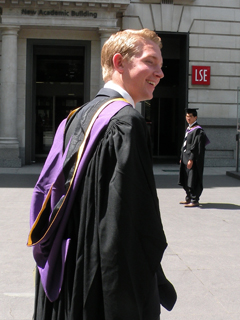 Warwick Brennand on his graduation from LSE

BSc IR student Warwick Brennand has just graduated from LSE, after winning School or Departmental Prizes in each of his three years of study.

Warwick says of his time in the International Relations Department: “I thoroughly enjoyed studying International Relations at LSE. In particular, I found that the first year of the IR course at LSE provides you with exactly the building blocks you need in order to focus on the areas that interest you the most in the latter part of the course. I am very grateful to all of the lecturers and teaching staff who made it such an interesting and challenging three years”.

Warwick will be starting Law School in London in October 2012 and we wish him well with his future career.

This entry was posted in departmental news and tagged student news. Bookmark the permalink.