Dr Aaron McKeil, Course Tutor, LSE Executive MSc International Strategy and Diplomacy, shares his insights into the use and practice of Twitter in international diplomacy and the benefits of the simulation for teaching and learning.

In the early Lent Term, 2020, we delivered a Twitter Diplomacy Simulation through a closed online platform in which students were able to compose and post tweets leading up to an in-class diplomatic negotiations exercise. Conducting this simulation provided insights into the pedagogy of diplomacy simulations and may also prove useful as a teaching tool in and beyond the LSE IR Department.

We developed and delivered this simulation on the Executive MSc in International Diplomacy and Strategy programme at the LSE. This is a one-year degree designed to enhance the strategic vision and negotiation skills of professionals working in an international environment. This project has been generously supported by a LSE LTI Spark! grant and also aims to support the LSE simulations special interest group (LSE SIM-SIG), a practice exchange group for colleagues using simulations in the classroom.

In recent years, the role of Twitter in international diplomacy has gained increasing interest in the literature of diplomacy studies, not only for its notable disruptive uses, but also for its potential to contribute to successful diplomatic breakthroughs when diplomats use tweets to signal their negotiation intentions in advance.[1] In the teaching and learning of International Relations it is also increasingly noted that in-class games and simulations need to take greater account of the role of a digital environment.[2] As such, in developing a Twitter Diplomacy Simulation, we hoped to expand and deepen student learning about the role and practice of social media in diplomacy, particularly in regards to diplomatic negotiations.

We designed this simulation as an additional layer on top of a multilateral World Trade Organization negotiation simulation. Representing five different trade delegations, students were provided with a closed system in which to post their own tweets to signal their intentions leading up to their negotiations. Using Loomio, students were provided separate forums to discuss and draft the contents of their tweets, before posting in a shared main Twitter thread forum. They were introduced to the simulation on Monday and had several days to exchange tweets leading up to their negotiations on Friday. Darren Moon, Senior Learning Technologist at the LSE Eden Centre, was instrumental in facilitating the closed Loomio system and providing students with introductory guidance to it. The results of conducting this exercise were fascinating and admittedly quite fun. They also provide several insights into the pedagogy of these types of simulations.

Many of the students on the Executive MSc International Strategy and Diplomacy programme are career diplomats. As such, many of the simulated tweets reflected the training and professionalism of the students. Vital to conducting this simulation, however, is the prior provision of key readings and their in-class discussion, in order to clarify the aims and process of conducting the simulation. 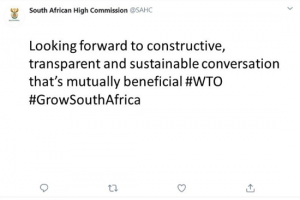 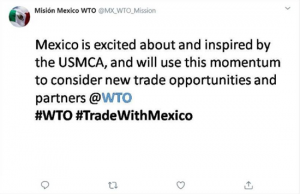 Conducting this simulation in a closed online environment had the downside of limiting the sense of a digital public sphere in which contemporary diplomacy operates.[3] From conducting this simulation, it became evident that teachers can attempt simulate the sense of a public digital context by preparing interventions in advance and by simulating public actors to interact with student tweets. During the simulation, the teaching team was also able to input their own disruption tweets to the main twitter thread in order to increase the challenge of achieving successful negotiations.

The feedback received from students on this Twitter Diplomacy Simulation pilot project indicated that positive contributions to the trade negotiations were made by signalling negotiation intentions in advance through student tweets. This positive negotiating momentum leading up to the negotiations was particularly important because we designed the trade interests of the countries in the WTO negotiations to be at loggerheads, making the achievement of a trade agreement a challenging prospect for students.

In delivering this simulation, we also extended the use of the Twitter tool to continue during the negotiations. Students continued to make us of it, tweeting major breakthroughs, between the China and US teams for instance, as well as tweeting their shifting and hardening negotiation positions. In feedback, several students noted the continued use of tweets was a distraction from the main task of negotiating a trade deal. This reveals that teachers may wish to limit the use of Twitter tools to the pre-negotiation portion of a negotiation exercise. It also reveals the disruptive aspects of Twitter diplomacy.

In addition to providing these insights, this pilot project contributes to developing a new simulation tool for student learning about the use and practice of Twitter in international diplomacy. It can be used an additional layer augmenting the negotiation simulations and activities that teachers may be using in their courses, deepening the digital ‘reality’ of those simulations and facilitating additional learning objectives and outcomes. We are working to develop and deliver this tool for greater accessibility and use for teachers conducting negotiation simulations across the LSE and LSE IR Department.

For LSE colleagues, the LSE SIM-SIG will meet once a term, and there is an online space to share resources and support. If you would like to be added to the online group please email Dr. Jenni Carr: j.carr4@lse.ac.uk.

Announcing a collaborative doctoral award: ‘The Body as a Battlefield’: Material Culture and Narratives of Sexual Violence in Conflict