Uruguay’s 2019 elections: will the left hold on to power?

Uruguay’s 2019 elections: will the left hold on to power?

After nearly fifteen years in power, Frente Amplio faces a serious challenge from Luis Lacalle Pou and his centre-right National Party. But with the election sure to go to a second round, coalition-building with emergent, resurgent, and sometimes unpredictable smaller parties will be crucial, writes Morgan Fairless (LSE).

As its third consecutive term in power draws to a close, with a general election to be held on Sunday 27 October, Uruguay’s left-wing Frente Amplio (Broad Front) is showing clear signs of electoral weakness.

This weakness leaves it vulnerable to the consolidation of an opposition coalition in the virtually inevitable second round that will take place on 24 November. The rapid rise of the conservative Cabildo Abierto (Open Forum) party, founded less than a year ago, will also test the resilience of one of Latin America’s stronger party systems.

Who will win the first round?

Frente Amplio, a cohesive amalgamation of left-wing groups, has been in power since 2005. At the last elections in 2014, the party was able to achieve a legislative majority, but this time around a hotly contested run-off against the centre-right National Party candidate Luis Lacalle Pou is a certainty.

Frente Amplio has been successful in developing a stronger welfare state and implementing a wide-ranging social-rights agenda that has legalised abortion, same-sex marriage, and the marijuana industry.

But in economic terms, there are mounting concerns about fiscal deficits and possible knock-on effects of the ongoing economic crisis in neighbouring Argentina. Mismanagement and corruption scandals relating to the national airline and the state-owned oil refinery have also bred disenchantment amongst moderate voters, with the latter controversy having ultimately led to the resignation of Vice-President Raúl Sendic.

More worryingly for the ruling party, the opposition has capitalised on growing public and media interest in two areas of perceived decline: education and security. Rising murder rates have combined with high-profile cases of femicide and international drug trafficking to leave voters on edge.

This may also favour the passage by referendum of a constitutional amendment that would create a new national guard and give police the right to carry out raids on people’s homes at night (with a warrant). Although the left is mobilising against the referendum, which was proposed by a conservative legislator, recent polling suggests that the constitutional amendment will pass.

The Frente Amplio candidate, Daniel Martínez, has defended the party’s record and doubled down on progressive causes like shorter working hours, greater diversity in employment, increased education spending, and construction of social housing.

The National Party candidate, Luis Lacalle Pou, meanwhile, has focused on criticising the left for their inability to solve security and social problems even after 15 years in power. His manifesto promises “more responsible” spending while effectively retaining social programmes created by Frente Amplio. Lacalle Pou has also promised to liberalise oil imports, currently a state monopoly, and to increase street-level police presence.

Polling suggests that Frente Amplio and the National Party will take about a third and a quarter of the vote respectively, leaving both in need of support from other groups to try to get over the line in the second round. This makes the fight for a distant third place particularly significant.

The historically powerful Colorado Party and the year-old Cabildo Abierto, each polling at around 11 per cent of voting intentions, will thus become key players in efforts to build workable coalitions before the run-off. Though both are parties of the right, Uruguay’s relatively moderate politics mean that many of their voters could swing back to the left in the second round rather than supporting the main centre-right candidate, Lacalle Pou.

That said, Lacalle Pou does have the edge, finding himself on the right side of a 47-42 per cent split in voting intentions when paired with Frente Amplio’s Martinez.

An election for outsiders

Electoral success will be just the first of many stepping stones towards a functioning government, however, as the successful candidate will then need to retain the support of smaller parties within parliament in order make good on campaign promises. June’s primaries shocked many in Uruguay, as outsiders made considerable electoral gains.

Uruguay’s party system is essentially strong, with the National and Colorado parties dominating throughout the twentieth century until the emergence of Frente Amplio after the return to democracy in 1985. But recent years have seen the unexpected rise of Cabildo Abierto and a resurgence for the Colorado Party.

Cabildo Abierto is led by former military chief Guido Manini Ríos, whose anti-immigrant and anti-politics discourse has led some to dub him the Bolsonaro of Uruguay, though in reality he remains far more moderate.

Cabildo Abierto has already become more influential than older small parties like the Independent Party, which in 2014 gained its first seat in the Uruguayan senate. The party took nearly five per cent of the vote in a recent open primary despite having no internal competition, meaning in effect that almost 50,000 people turned out purely to signal their support for Manini.

Within the Colorado Party, meanwhile, academic Ernesto Talvi won the candidacy by beating two-time president and Colorado star Julio Maria Sanguinetti by 53 per cent to 32 per cent. Talvi’s new faction within this centre-right party has leant further to the left, potentially drawing in disgruntled Frente Amplio voters. Talvi has managed to bring Colorado back from the wilderness, with its current vote share of around 10 per cent a significant improvement on its performance in the last three elections.

A legislative coalition with the Colorado Party is almost a certainty for the National Party, but if Cabildo Abierto manage to increase their electoral support in line with recent polling, the traditional centre-right parties would find themselves with an unpredictable and relatively extreme player in their midst.

It remains unclear whether support for this upstart party will endure or if instead it represents a passing distaste for the established elites from the traditional parties. But it seems that the horse-trading and coalition-making between the two rounds could be the beginning of a period of uncertainty and change in Uruguay’s otherwise stable politics. 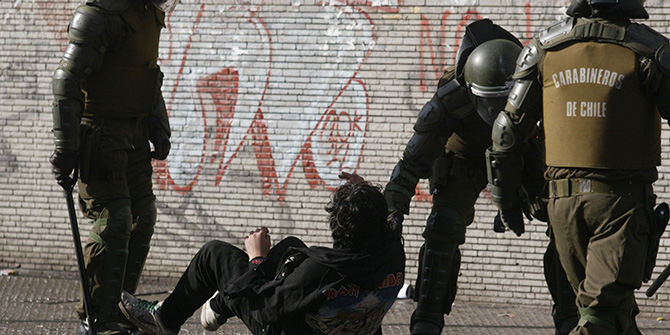