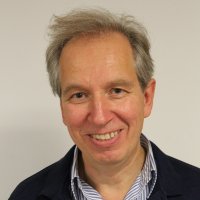 Bernhard von Stengel, a Professor in LSE’s Department of Mathematics, uses his game theory knowledge to look into referendums, and considers how a referendum with more than two choices could be run…

Bernhard teaches discrete mathematics, optimisation and game theory at LSE. He is also on Twitter – @bvonstengel

If you favour a second referendum on Brexit (a prospect that is now, February 2019, receding), you should not only think of what you should ask the people, but how you would reconcile their choices. This is a central question of Mathematical Social Choice, with attempts to answer it since the middle ages (which is discussed in the ‘History’ section later in this post).

The question becomes interesting when there are more than two choices on the ballot paper. Suppose the choices are:

These preferences and their distribution are not unrealistic.

A voting rule now tells us how to distill “the will of the people” from these preferences. But which rule should we choose? There are several contenders for such a rule.

This declares as winner the option that has gotten the most first-choice votes (so one does not even need a second choice and the ballot paper is simpler). In parliamentary elections in the UK, the MP representing a constituency is chosen in this way. Here the most first-choice votes (4 out of 9) are for Remain, but this is not a majority of all votes – 5 out of 9 would rather leave the EU without or with a deal.

This means that the option that gets the least first votes is discarded, and the second preference of the voters who made that choice is counted (as if they would be asked to vote again in a “runoff” vote, assuming that the others stay with their first choice). Here, these are the voters who chose “D” and their votes are split, one of them for “R” and the second for “N”. The total is now 5 for Remain and 4 for No Deal, and Remain is the winner as the declared “will of the people” according to this rule.

The rule seems clear and fair enough, but it has its problems. The main problem is called strategic voting which means that voters have an incentive to mis-state their true preference. Namely, the minority (of people who chose “D”) now have in effect the casting choice between two polarised outcomes. If the above preferences were known (supported by opinion polls, say), then an “N” voter as above would have an incentive to mis-state their preference instead as 1=D 2=N 3=R (that is, swap their first and second choices), to let N become the decisive minority with 2 out of 9, after D which now has 3 out of 9 first choices. The other 2 N voters would both choose D and create the final vote 4 R versus 5 D, meaning to the leave the EU with a deal. While it remains doubtful that voters are that strategic, it would, on the other hand, create an incentive to be a bit more moderate.

However, not all voting rules favour R for the above voter preferences.

This rule looks at the stated order of preferences and compares any two outcomes with each other. That is, the preferences of the voters are now used to answer a question such as “do you prefer D over N”?

Here, 2 thirds of voters prefer R over D, 2 thirds prefer D over N, and 2 thirds prefer N over R. Such voter preferences may not be realistic, but who knows? The fact that they are theoretically unavoidable for any reasonable voting system is known as “Arrows Impossibility Theorem”, after the economist Kenneth Arrow (1921-2017).

The Condorcet method is named after the Marquis de Condorcet (1743-1794), who died in a prison cell, poisoned, during the French Revolution. However, it was already invented in 1299 by the Majorcan polymath Ramon Llull (ca. 1232-1316). To remember that name (which has 4 letters “L” in it and one vowel) think of the binary number 11011. Llull indeed invented the binary system and is considered by some as the inventor of information theory. He was so enthralled by it that he thought St Mary should be added to the Holy Trinity to make their number a power of two. Heretic stuff that did not make him popular with the church authorities. With the discovery in 2001 of his lost manuscripts, Ars notandi, Ars eleccionis, and Alia ars eleccionis, Llull is given credit for discovering the Borda count (re-discovered several times in later centuries) and the Condorcet criterion.

A very accessible book for general readers on these problems is Szpiro’s ‘Numbers Rule: The Vexing Mathematics of Democracy, from Plato to the Present’.

One conclusion is that you probably shouldn’t put more than two options on a ballot paper, or maybe not hold a referendum in the first place. On what voting system should you agree even to determine the “will of the people”, when we have enough trouble to determine it when they made one out of two choices? At any rate, you will appreciate “Strong Arrow’s Theorem” from the geeky cartoon XKCD (one of my favourites): 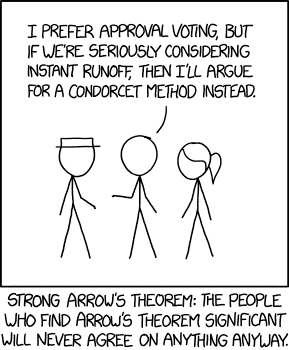 Can we ever agree on anything? Ask the mathematician!

You can watch Bernhard’s public lecture on ‘Game Theory and Politics’ here.