Making government documents available to the public has long been a Western tradition aimed at showing the transparency of governments. For example, starting in 1861 the Department of State has released collections of documents regularly as part of its Foreign Relations of the United States (FRUS) series. These collections have provided scholars with an unprecedented glimpse into the conduct of American foreign policy. On the down side, FRUS volumes do not get published until well after the events have past (they are only now releasing documents from the early-1970s). But what happens when classified documents are leaked to the public not long after the events occurs, as in the case of Wikileaks? While this can be highly dangerous and can have an incredible impact on international relations (just look at the Arab spring), it offers scholars an early glimpse into the conduct of modern diplomacy and war. What makes Wikileaks so impressive is the shear volume of data made available to the public. This is unprecedented. Unlike leaks in the past, which were often based on government investigations and limited in scope, the views contained within reports were those of its authors. Problematically, if the author happened have a strong bias against those who he was investigating, the leaked document can have a distorting effect on how events are later understood. Take, for instance, the Pike Committee Report.

Sparked by Seymour Hersh’s revelation of the Central Intelligence Agency (CIA)’s “Family Jewels”, which outlined all of the illegal activities the Agency had conducted, the House of Representatives established an oversight committee chaired by Representative Otis Pike to investigate the CIA’s covert operations. After months of battling with the Ford administration, Pike pushed to release the report to the public in its entirety. Alarmed that this would reveal highly classified intelligence (and some embarrassing secrets), the Ford administration convinced Congress to block its release. When this happened, the entire report was leaked to the Village Voice in February 1976 and was then published in Britain.

Contained within the report were details of a covert CIA operation in support of Kurdish rebels in northern Iraq, who were fighting for autonomy against the sinister, pro-Communist, Ba’ath regime in Baghdad. The picture the report paints is that of a highly cynical American operation aimed at using the Kurds to destabilize the Ba’athist regime, while at the same time offering little or no regard for their personal safety. While elements of this analysis are correct, indeed destabilizing the pro-Soviet regime in Baghdad was a key objective, the recent declassification of pertinent documents paints a much different picture than the Pike Committee Report suggests.

While the basic facts of the operation are true, on a number of occasions the Pike Committee Report distorted important details in such a way to cast the Kurdish operation in a different light. In one case, a question posed in a NSC memorandum about whether the Shah would not support a declaration of Kurdish autonomy was altered in such a way to suggest that he would not support it. In another example, the report attributed a particularly damning statement to the CIA station chief in Tehran, when in fact the quote was an off-the-cuff observation by the American Ambassador to Lebanon. Finally, the report suggests that Henry Kissinger never responded to a tear-jerking plea for help from the Kurdish rebel leader, when in fact declassified cables show that Kissinger sent a reply that was passed on to the Kurds a few days later. Another cable confirmed its delivery. These are but three examples where facts were distorted purposely to meet the ideological objective of the authors and this is all within a very small portion of the report.

Henry Kissinger does not come off well in the Pike Committee Report. Since the leaking of the report in 1976, scholars have singled out Henry Kissinger for using and abandoning the Kurds in order to advance American interests. At face value, the Kurdish operation fits this mold, but once again documents paint a different picture. On a number of occasions Kissinger went out of his way to help the Kurds. For instance, amid the 1973 Arab-Israeli War, Kissinger stopped his micromanagement of American operations and went out of his way to prevent the Kurds from following Israeli advice to launch an offensive outside of the secure mountain stronghold. Kissinger says as much in his memoire, but the documents available provide a very clear picture of how vehemently he was opposed to the Israeli proposal. A second example, also mentioned by Kissinger in his memoires but described in detail in documents, shows that throughout late-1974 and early-1975 he battled with both the CIA and Department of Defense over a deal with the Israelis to provide the Kurds with weaponry that would help them defend themselves adequately against the Soviet-backed Iraqi military. Eventually Kissinger won the battle, but by this point it was too late, as the Shah of Iran had decided to cut a deal with Saddam Hussein where he would gain territorial concessions from Iraq in exchange for the cutting of his support for the Kurds, all against Kissinger’s advice. Diplomats with Kissinger at the time he found out about the final deal describe that he was deeply upset and angry with the Shah for trading a valuable asset in exchange for minor concessions. He was also tormented by the tragedy that the agreement would unleash on the Kurds. Kissinger’s frustration came out during his testimony before the committee when he lectured Pike that “covert action should not be confused with missionary work”. Difficult as it may seem, the Kurds would not have stood a chance against the Iraqi Army had it not been for the help of Henry Kissinger.

While the leaking of the Pike Committee Report shows that a single document can have distort how people perceive events, leaking of documents to the public en masse, as was the case with Wikileaks, significantly reduces the risk of distortion. As a result, it is looks to be a reliable source of information and presents incredible opportunities for academics, analysts, and students of global affairs to learn more about the conduct of modern diplomacy.

Bryan R. Gibson is a PhD candidate in International History at the London School of Economics and author of Covert Relationship: American Foreign Policy, Intelligence and the Iran-Iraq War, 1980-1988 (Praeger, 2010). 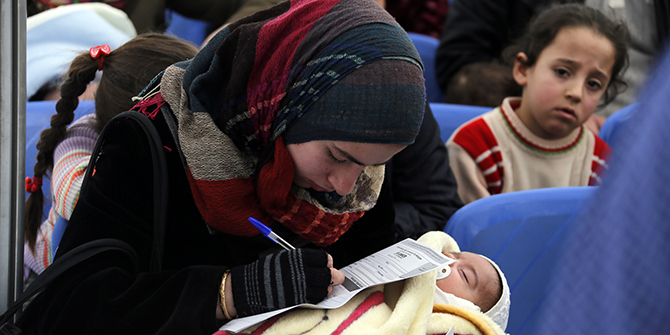 Lebanon is revising its policies towards the Syrian refugee crisis, but are the new measures in its real interest?

Bad Behavior has blocked 1891 access attempts in the last 7 days.