As we attempt to detect some signs of the social transformations taking place in Tunisia particularly after the 2011 uprising, we find the expansion of Salafism and its effects on the process of identity formation among Tunisian youth to be one of the most important social changes. This article examines the Salafist identity formation process among Tunisian youth and its development by tracing the objective and subjective conditions of a young Salafi man. It investigates the repercussions of his personal experience on the construction and re-construction of his personal identity at the cognitive and behavioral levels.

This study consists of an overlap between the role of the group ‘al-Jama’a’ in shaping the self-identity of its adherents – a return to community control, standardisation, and dissolution of individuals and their roles within the group – and the critical formation of these selves as being instrumental and capable of challenging the conventional control of the group through various dynamics.

However, the individual autobiography approach doesn’t lead to generalisation about the form of Salafist subjectivity whether in Tunisia or elsewhere. It helps underscore the diversity of individual trajectories of self-formation within the same society, which depends on different personal experiences, sources of knowledge, and intersubjective relations.

This article illustrates the personal experience of a young Tunisian man who once belonged to Al-Tahrir party and then, at a later stage, to jihadist groups. He went through serious identity crises that led him to reject the Salafist ideology and everything that has to do with Islam in particular, and religion in general, to become an atheist or a man who is not religious as he prefers to call it.

Martin (a name he chose for himself) is a 23 year old single first-year English student at the University of Sfax, Tunisia. Martin comes from a conservative rural family. His father is a fisherman, and his mother a housewife. Martin’s family is devout and financially underprivileged.

I had an ordinary childhood. My family was conservative; I was the most devout of them. I prayed regularly including dawn prayers since the age of seven. I have accepted the reality of my family. Like them, I was a pious Muslim, and did not question their approach to religion. I completely followed their behavior.

In Kerkennah[1] where I spent most of my childhood, my older brother was an active member in Al-Tahrir party. He used to assign me a few simple tasks like delivering the party’s paper to Salafist youth. Al-Tahrir Party is an Islamic extremist party that wishes to apply Islamic law (shari’a) to govern the country. It adopts a radical approach such as killing apostates and stoning adulterers. However, leaving violent acts behind, leaders of the party opted for the use of dialogue and discussions to gain followers.

Martin moved from Kerkennah to Sfax at the age of eighteen to complete his college education. This transition constituted a qualitative shift in his life. Martin says:

When I moved to Sfax, I got the opportunity to meet with a number of leaders of Al-Tahrir party. During the year and a half I spent with Al-Tahrir in Sfax, I expanded my activities within the party, carefully following the training seminars organised by the leaders as well as attending debates the party youth held in coffee shops or at someone’s home. I often questioned what I heard in these discussion circles, not wanting to accept everything naively. I was also distributing pamphlets in front of mosques, which introduce the party, motivate citizens to perform their religious duties, and urge them to choose Islamic Law (shari’a) as the supreme source of legislation.

We were convinced by the party that everyone is against our leaders because they were defending Islam. We were mobilised to attack any secular or western ideas which symbolised major enemies and threats to Islam. We, as a matter of fact, indoctrinated a dangerous conspiracy theory. I personally believed that the establishment of the Caliphate would lead to justice, equality, and a morally righteous society; a strong state which is not controlled by the West. I was ready to sacrifice everything to reach this goal, even to die for it. Of course, in return, I was promised paradise.

With a sneer, Martin said his last sentence. When I asked him about his attitude, he answered:

As I was a staunch believer in the idea of a Caliphate, I kept searching for intellectual and ideological grounding for the party’s arguments. Then I began to notice several contradictions of rational and ideological underpinning opposing to the texts of Quran or Hadith.

I voiced my concerns about the contradictory and limited interpretation of the texts to some party leaders in an attempt to find answers that could convince me, but they kept perpetuating shallow and illogical justifications. It is then, a year and a half after settling down in Sfax, that I started losing interest in the party’s vision and project and retreated from the party.

During that period of doubt, I met a few young members who belong to Salafi jihadism in the mosque, who insisted on applying the Islamic law in appearance as well as in practice. For example, I grew my beard after I joined Salafi Jihadism so that my intellectual affiliation became harmonious with my everyday practices. Yet, I was still uncomfortable because my appearance did not match with my life style as a modern young adult. This change was not easy and smooth at all.

Initially, I found that the Salafi Jihadist group gave more freedom to young people than Al-Tahrir party. Indeed, young Salafi jihadists can be critical of their leaders and oppose their decisions. Furthermore, the young Salafi Jihadists were more committed to the establishment of the Caliphate.

I was seriously committed to the group. I even worked on recruiting new young members. My activity at the university created serious conflicts with leftist and nationalist students, but having the recognition and support of party leaders, I was ready to sacrifice everything for the sake of the group. I wasted a lot of time at the expense of my studies. I was even ready to drop out of school for the sake of jihad.

‘I seriously thought about going to Syria for Jihad’, says Martin with bitterness.

Fortunately, before making my final decision I carried on more research, comparing the Quran and sunnah texts to the practice of Jihadist groups. I came to the conclusion that both groups I had aligned myself with try to justify inconsistencies of the texts with illogical arguments. As my doubts and suspicions grew, my inner conflict aggravated. Thus, I withdrew from the group and spent almost a year looking for ‘the truth’. During that time I called into question the Salafi doctrine itself. I discovered that Al-Tahrir party and Salafi Jihadists are two faces of the same coin in the sense that they hold the same cognitive structures of religious texts. They differ only in their approach.

Submitting religious texts to reason and logic helped me understand the discrepancy between reality and the discourse utilised by both Al-Tahrir party and Salafi Jihadists. From that moment on, I started doubting religion itself.

Doubts about religion and the formation of a new identity (Martin, the Atheist)

As I mentioned earlier, my doubts about religion began with me leaving Al-Tahrir party. My doubts were summed in one question: What is the reality behind the existence of Islam?

I turned to inspect the scientific miracles of the Quran hoping to end my ever-increasing doubts about the validity of Islam itself and I came to the conclusion that there is no such thing as religion or Islam.

Consequently, my relationship with Islam as a faith ended. I started believing in universal values which are larger and deeper than any religion. It was not an easy decision to abandon Islam; a religion to which I devoted my entire existence.

After giving up on Islam, I was left with two choices: either to convert to anther religion or renounce the idea of religion. Many contradictions within religions made me reject the whole concept of them.

Later, I reverted to the virtual world to re-build my social network. This started with a group called Atheist Republic on Facebook. At first, this group represented an open and a free platform where I could talk about taboo topics. After a while I grew some solid friendships that I am honored to have.

Nonetheless, this shift was not smooth or easy given the influence of my family and social environment. I kept praying for three months hoping that Allah would save me from this illusion and guide me to the right path.

However, Martin’s autobiography refutes theories of constructivism that argue that the individual is a direct reflection of social structure formulated in the concept of “Habituation”[3].

It underlines the fact that the individual is not just a social product, as suggested by the classic argument which advocates the primacy of the structure over the individual. Martin was able to surpass traditional collective structures and form a manifold identity which reflected a process of cognitive and behavioral growth based on the use of reason with a critical perception of prevalent norms. His personal experience enabled him to overstep the collective rationality revealing multiple thinking patterns built on individual convictions. The individual condition, in Martin’s case, was able to penetrate the crippled social structures to become a ‘player within the field of social game’.[4]

From Bajoit’s viewpoint, ‘the individuals do not become themselves unless they oppose the logic of social control in the name of freedom and the free production of the self’.[5] For Martin, getting rid of all cultural and religious legacies represented a form of self-realisation and freedom, despite the internal conflicts he lived concerning his relationship with family and society. He resorted to the virtual world and social network sites to rebuild his social world to validate his new identity. Martin lived a continuous process of deconstruction and re-construction to shape his identity.

However, such identity shifts are often accompanied by several difficulties that prevent many young people from their full self-realisation as they are not totally assimilated in the world global market and consumption. Thus, Martin found many difficulties during various stages of his life, the hardest of which was when he abandoned the jihadist group. By doing so, Martin rejected all social and cultural values he espoused at a certain point of his life. Presumably, this phenomenon is an outcome of the turnovers taking place in some communities. François Dubet suggests that these turnovers catalysed the collapse of institutions. Yet, Touraine claim that they signaled the end of the idea of community[6] as institutions become devoid of meaning, illegitimate, and unable to meet the needs of young people which foster a state of doubt and uncertainty about their future. This is what makes young people look for individual ways to achieve their self-realisation that may culminate, as in Martin’s case, in rejecting all community institutions as well as cultural and intellectual. They tend to discard all traditional frameworks and official institutions in search for a new meaning to their lives, be it jihadism, atheism, or other options to form an individual identity.

Samiha Hamdi is a PhD candidate at the University of Sfax, Tunisia. She is also a research assistant for an MEC project entitled ‘Trust, Constitution and the Process of Subjectification among Tunisian Youth‘ led by Dr Aitemad Muhanna-Matar.

Posted In: Notes from the Field | Tunisia 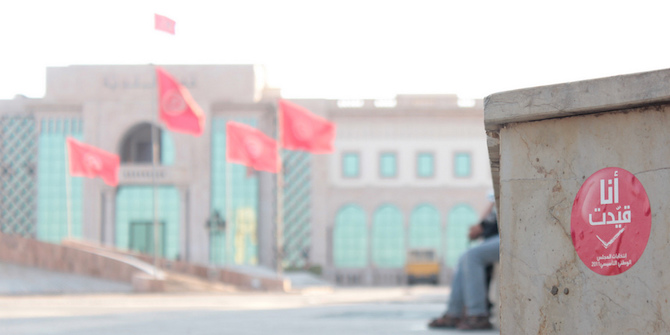 Can Tunisia’s Experiment Spur Democracy in the Region? It Depends on the Economy

Bad Behavior has blocked 1667 access attempts in the last 7 days.