How do politics of sight affect the ways in which participants and observers understand violence during the Arab Uprisings? By ‘politics of sight’ I mean to indicate the ways in which violence is mediated—voluntarily or involuntarily—by distance, disguise, concealment, language, and/or technology (to name a few options).[1] The goal here is not to argue that there is bias in the reporting of violent politics. That fact is well established.[2] Rather, I hope to explore the practices that render specific categories, processes, or performances of violence ‘visible’ to those who do not experience or witness them firsthand and to argue that these practices interact with scholarly research ethics.

During the Arab Uprisings, platforms such as text messaging, Twitter, Facebook, YouTube, Skype, and Tumblr have connected actors in ever expanding ways. Much—perhaps too much—has consequently been made of these technologies’ mobilising potential and ostensible democratising effects. These outlets, as well as more established media such as newspapers, television, and word of mouth also act as filters and prisms of violent processes; they record only some acts and do so in specific ways. In other words, these technologies tend to highlight specific modes of, and participants in, violent contention while obfuscating others. In Egypt, for example, audiences have been made to see female sexual assault survivors but not abused street children. In Palestinian refugee camps in Lebanon, journalists highlight the harsh conditions in which Syrian refugees live while masking the suffering of Palestinians who have been there for as long as 65 years. This selection effect is often—though by no means always—generated through agentive action.

As a consequence, social media in particular frequently privileges the contemporary, the public, and the popular aspects of violent contention, thus limiting understanding of ongoing processes. Media technologies may be used to construct an overarching narrative that is not present or hegemonic on the ground.[3] They also frequently encourage actors to engage in politics of contention that is easily rendered visible to outsiders (one partial example being the widespread use of English on protest signs). By incentivising the production of material that garners site visits, shares, and ‘likes’ (given that ‘like’ is often understood as ‘dislike’), social media in particular has the potential of making specific forms of contention more popular both within and across conflicts. Outside observers consequently only see slices of what scholars have referred to as ‘the repertoire of contention,’[4] and produce flawed analyses and policies. Studying how social networks—whether connected by technology or personal relationships — render violence visible to their members is thus an important path to understanding the politics of the Arab Uprisings.

The onslaught of specific types of images, video, and audio forwards the assumption that all violence is visible and ripe for categorisation. It implies that participants have the capacity to witness all violent acts, photograph all wounds, and to interview relevant categories of people face to face. The availability of so many images and their graphic, unedited nature—think of the death of Mohamed Bouazizi, the Houla massacre, or the assault on the Girl in the Blue Bra—misleads participants and observers into believing that every violent act can be captured and exported. A question arises: if there is no visual record of the act and there are no victims to interview, did something really happen? After all, if suicide, slaughter, and sexual assault can be filmed, what acts are impervious to recording? If one video of torture in a government or rebel prison makes it onto YouTube, won’t they all? The prevalence of recorded ‘proof’ of violence distances observers from the lived experience of participants in violent contention, problematically favoring what is physically recorded over the emotions and understandings that drive political outcomes.

The availability of massive quantities of information also masks the multitude of ways in which it is skillfully managed, channeled, and selectively blocked. The coercive and emotional power of violent contention, after all, is based on the presence of an audience. Belligerents engage in a politics of sight by establishing various systems—doling out journalist or student visas on some days and not others, disputing footage as ‘unverified,’ creating checkpoints in order to complicate movement and interaction, allowing interviews with some officers or sub-units and not others—that limit and distort the image of events by omission. Scholars, policymakers, and journalists have yet to extensively explore the ways in which belligerents decide what violence to show and what to hide. Doing so would not only deepen comprehension of violent processes, but also contribute to more ethical approaches to the study of violence.

Not only does this trove of material presume access to spaces, but also to bodies. Attempts to shed light on people plight violence by emphasising particular categories of victimhood—amputee, sexual assault survivor, tortured prisoner—can support a perversely dehumanising narrative that asks ‘what is this man/woman/child a case of?’ rather than ‘what is this person’s experience as a participant—willingly or unwillingly—in a political process?’ It can also privilege some groups’ suffering over others’ creating problematic hierarchies of suffering.[5] Assuming access—as some have pointed out—can also result in re-victimisation, where those who have suffered are told that certain experiences are valid examples of victimhood while others are not.[6] Moreover, reducing people to statistics renders violent processes as singular, independent events suspended in time, rather than as co-dependent and evolving systems of practices, emotions, and symbols. Privileging numbers and statistics over process is not only reductionist; it is also misleading. A civilian may die because he has been struck by a rebel’s bullet, but his death is the result of a larger repertoire of violence that places civilians in the crosshairs.

On this note, is worth exploring the physical, emotional, and social work of violent politics. The politics of sight frequently focuses on what may casually be described as the ‘sexy’ or ‘romantic’ (if often dangerous, frightening, dirty, and physically taxing) labor of violent contention. For example, the Syrian government has proudly highlighted its all-female paramilitary units.[7] However, sustained armed conflict requires that some actors to keep their hands clean. Only infrequently do we see the operations officers who ship food to the troops or the counterintelligence agents who search for regime informants.[8] Indeed, some work must necessarily remain hidden from the eyes of enemies or future donors. But many Western editors also emphasise carnage alone in order to sell stories; just ask Italian journalist Francesca Borri, who wrote on Islamist parties’ social service systems ‘What’s this? Six thousand words and no one died?’[9] Discounting the idea that not everyone participates on the front lines contributes to an impoverished understanding of who takes part in the work of violence and the reasons that they do so for. [10]

Shifting analyses of violence to incorporate these dynamics has the potential to provide new insights into the processes that have defined the Arab Uprisings. However, it is also an important step towards an ‘ethics of sight’ for scholars studying contentious politics; how might their research questions and analyses rely on well-established lines of sight—or disciplinary incentives—but unintentionally contribute to the erasure of people and processes? While the spaces, practices, roles, and symbols that are observable in Libya may be concealed or obfuscated in Yemen, studying why and how this is the case could shed light not only on violent processes, but also on regime, organisational, and regional politics. Acknowledging that participants and observers cannot see, record, or categorise everything may ironically provide more clarity on the politics of violent contention than more images ever could.

Sarah Elizabeth Parkinson is an assistant professor in the global policy area at the University of Minnesota. Her research examines organisational behaviour and social change during and following war.

[6] See, for example: ‘Palestinian Refugees Are Not at Your Service.’ 2013. The Electronic Intifada. Accessed May 17, 2013. http://electronicintifada.net/content/palestinian-refugees-are-not-your-service/12464. 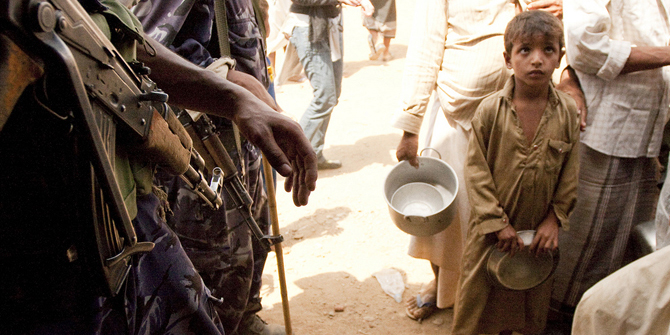 The House of Saud’s War in Yemen: A Looming Afghanistan?

Yemen’s Negotiated Transition between the Elite and the Street