Following Israel’s targeting and killing of a number of high-ranking Hezbollah and Iranian military officials in Syria, Dr Filippo Dionigi reflects on what Hezbollah and Iran’s reactions might be and what this escalation means for Israel. Filippo will be launching his book, Hezbollah, Islamist Politics and International Society, at LSE on Monday 2 February 2015.

Israel’s stance towards the conflict in Syria and Iraq has been – until recently – a cautious ‘wait and see’ policy whereby no major interventions have been recorded apart for sporadic operations carried out in Syria or on the Syrian border with Lebanon targeting weapons allegedly being transferred to Hezbollah. Previous operations took place in December 2014, not far from Damascus, and in February 2014 on the Syrian/Lebanese border. In October 2014, another incident between Hezbollah and Israel occurred on the Southern border of Lebanon, which followed an episode of violence that took place in September when a member of Hezbollah was killed by an Israeli device. The relative minor nature of these incidents, nonetheless, has been more indicative of self-restraint than the will to engage in full military confrontation.

But last Sunday, an escalation seemed to take place when Israel targeted a number of high-ranking Hezbollah and Iranian military officials. The attack took place in the Syrian controlled area of the Golan Heights, which Israel occupies since the 1967 war, and killed at least seven people. In the attack, Hezbollah lost a military commander and a young but symbolic figure Jihad Moughniyeh, son of the high-ranking military cadre Imad Moughniyeh (assassinated in 2008 in Damascus). Among the Iranians, Brigadier General Mohammed Ali Allah-Dadi was killed in the attack, a member of the Revolutionary Guard who, according to Iranian sources, was operating in Syria as a military advisor to Bashar al-Asad’s regime.

The questions that this recent event raises are at least two; the first concerns the motivations that have caused Israel’s change in strategy and therefore escalate its involvement in the situation. The Syrian conflict has not represented until now a serious threat for Israel. In fact, and perhaps paradoxically, Hezbollah and Iranian operations have protracted the existence of al-Asad’s regime, which has never been a reason of serious concern for Tel Aviv in terms of security.

From what we know at this point, no answer can be definitive for this question. It may be speculated that Israel might be interested in assessing the extent to which Iran and Hezbollah are affected by the increasingly long and consuming conflict in Syria. The kind of response that Israel operation may cause from Hezbollah and Iran will be an indicator of how their involvement in Syria is weakening the two allies economically, militarily, but also in terms human lives. Other conjectures on Israel’s decision may take into account the upcoming Israeli elections. A successful military operation targeting Israel’s archenemies may benefit the popularity of the current government. On the other hand, the reactions to Israel’s attack may also be equally detrimental to the popularity of the government.

The second question that the Israeli operation raises is how Hezbollah and Iran will react to it. A response, in one way or another is to be expected, because this Israeli operation is significantly more provoking than previous attacks. It is not surprising that declarations of retaliation have been already made by both Iran and Hezbollah, but what will follows in practice can only be guessed. With a front open in Syria, Hezbollah seems to be in a relatively unfavourable position, compared to the past, to get involved in a conflict with Israel. Other signs have been interpreted as indicative of a delicate situation for the Shiite movement in Lebanon. A few weeks ago, a high ranking member of the party led by Sayed Hassan Nasrallah, was discovered spying for Israel, although it is not clear what actual damage was made by the hole to Hezbollah’s security. The current phase, then, is far from ideal for Hezbollah to get involved in another conflict and it may decide to postpone any retaliatory measure to more favourable time.

The repercussions for Iran are also puzzling. Iran is deeply involved in the regional conflict and the economic, as well as military, costs related to it are high to sustain in times in which the Islamic Republic is still subject to economic sanctions. Opening a front in the Golan will further complicate matters – notwithstanding the heated rhetoric of the past decades – Iran has never directly targeted Israel militarily; it is difficult to imagine that Tehran may decide to embark on such an adventure in the current circumstances when it is engaged in a phase of rapprochement with the West and facing a challenging regional scenario.

Israel’s attack in the Golan seems a risky move by Tel Aviv that is much more provocative than beneficial to its security. It has marked a change in stance towards the regional conflict but hopefully will not have major consequences, at least in the short foreseeable future.

Dr Filippo Dionigi is Leverhulme Early Career Fellow at the LSE Middle East Centre, researching the impact of the Syrian refugee crisis on Arab statehood from a comparative perspective. Filippo tweets at @FilippoDionigi. 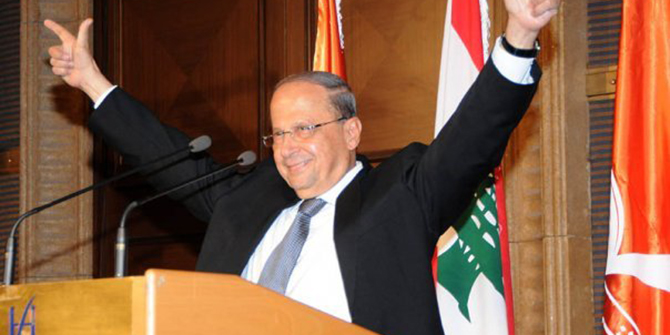