The role of the internet in the popular protests of 2011 cannot be overestimated. In real time, online activists escaped censorship and communicated to thousands, if not millions, of people. And when they wrote, they used mostly colloquial rather than Classical Arabic. Why? University of Leeds’ Saussan Khalil, who will presenting at the BRISMES Graduate Section Conference at LSE on 11 June, explores.

For centuries, Classical (CA) or Modern Standard (MSA) Arabic have been the accepted forms of writing in most literary realms. On the internet however, a different picture emerges; the most well-known social networking websites such as Facebook and Twitter, as well as popular blogs written in Arabic, clearly show a preference for using colloquial Arabic rather than classical, particularly in Egypt. Some of the most popular blogs have even been published in colloquial Arabic in print, showing for the first time the effect of the internet on print publishing.

Most Egyptians use colloquial Arabic in their day to day communication, a fact that goes a long way to explaining a preference for their own dialect over MSA generally. Further, MSA is perceived as difficult to master which begs the question: why has MSA been used for writing for so long? Aside from the prestige MSA enjoys as the language of religion and education, as anthropologist Niloofar Haeri (2003) has observed, state control and censorship have been the main reasons. For example, the Egyptian government owns the largest publishing company in Egypt (al-Misriyya al-‘aamma lil-Kitaab), whose resources and sheer number of publications dwarf all other publishing houses, thereby giving the government tight control over the market. Since Classical Arabic is the official language of the state, the government upholds and reinforces this by publishing in Classical Arabic.

Writing online, however, has democratised the writing process and liberated writers from the control of the state. Writing in MSA often requires mental translation from colloquial to MSA, followed by ‘correcting’ by professional correctors. Writing online however, is a shorter, faster process that naturally lends itself in the same way that the writer speaks. Colloquial Arabic is also perceived by Egyptians to be more ‘direct’ than MSA and better suits the fast-paced, short-lived speed of the internet.

Online political activists were able to mobilise thousands to take to the streets in protest. Would they have been able to do the same had they used MSA rather than colloquial Arabic? Writing in MSA may have risked their message being perceived as empty rhetoric, rather than a fresh call for genuine reform. In fact, the type of colloquial language they use is important too. Online activists are typically highly educated and often bilingual. They may use MSA vocabulary to elevate their language while keeping the structure essentially colloquial. So it would seem that colloquial Arabic may also have been used because it is more capable of expressing messages of protest.

The example below from the 6 April Youth Movement, which organised the original protests in Egypt in 2011, shows the language they normally use to communicate on their Facebook page. The use of MSA at the beginning of the post marks the ‘official’ part of the message. It reports a fact: the polls will close in three hours. However, the language is quickly identifiable as colloquial Arabic from the second sentence to the end of the post. The language choice reflects a direct, heartfelt emotive appeal to potential voters.

The image below shows some of the comments posted in response to the above post. The language used is predominantly colloquial Arabic written in Arabic script. The posters and readers are equals, each freely expressing their opinions. This equality is reflected in the language used since MSA would imply superiority of the writer, whether in knowledge or power.

It is worth noting the way in which colloquial Arabic is written since it is not a formal written form of the language. The original post is in entirely Arabic script and all of the comments, except one, are also in Arabic script. Romanisation or Latinisation of Arabic on the internet, in which users phonetically write Arabic in Roman or Latin characters, is common. However, this relies on both the writer and reader’s knowledge of those alphabets, whereas any literate speaker of Arabic would be familiar with the Arabic alphabet. Therefore, writing in the Arabic alphabet as these messages are rather than the Roman alphabet, means the writer reinforces the ‘Arabness’ of their message that may be lost with a non-Arabic script.

It is also notable that many spelling rules are relaxed. For example, the use of the ‘hamza’ when combined with the letter ‘alef’ is almost entirely absent. For example in the original post: اول ، اي ، اوراق instead of أول ، أي ، أوراق. Even in the comment written in MSA by Hossam Seif Elnesr, the hamza is not used with alef in the word اجل , which is used twice in the same comment. This apparent relaxation of the rules with regards to spelling seems to fit with the perception of colloquial being easier and faster to use than MSA.

I hope these images have provided a good example of the type of language used in online writing in Arabic, which seems to be predominantly colloquial Arabic with some MSA. Further investigation into the language of online writing is much needed, as it has played a huge role in the revolution of 2011.

Saussan Khalil is a PhD student at the University of Leeds. Prior to commencing her PhD, Saussan completed an MA by Research titled Teaching Communicative Arabic: Egyptian Arabic as an Option. Saussan works as a translator and has previously taught Arabic as a foreign language. Her research interests include modern Arabic language studies, Arabic language use on the internet and studies of colloquial/Modern Standard Arabic. Saussan is on Academia.edu and LinkedIn, and can be contacted at s.khalil@leeds.ac.uk. 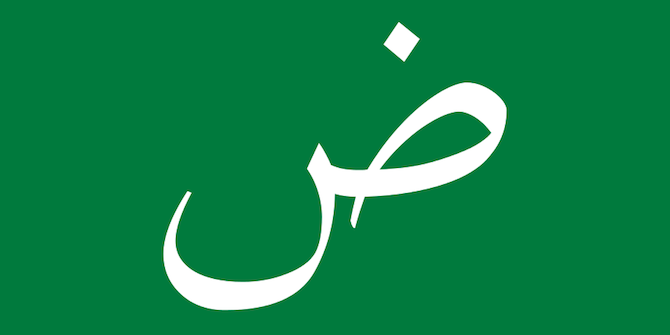 Bad Behavior has blocked 829 access attempts in the last 7 days.