While it is understandable that the title and blurb of this new book from Pascal Menoret should give pride of place to the eye-catching topic of joyriding in the Saudi capital, this framing perhaps risks underselling a work that is truly ambitious in scope. In fact, original analysis of the youth pastime of “drifting” emerges as only one of several contributions made by the book; this element being situated within a far broader and quite compelling account of how the kingdom was transformed in the second half of the twentieth century by integration into global markets, internal migration, state violence and urban expansion.

Following an introductory chapter establishing key themes and some preliminary history, the second chapter “traces the contours of the Saudi political realm” through an extended discussion of the twists and travails of ethnographic fieldwork in the shadow of “pervasive yet unpredictable repression” (p. 19). It is in the third and fourth chapters that Menoret really begins making inroads into the core subject matter. Drawing in part on research in the archives of the Greek city planner Constantinos A. Doxiadis, who drafted a 1971 master plan for Riyadh, he traces how a “high modernist” vision for the city was ultimately subverted by the capricious forces of the real estate market and royal patronage. These chapters offer a vivid story of the city’s growth in which official tropes of prosperity and development give way to displacement, segregation, conflict and chaotic suburban sprawl.

It is only in the fifth and sixth chapters that the joyriders of the book’s title really take centre stage. Here, Menoret considers how “young disenfranchised Saudis” reappropriated this new urban space “through their use, misuse, and abuse of cars” (p. 20). These chapters locate the history of drifting within the same dynamics of economic transformation and social dislocation that shaped modern Riyadh. They also consider the emergence of a distinctive drifting subculture, efforts to tackle the phenomenon by means of “moralization and repression” (p. 20), and its eventual criminalisation and politicisation.

In a book framed as an ethnography of joyriding, Chapter 6 is perhaps a little late to tell the reader that “in most cases, it was impossible to even chat with drifters” and that the author had only “few” such conversations; entirely understandable as this may be, given the underground nature of the pastime and Menoret’s own standing as an outsider tailed by the secret police. Nonetheless, Menoret derives a wealth of insights from the ethnography that he did succeed in undertaking with those operating both within and on the margins of the drifting subculture, presented in evocative vignettes and vibrant colloquial translations of his interlocutors’ own reflections. Furthermore, he draws on a raft of striking cultural artefacts, including songs, YouTube videos and online texts produced by and for joyriders, as well as press coverage and the output of criminologists, sociologists and preachers.

Having lived for four years in Riyadh, Menoret can claim to know Saudi Arabia better than many foreign researchers. Though the present work is the first book-length product of his doctoral and postdoctoral research, he had previously settled in the kingdom as a teacher in 2001 and published a book which would appear in English as The Saudi Enigma: A History in 2005. These several years spent in the country, combined with what are clearly very strong language skills, provide for the empirical richness and ability to give voice to Saudi youth culture which are defining features of Joyriding in Riyadh.

The author’s background presumably also contributes to his capacity to offer a nuanced and fundamentally human picture of life in the kingdom. Rather than trite invocations of a society riven by a fundamental contradiction between tradition and modernity, between the mosque and the mall, what emerges here is a far more subtle fabric of ambiguity, ambivalence and fluidity, of the kind that exists in all societies. We hear of a joyrider known for his drink driving who would halt his night-time revels long enough to attend mosque for dawn prayers before returning to the wheel; a youth subculture marked by homophobic insults, an aggressive and violent brand of masculinity, and seemingly quite open celebration of aestheticised “homosocial romance”; and drifters turned streetwise religious preachers who strive to save the souls of their former cohorts from roadside tents.

Another strength of the book is a real sense of intellectual integrity, including a willingness on the part of the author to be quite frank about his own understandably convoluted research trajectory and the limitations of his knowledge as an outside observer. Some readers may find extended meditations on the fieldwork process a distraction from the main arguments. However, these passages will certainly make interesting reading for anyone who has undertaken fieldwork in Saudi Arabia or who is considering doing so. More broadly, with their self-aware consideration of the place of a foreign researcher in a politically repressive environment, and sanguine reflections on the ways in which research projects may evolve productively through sequences of mishaps, setbacks and unexpected opportunities, they would be well worth the attention of any postgraduate student embarking for the first time on extended fieldwork in comparable circumstances.

If there is one question which feels unresolved in the book, it is the precise status of drifting as a political act or phenomenon. Early on, the author acknowledges the danger of giving in to the “romance of resistance”, the temptation “to end up naively interpreting youthful exuberance as subversive rebellion”; he promises to avoid presenting joyriding as “a fight for freedom” (pp. 16-18). Yet for all the nuances of Menoret’s analysis, there seems to be a persistent tension here – at least in tone – with the notion of “road revolt” invoked in the book’s title, with the idea of joyriders waging “a war on the state” (p. 198), and with the description of drifting as “a way of confronting the state in its most basic operations: managing public spaces, protecting private property, and enforcing the law” (p. 11). Certainly, the welcome note of caution early on in the book seems at odds with passages comparing drifting indirectly with the Occupy Wall Street protests (p. 163), or directly with the torching of stage coaches by “nineteenth century European revolutionaries” (p. 206).

In the final chapter, Menoret argues that drifting came to be politicised in three ways: firstly, it was “constructed by sociologists, criminologists, and preachers as a public issue”; secondly, “joyriders also identified the political value of their driving practices”, as “a revolt against state surveillance” and “a way to physically escape police repression”; and thirdly, joyriders exercised “an agency in their own right” and “actively criticized the production of space in Riyadh” (p. 177). But what are we to make of all this if, as he affirms, the “speed and mobility” of joyriding “ultimately pointed to a nowhere” (p. 205)? In that case, is there not perhaps reason to give more weight to the conclusion of the Saudi sociologist Salih al-Rumayh, as paraphrased by Menoret, that drifting in fact functions as “the opium of the downtrodden” (p. 196)? Menoret has much to say on these issues and his overarching reading of the drifting subculture as constituting a “plebeian public sphere” is valuable. At the same time, for this reader at least, there remains a sense of unresolved tensions implicit in these various angles on the political import of joyriding. Perhaps that is in keeping with a work which, as noted above, has the strength of acknowledging ambiguity in social life.

This is an insightful, important and unique book. It is extremely readable and will be accessible to students of all levels, as well as others inside and outside academia with an interest in the Gulf, urban history and politics, and gender and sexuality in the Middle East.

Michael Farquhar is a Leverhulme Early Career Fellow in the Department of Politics and International Studies at SOAS. He is currently completing a book manuscript on the history of Saudi state-funded Salafi missionary work around the world in the twentieth century. He is also working on a new research project, on the politics of crime, policing and economic transformation in modern Egypt. 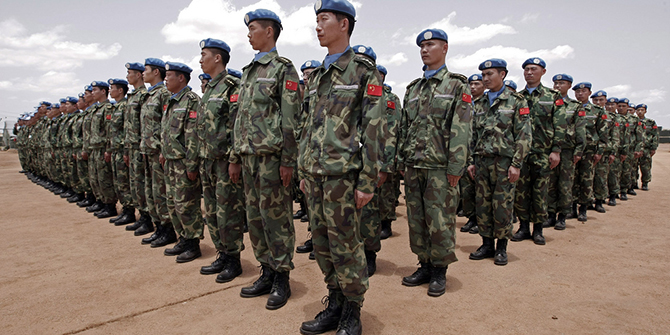 Book Review – The Politics of International Intervention: The Tyranny of Peace

Bad Behavior has blocked 977 access attempts in the last 7 days.