With oil prices dropping massively and losing almost three quarters of their mid-2014 value in a matter of months, the Kuwaiti government is facing real budget deficit and is struggling to reduce its current spending. In the past fifteen years, Kuwait saw a steady budget surplus, which allowed it to gain KD 231.1 billion (USD 772.4 billion) and accumulate an impressive reserve fund, as well as create an active foreign investment portfolio. However, the government has also been practicing extensive welfare provision as means to distribute oil wealth to the population in exchange for political obedience. This has been primarily reflected in the government’s patterns of employment, according to which most of the national population is employed in the public sector. Furthermore, the government does not practice direct taxation, extensively subsidises utilities, staple food and housing, and offers free education and medical care. As such, the welfare provision has long ceased to be seen as a privilege, but is rather considered an inherent right and a part of the social contract.

These policies, coupled with the rapid growth of population, have led to the bulging of the government sector and the subsequent fast increase of budget spending on wages. Within the 10-year period between 2001 and 2011, public sector salaries and subsidies increased by 540%[1].

Even faced with today’s financial difficulties, the country will not all of a sudden run out of money. A huge reserve cushion and the ability to produce oil at a very low cost keep Kuwait in a good shape compared to other oil producers. However, if the country was to keep spending at the same rate, the government is most likely to see a shortfall of an estimated KD 11.5 billion (USD 38 billion, which is 30% of GDP) in the 2016-17 fiscal year alone.

In line with the other GCC states, Kuwait is currently trying to introduce certain austerity measures, which would curb the welfare provision and reduce budget spendings. For examble, the government is proposing to increase the price for electricity and petrol. It is also mulling the introduction of taxes, such as VAT as per the common GCC initiative, and corporate tax.

What could all these measures mean for Kuwait’s private sector? First of all, one needs to keep in mind that the dominant private sector in Kuwait, i.e. its elitist oligarchic merchant community with high barriers of entry and historically close ties to the ruling family, has been itself hugely and disproportionately benefitting from the government’s distribution schemes. Due to protectionist legislation, it managed to monopolise the business opportunities and exclusively occupy various niches and fields of private sector economy. Most businesses are to a large extent feeding off the government’s contracts. They are further heavily reliant on state-subsidised utilities, such as water and electricity, as well as cheap foreign labour, and greatly benefit from the absence of taxation.

All this means that the private sector, as a much larger consumer, could be potentially hurt the most by the removal of subsidies. However, throughout Kuwait’s history the business community has proven to be able to exercise substantial influence on the government’s decision-making through formal and informal means to protect its interests. Therefore, although the private sector will surely be affected in some way or another, various exemptions could be possibly negotiated by the representatives of the merchant community.

This became obvious after the government’s recent attempt to lift the subsidy on diesel and kerosene. On 1 January 2015, diesel price was increased from 0.055 KD to 0.170 KD per litre (1 Kuwaiti Dinar equals $3.3). Certain business sectors, such as transport, food production, catering and construction materials manufacturing, were immediately affected. As a result, the government’s measure was followed by price hikes and strikes, and the cabinet was attacked by MPs demanding the abolishment of the subsidies lift. This development forced the government to halt its plans to deal with other subsidised commodities for almost a year. At the same time, exemptions from diesel price hike for various businesses were agreed upon, thus the effect of the subsidy lift was ultimately minimal. In further discussions of subsidies reduction, the Minister of Commerce promised that electricity and fuel subsidies for key economic and industrial sectors would be preserved, because of the government’s ‘desire to encourage them for the sake of enhancing their contributions to the economy and diversifying it’.

With regards to the introduction of taxes, the government is very unlikely to start taxing the general population directly. However, corporate tax has been long discussed. In interviews I conducted with representatives of the business community in May 2015, they confirmed that they saw it coming a long time ago and are generally prepared to accept it. At present, the 15% corporate tax is only levied on foreign companies operating in Kuwait. The government is currently mulling the imposition of another 10% tax on local businesses.

In general, the merchant privileges would not be easy for the government to compromise and manoeuvre around. It will have to ensure that there are means to compensate the businesses, which could be through the government contracts and broader involvement of private sector in infrastructural development projects. This trend is already quite evident in the fact that, although the budget deficit is the main topic in the official circles on the daily basis, the government has not reduced the budget allocations on capital spending. In fact, it has actually launched the record number of megaprojects compared to the past years portraying it as the engine of development.

Nevertheless, in the current economic conditions, the private sector will eventually have to bear the bulk of the consequences of the austerity measures and will be pressured to become the state’s new source of revenue through taxation. This in its turn might bring another important and less expected consequence, that is – the eventual shift of the rentier state social contract, which has been viable because of the established distribution policies. Now that the same level of distribution is hardly affordable for the state, it might lead to the return of the demand for voice and more representation. In this respect, the business community might be the first to exercise the increased leverage on the ruling powers, as the normal dependency lines and power balance of the rentier state are distorted.

Anastasia Nosova is a PhD candidate in the Department of Government at LSE.She is also currently working as Associate Research Fellow on the ESRC-funded research project ‘Re-Negotiating the Social Contract in the GCC: State-Business Relations and Reforms in the Oil-Rentier Gulf Monarchies’, University of Exeter/Georgetown University, Qatar. She holds an MA degree in Gulf Studies from the University of Exeter and a BA degree in Asian and African Studies from St. Petersburg State University, Russia. The major sphere of Anastasia’s research is the analysis of state-business relations in Kuwait. Her thesis intends to assess the current level of involvement of Kuwaiti business community representatives in politics, looking into the means of political influence and participation they utilise. 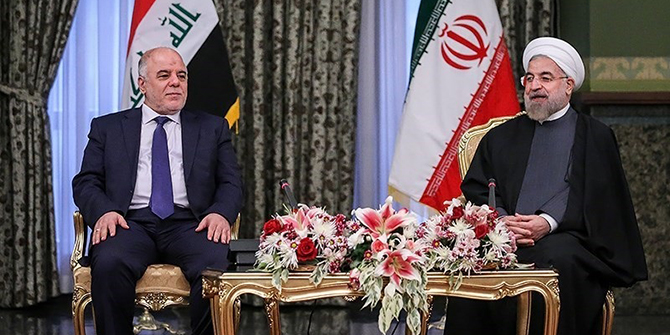 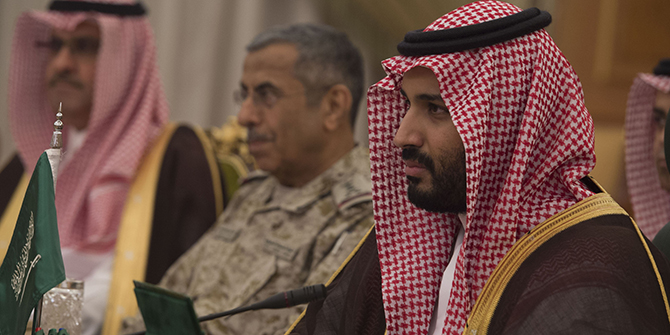