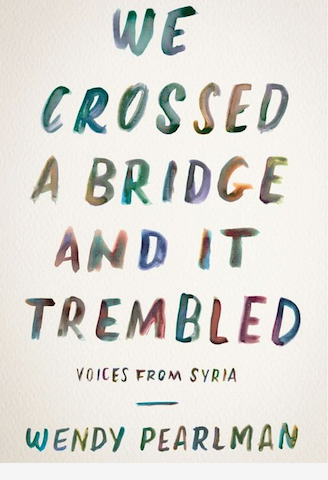 In the Syrian conflict, where conspiracy theories and alternative facts abound, the real voices in Wendy Pearlman’s We Crossed a Bridge and It Trembled: Voices from Syria provide eye witnesses accounts, an essential component to the nearly seven-year long conflict, the anniversary of which takes place on 15 March. As numbers have risen to over 500,000 dead and over half the population of 22 million internally and externally displaced, it’s easy for some to obscure real lives lost and destroyed behind statistics. In 2011, Pearlman, a professor of political science specialising in the Middle East, was in front of her computer at Northwestern University watching the violence unfold. By the next year, she had spent six weeks interviewing displaced Syrians in Jordan. In 2013 she conducted interviews again in Jordan, then in Turkey for two months, returned to Turkey again the next year before following the Syrian refugee trail to Lebanon, Germany, Sweden and Denmark.

In the introduction to We Crossed, she described the interviews she conducted as “open-ended chances for individuals to describe and reflect on life before, during and since the state of the 2011 Syrian rebellion.” Some interviews took twenty minutes; others continued over years, all were conducted in Arabic. More than twenty assistants transcribed and translated the interviews and then Pearlman edited them “for length and readability and used pseudonyms for all speakers” when she was not allowed to identify them by name. Wendy Pearlman sees herself less as the author of We Crossed; she writes that she “curated” the book.

Participants’ names accompanied by a short bio open the book, which in sections follows the trajectory of the conflict, beginning with Authoritarianism followed by Hope Disappointed; Revolution; Crackdown; Militarization; Living War; Flight and finally Reflections.

The over-riding impression one gets is that no matter the level of peaceful dissent by Syrians – large or small, whether in gatherings in public squares or graffiti on the walls – the regime had only one answer for its critics: disproportionate violence.

After a sit-in at the al-Omari mosque in Daraa in 2011, the security services stormed the mosque and killed demonstrators. People from the surrounding villages walked to the city to protest the killings only to be fired upon by the same men.

“This is how the revolution exploded in the entire province,” explained Abu Tha’ir, an engineer from Daraa, “The government sent dead to every village … If I ever write a book about this, I’ll call it How to Spark a Revolution in One Week.”

The last interview Zaher Omareen and I did for our book Syria Speaks: Art and Culture from the Frontline in 2014 was with Assad Al-Achi and I asked him: what changed an essentially peaceful revolution into a violent one? He said it was the targeting of women by Syrian Army soldiers and regime shabeeha thugs, a strategy confirmed in We Crossed by Aziza, a school principal from Homs.

She revealed, “The more people tried to address the issue of sectarianism, the more violent the regime became. It sent shabeeha to do house raids. They’d enter and kidnap young women in front of their families … The men said that they needed weapons to defend themselves. I urged against this. I said, ‘They are trying to force you into killing, which is what they want’ … [But the men] said, ‘We have been patient. We’ve endured and endured but they have ripped our women from our hands. How can we sit by and do nothing?’”

Common cause between the regime and the jihadists was alluded to in 2012 after four young women protested against the killing by both sides. They appeared in public dressed as brides and were at once arrested by the security services. One soldier said to the others, “Why did those filthy whores go out? Were they looking for someone to ride them? Why don’t we take them down to the jihadists. One hundred jihadists would take each bride.” In jail the women saw and heard men being tortured. It was in violence that the regime and the Islamic extremists met.

After two months in prison, the women were freed in a prisoner exchange. Kinda, an activist from Suwayda who had been interviewed by Pearlman, returned to the market where the brides’ protest had taken place and asked a shopkeeper about it.  Upon learning she had been one of the brides he “hugged [her] and started crying”.

He told her a story about  “an old man who used to sell children’s toys, displayed on a table. The day after our protest he cleared everything off the table and put up only four dolls dressed as brides. Just four dolls.”

We Crossed is a modern-day Thousand and One Nights with stories within stories, far more strange and sinister than any one person could make up. At Barnard College, my English professor Catharine Stimpson said it was after 1945 and the Holocaust that the imagination failed. Syria has once again given us a sense of unnerving disjunction where reality has outstripped any dreams we might have had.

One of the last voices in the book belongs to Adam, a media organiser from Latakia who, like many of the other speakers, appears throughout We Crossed. His epiphany? Extremism is the last resort of the hopeless.

He admitted, “What’s crucial in this whole process is that you don’t matter. You as an individual – your aspirations, your ideas about what is right – mean absolutely nothing. And that’s when you understand why people get radicalised. I completely understand why somebody would join ISIS or al-Qaeda or the Assad regime or the Kurdish groups. You are in dire need for a narrative that can justify this futility … This suffering has to be for a reason. Otherwise it’s too painful.”

Adam, who worked for an NGO, said he was too old for dreaming. He’s 29.

Bad Behavior has blocked 2521 access attempts in the last 7 days.