This is the introduction to a series of memos presented as part of a conference organised by the LSE Middle East Centre on 7–8 March 2019, titled ‘Between Institutional Resilience to the Syrian Refugee Crisis and the Resilience of Syrian Refugees’.

The term ‘refugee crisis’ is often critiqued within the refugee discourse for being embedded within a larger crisis narrative in which Europe is seen “as a continent under siege” and refugees are depicted as simultaneously a threat to order and victims of conflict. Similarly, terms such as ‘resilience’ has become buzzword used to refer to the humanitarian response to the Syrian ‘refugee crisis’, as well as the subsequent development efforts that host countries implement to tackle refugee-related challenges alongside other domestic concerns. However, there is no consensus on what ‘resilience’ actually means or how it can be put into practice.

In the spirit of challenging hegemonic refugee narratives and questioning common refugee-related research methodologies, a two-day conference was organised by the Middle East Centre to bring together scholars and practitioners and critically explore how ‘resilience’ is conceptualised and enacted by different stakeholders in the humanitarian–development nexus. The conference questioned how key institutional actors responded to the massive influx of forcibly displaced people seeking refuge in Syria’s neighbouring countries. In particular, it addressed the shifting trends in ‘resilience-building’ approaches adopted by international organisations (like the United Nations) and different levels of government in host countries (such as Turkey, Jordan and Lebanon). Conference participants questioned the durability of suggested solutions for refugees, who often find themselves in situations of ‘permanent temporariness’ in which they are unable to safely return home, while frequently struggling to guarantee a stable and effective long-term plan in their new place of settlement.

Refugees’ experiences are largely shaped by regimes that regulate and restrict their mobility, as well as their access to labour market opportunities and health care. However, they should not be treated as a monolith or passive recipients of humanitarian assistance. When framing and conducting refugee-related research, there is a pressing need to shift the dominant discourse away from victimhood narratives. The conference served as an opportunity to raise the importance of revisiting the ways in which refugee-related research is conducted. These include the need to centre refugees’ voices in research that involves them, highlight their agency, and adopt an intersectional framework, not in its tokenised and depoliticised form, but rather as an effective means to understand the overlapping systems of oppression that shape refugees’ lives, based on factors such as class, sexuality, gender and race. Conference participants also identified common research practices that perpetuate problematic assumptions about refugees, and addressed the limitations of existing codes of ethics when conducting this type of research.

This series of blog posts serves as an overview of some of the discussions about ‘resilience’ in the context of forced displacement, as well as about research methodologies in refugee-related work. It highlights some of the main topics that emerged from the conference presentations and participants’ research. Pieces range from discussions on competing policy approaches for refugee resilience building in Lebanon, to the gendered challenges of refugees’ labour market participation in the context of the Jordan Compact, and raises questions on the dynamic nature of refugee agency and positionality in different contexts, based on interviews carried out with Syrian refugees in Gaziantep and Cairo respectively.

Yasmine Kherfi is Projects Assistant at the Middle East Centre, working on the administration of different projects and providing research support. Yasmine is interested in feminist theory and praxis, transnational solidarity movements, and development planning in (post)conflict settings. 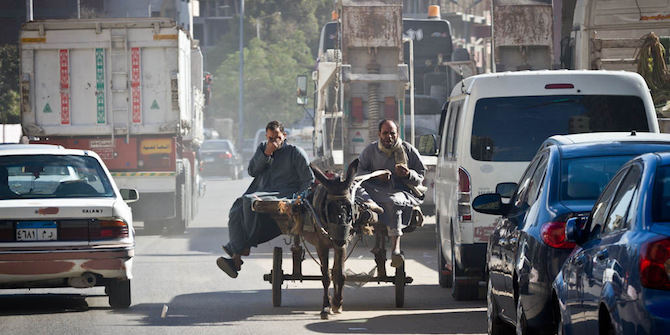 Bad Behavior has blocked 1508 access attempts in the last 7 days.