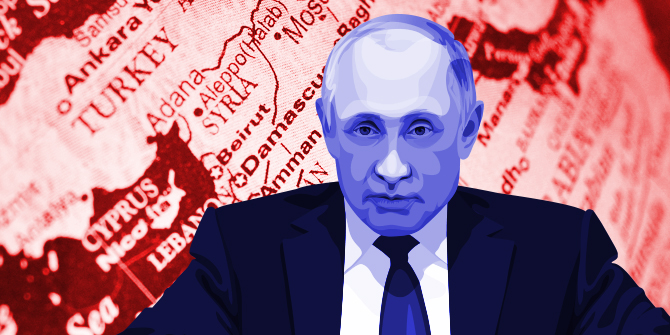 Russia’s 2015 intervention in Syria, which caught many by surprise, seemingly heralded Moscow’s triumphant return to the Middle East. But Russia had in fact been edging its way back into the region since at least 2007, emphasising political and economic relations over security relationships. While Syria may not have been the start of Russia’s involvement in the Middle East, Russia’s activity in the region has most certainly increased since September 2015. Since its intervention in Syria, Moscow has signed investment, energy and arms deals with states throughout the region. Senior Russian dignitaries – including President Vladimir Putin – have increased the tempo of their personal engagements with Middle Eastern leaders. These activities have drawn regional states closer to Russia, but significant roadblocks to the depth of these relationships remain.

The RAND Corporation and the LSE Middle East Centre convened a workshop on 28 March 2018 bringing together analysts specialising in Russia and the Middle East. The workshop was the third in a series that examined the dynamics of Russia’s activities, relationships and overall strategy in the Middle East in order to identify the limitations of Russia’s approach to the region.

The workshop was split into four sessions, each exploring a relationship certain Middle Eastern countries and Russia. The first session examined the contours of Russia’s relationships with the Gulf states, both as individual states and as a regional bloc. The second session delved into the complicated relationship between Moscow, Baghdad and Erbil, emphasising the role of energy. The third session explored Russia’s seemingly strengthened security partnership with Iran, highlighting the political and economic points of friction. Lastly, the final panel examined Russia’s involvement in Syria and Moscow’s relations with the Assad regime. This blog series features a selection of memos presented at the workshop.

Bad Behavior has blocked 1513 access attempts in the last 7 days.