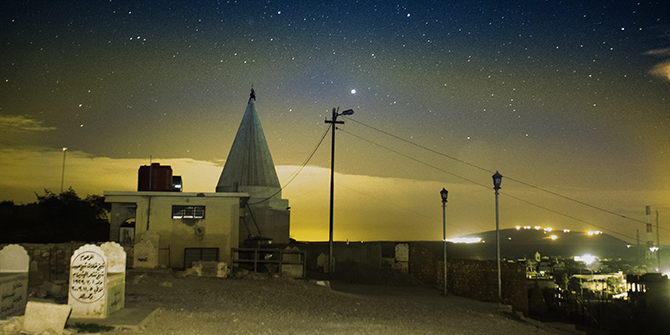 The sun greeted me as I woke on the morning of 3 August 2014. I was a researcher at the University of Duhok, 200 miles from Sinjar. It was to be a happy day as I was waiting –  first for my salary, and then for Roza, my then-fiancée. Roza and I had plans to go shopping for our engagement party, which was to take place a few days later. We were excited, our future now starting to unfurl before us. We have not felt that way again since.

As Roza and I waited at the bank, uneasy murmurs started around us, and phones began to ring. My phone vibrated; a friend was calling. ISIS has attacked Sinjar, he said frantically. Time stopped as the news took hold of us. Roza phoned her sister who was at her home on the outskirts of Duhok. Her sister told her that videos were being published online of ISIS fighters in Sinjar, and that there were news of killings of Yazidis in the streets. I called another friend, a Yazidi man in a village in Sinjar, who described ISIS vehicles with banners and heavy artillery driving past his home. My mother who was in my family’s town of Bashiqa, also called to say she had heard that ISIS was slaughtering Yazidi men and taking away women. Yazidis are fleeing, she said, urgently.

I withdrew as much cash as I could and ran outside to flag down a car to take me to my mother in Bashiqa. Roza waited for a bus to take her to her family’s village outside of Duhok. We said goodbye tearfully, but quickly. We weren’t sure if and when we would see each other again. I made my way to my town, into which ISIS had not yet advanced. My entire family was put into the cars and drove to Lalesh, the Yazidi holy site near Duhok. Concerned that ISIS would advance to Lalesh, women and children were then driven by car to Duhok. Some of my uncles and myself followed on foot. Two days later, ISIS had occupied Bashiqa. My family survived, but thousands of Yazidis in Sinjar did not.

The Yazidis are a religious minority that has existed for millennia. With less than a million individuals, most of us live in the Kurdish Region of Iraq. Other Yazidi communities live in Syria, Turkey, Russia, Armenia, Georgia, as well as farther afield, in Germany, the US and elsewhere. The Yazidi faith descends from the ancient religions of Mesopotamia, and today we believe in the one God. That the Yazidis are a pre-Judaic religion, and so are not ‘People of the Book’, has long motivated the political, economic and social marginalisation of our community.

At various points throughout our history, attempts have been made to wipe us out– we regularly refer to the ‘73 genocides’ that we have suffered. Prior to the ISIS attack, it was the Ottoman Turks who had made the most successful attempt. Misunderstandings of our faith are deeply rooted and it is not uncommon for people to casually – and wrongly – refer to us as ‘devil worshippers’ or ‘those who worship stones’. ISIS founded its genocidal attack on these old prejudices.

In the early hours of the morning of 3 August 2014, while I was still asleep in Duhok, ISIS fighters left their bases in Iraq and Syria and moved towards the Sinjar region in northwest Iraq, close to the Iraqi–Syrian border. Hundreds of villages are spread out around the base of Mount Sinjar, with one main town, Sinjar town, huddled at the base of the southeastern side of the mountain. Mount Sinjar, an arid 100-kilometre-long mountain range, forms the region’s heart. Before the ISIS attacks, the majority of the region’s inhabitants were Yazidis, with a smaller number of Sunni Arabs. The relationship between the Yazidi and Arab communities, who lived together in Sinjar town and in some of the other villages, was built on friendship and neighbourly relations that extended across generations.

ISIS attack on Sinjar came two months after they occupied Mosul in June 2014. It was quickly apparent that the Yazidis were their target, our existence perceived to be a stain on their so-called caliphate. Some families fled into the Kurdish Region of Iraq. Others escaped to the upper slopes of Mount Sinjar, where they were besieged by ISIS. Thousands were trapped under Iraq’s August sun, with no shade, water, food or medical care. Hundreds died on the mountain before the Syrian Kurdish forces, operating under the cover of Iraqi and American airstrikes, rescued the survivors.

ISIS captured thousands of Yazidis in their villages or on the roads during their attempt to flee. Within 72 hours, most of the villages had been emptied, with the exception of Kocho, which ISIS did not vacant of its residents until 15 August 2014. Upon capture, ISIS fighters separated Yazidi men and adolescent boys from their families. Almost all of the men and boys were executed, often by a shot to the back of the head. Their families were sometimes made to watch. ISIS fighters then moved the Yazidi women and children deeper into ISIS-controlled territory where they were registered. ISIS took note of the ages of the women and girls over the age of 9:  whether they were married or not; whether they had children and, if so, how many. In short, they were pricing them.

Yazidi women and girls have been sold and resold into sexual slavery, beaten, starved and forced into labour in the homes of ISIS fighters. ISIS does not permit the sale of Yazidis to non-ISIS members, but the money to be made is enough for fighters to risk their own lives breaching this rule. Fighters sell women and children back to their families for tens of thousands of US dollars. Yazidi families are selling all they have, and borrowing more, to buy back their women and children from the men who raped and tortured them. There has been tremendous media attention on Yazidi women and girls who have been enslaved – but there has been little attempt to understand how the crimes ISIS commits against our women and girls fit into the group’s attempts to destroy our community. The Yazidi women and girls held by ISIS are not ‘sex slaves’. They are genocide survivors, and for those who did not survive, they are victims.

Boys over the age of 7 are taken from their mothers and forced into ISIS training camps, where they are indoctrinated and taught to fight. Some have died fighting on ISIS’s frontlines. It has been difficult to locate the boys and rescue them.

As ISIS-controlled territory in Iraq and Syria came under aerial attack by the US-led coalition, Yazidi captives, trapped in fighters’ houses and on ISIS military bases, were reportedly among the casualties. As the ‘caliphate’ crumbled, ISIS fighters fled, taking the captured Yazidi women and children with them. Their fate and whereabouts remain unknown.

Today, I am back living in Duhok and working as a research assistant on the LSE Middle East Centre’s project ‘Documenting Yazidi Victims of ISIS‘. The project aims to build a consolidated database of Yazidi victims by age, gender, location and crime(s) suffered, using rigorous demographic techniques modelled on the methodology accepted by the International Criminal Tribunal for the former Yugoslavia. Our team will – with the consent of the survivors and their communities – create and organise data collected for use in accountability proceedings, identification of remains in mass graves, humanitarian interventions, community-building and broader advocacy. It is specifically envisaged, and is an integral aspect of the methodological planning, that the documentation project will play a significant role in achieving justice for Yazidis against the crimes committed against them by ISIS. The data will ground existing advocacy for accountability processes in national, regional and international courts and tribunals. Once courts or tribunals seize the cases, the documentation project’s data will provide reliable information of high probative value for use before various existing and future accountability processes. I am proud to be part of this effort.

For the Yazidis who have survived, most of us now live in displaced people’s camps, unfinished buildings and in rented accommodation in the Kurdish Region of Iraq. A small number have received asylum in Germany, Sweden, Canada and elsewhere. Others, in their desperation to find safety, have fled on dinghies to Greece. Some, including people I know, have drowned in the Mediterranean. A few have taken the risk and returned to Sinjar, which – though destroyed – is now under the control of the Iraqi central government. The region, littered with IEDs, is not yet safe. Mass graves holding the remains of Yazidis are regularly uncovered. There is a need for forensic preservation and analysis, as well as more generally for the reconstruction. Living with dignity in Sinjar remains a challenge.

The Yazidis continue to hope for the rescue and return of the women and children still held by ISIS. We hold out hope that some of the Yazidi men captured have survived and might also be reunited with their families. We have survived, for now, ISIS’s attempt to destroy us, but we remain a deeply traumatised community in need of support: psycho-social support, educational and livelihood initiatives, including those specifically aimed at increasing female social and economic independence, forensic documentation of mass graves, reconstruction, including infrastructure for potable water, healthcare and education – our list is long. But if I were to summarise, I would say the Yazidi community, displaced from Sinjar and desirous to return, needs three things: assured security, justice for the crimes committed against us and recognition of the genocide. The prejudices against our community must be uprooted and made to wither in the light. This requires the calling of the crime committed against us by its true name.

The morning I awoke thinking about my engagement belongs to a more innocent time, one to which Roza and I cannot return. This morning, I sit in front of my computer. On its screen are the names of thousands of Yazidis. They are categorised: killed, kidnapped, missing. I know they, like me, once woke up looking forward to the day ahead of them.

On Wednesday 16 May 2018, the LSE Middle East Centre held a discussion with Bahaa Ilyas, Roza Qaidi and Sareta Ashraph on prospects for justice and security for the Yazidis. Details of this and other past events can be found here.

Bahaa Ilyas is a Yazidi activist who has been in close contact with internally displaced people through different agencies and organisations since 2014. Currently, he is a researcher on the LSE Middle East Centre’s ‘Documenting Yazidi Victims of ISIS‘ project.

Roza Saeed Al-Qaidi is a Yazidi activist. Since ISIS’ attacks on the Yazidis in August 2014, she has been involved in humanitarian aid and has interviewed Yazidi survivors, particularly women and girls who had been sexually enslaved by ISIS fighters, on behalf of a number of different organisations.

Bad Behavior has blocked 2279 access attempts in the last 7 days.