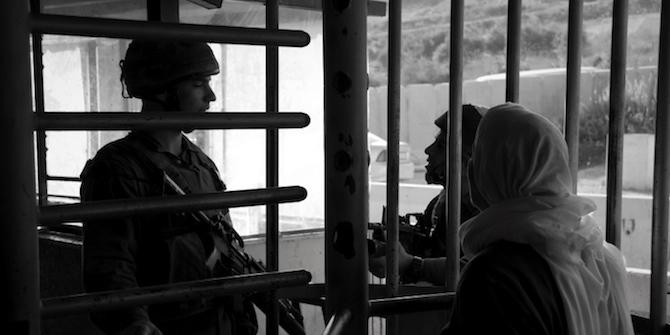 Conflicts pose threats to public health, human security and wellbeing. While more attention tends to focus on the more visible and direct impacts of conflict, such as death, disability and injury, conflicts, especially if prolonged, impact populations and subgroups in important but less visible ways; affecting the very foundations of society and posing threats to human security and wellbeing, both collectively and individually. This project aims to understand how people give meaning to, make sense of and cope with various forms of deprivation, including the traumas and impacts of conflict and military occupation in the occupied Palestinian territory (oPt). This project is a joint collaboration between the Department of International Development, Social Policy at LSE and the Department of Health and Community Health at Birzeit University in Ramallah.

In this two-year project, we will develop new metrics to assess deprivation and its links to health outcomes. By linking local understandings of deprivation and health we will re-examine and re-evaluate dominant theoretical paradigms in the social and health sciences.  We will examine multiple dimensions of deprivation under conditions of prolonged conflict in the oPt. We will identify the presence of multiple dimensions of deprivation (economic, material, nutritional and political) and its determinants, paying particular attention to geographic variation within the oPt.  We will examine the links between different forms of deprivation and health and wellbeing, focusing on less tangible and under-researched impacts of conflict, including the links between subjective and objective measures of health, and the roles of political and social determinants.

Why Deprivation and Health?

While many studies have shown the links between deprivation and negative health outcomes, the majority of evidence conceptualises deprivation in economic terms, focusing on income-deprivation or other forms of material deprivation (such as asset deprivation). Such measures of deprivation tend to focus on the individual or household and do not take into account broader conditions and living standards. Amartya Sen (2000) shows the limitations of focusing on income deprivation or a narrow view of poverty and alternatively proposes conceptualising poverty as capability deprivation, contributing to a person’s unfreedoms. The relationship between income and capability is influenced by individual and contextual characteristics that can either to enhance capacity, if resources are positively translated into enhanced capabilities, or can work to enhance disadvantage (for example where individual disadvantage like disability is coupled with contextual disadvantage). In this respect, a narrow view of poverty or deprivation solely in terms of income deprivation can camouflage the intensity of the impact of capability deprivation on people’s lives and health. In addition, relative deprivation needs to be taken into account, as relative deprivation can oftentimes yield absolute deprivation in terms of capabilities (Sen, 2000).

Sen’s conceptualisation provides a useful starting point and links to a growing body of public health literature in which relative measures of deprivation are taken into account in examining the relationship between deprivation and health, where deprivation is viewed more broadly in terms of its effect on increasing vulnerabilities or reducing adaptive capacities. Increasingly, the literature highlights the importance of rethinking relative deprivation in terms of either social comparisons or the social distance that is created or expounded by inequalities, which then negatively impacts health through various mechanisms including reducing psychosocial wellbeing, limiting access to health and social services, and reducing capacities (Sen, 2000). Some also point to the importance of taking into account subjective understandings of both deprivation and wellbeing (Mishra and Carleton, 2015).

In this study, we will meet research aims by developing and testing a multi-dimensional measure of deprivation. By integrating evidence from existing secondary data using the Palestinian Central Bureau of Statistics (PCBS) Living Conditions Survey (LCS) for the West Bank and Gaza Strip (2015) and primary qualitative data, we seek to reconceptualise deprivation and its multiple dimensions, particularly in contexts of enduring prolonged conflict. We will incorporate subjective and objective measures of deprivation to examine how deprivation affects health status. Additionally, we will incorporate both individual and spatially situated collective level assessments into our analysis in order to account for the impact of the multiple levels of deprivation as well as the interaction of these levels. Finally, in our examination of the impact of deprivation on health, we draw on a more holistic measure of health that incorporates both wellbeing and reported health status. The qualitative component of the study will develop deeper insights into understanding how Palestinians living in the oPt conceptualize and understand deprivation; the links between the various causes of deprivation, and their determinants in the context of ongoing Israeli military occupation and colonisation.

This innovative approach will contribute to the broader debate on deprivation, both substantively in terms of conceptualising the term and outlining the links between deprivation and health, and methodologically in relation to measurement. Given the dearth of literature that examines the impact of deprivation on health in contexts of enduring prolonged conflicts, findings from this study will have important implications for other conflict settings.

*This blogpost introduces the LSE Academic Collaboration project Re-Conceptualising Health in Wars and Conflicts: A New Focus on Deprivation and Suffering run in collaboration with Birzeit University, examining deprivation in the context of prolonged conflict. Weeam Hammoudeh is co-Principal Investigator in the Birzeit Research Team.

Weeam Hammoudeh is an Assistant Professor at the Institute of Community and Public Health, and formerly ACSS (Arab Council for the Social Sciences) Postdoctoral Fellow and Visiting Researcher at the Department of Social and Behavioral Sciences at Birzeit University. She is co-Principal Investigator in the Birzeit Research Team on the LSE Academic Collaboration project Re-Conceptualising Health in Wars and Conflicts: A New Focus on Deprivation and Suffering. She tweets at @Whammoudeh

Bad Behavior has blocked 405 access attempts in the last 7 days.