The idea of self-rule or autonomy for the Palestinians first appeared in the Camp David peace talks between Menachem Begin’s Israel and Anwar Sadat’s Egypt in 1978. Forty years on, an independent, sovereign Palestinian state has still not been created, in part because that concept of limited autonomy still casts a long shadow. Seth Anziska‘s meticulously-researched tome is an important corrective to the conventional historiography of the period. 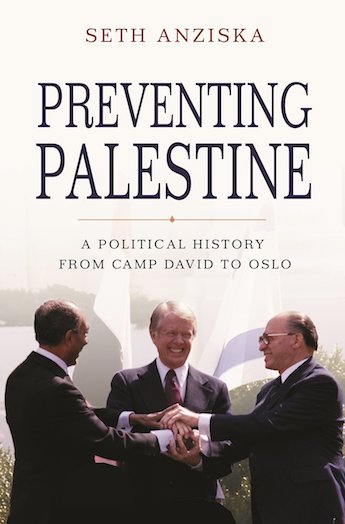 Anyone seeking to understand the conflict between Israel and the Arab world quickly realises that its history is littered with “landmark” diplomatic events that range between dismal failure or partial success. Peace initiatives that succeed completely have been the exception, not the rule. Seth Anziska’s contribution is to re-examine and link two key moments and explain clearly how the continuity between them has prevented the creation of a state of Palestine.

The Camp David agreement between Israel and Egypt, brokered by Jimmy Carter in 1978 and leading to the Israel-Egyptian peace treaty of 1979, is still highly relevant, he shows. It laid the conceptual basis for the Oslo accord of 1993 – whose twenty-fifth anniversary falls this month – and which still underwrites the asymmetrical deadlock between Israel and the Palestinians. If Preventing Palestine revisits familiar territory – albeit enriched by an impressive array of recently declassified documents, secondary sources and interviews – it illuminates the long view and the big picture. It is a richly detailed account of failure – the “genealogy of a non-event” in the author’s memorable phrase.

Anziska’s starting point is the autonomy plan that was part of the Camp David process. Menachem Begin, Israel’s newly-elected Likud prime minister, understood that Egyptian President Anwar Sadat was interested, above all else, in regaining the Sinai peninsula, captured by Israel in 1967. Arab solidarity required Cairo to pay lip service to the Palestinian cause and that was done by holding talks about “self-rule” for what Begin called “the Arab inhabitants of Judea and Samaria,” drawing on “an older colonial discourse of limited self-determination for native inhabitants.” In this self-serving view Palestinians could enjoy limited rights – but not over the territory they inhabited. That was a crucial – and so far, lasting – distinction.

The Palestinians, who were not represented, excoriated and shunned Sadat along with the rest of the Arab world, dismissing what they called “power to collect garbage and exterminate mosquitoes”. The US role, as well as the substance of the negotiations, “actively undermined the prospects of a solution to the Palestinian question.”

Carter’s administration included individuals who opposed Henry Kissinger’s 1975 ban on the PLO, while the new president was “certainly thinking beyond the existing script” of Middle East diplomacy. Fatefully, however, Israel was cast firmly as a strategic ally and the PLO as a Soviet proxy. Washington accepted Israel’s assertion that building settlements in occupied territory would not be an impediment to a peace agreement and that Israel should retain security control. The journalist Amnon Kapeliouk was right to observe at the time that South African Bantustans had greater powers than what was being offered to the Palestinians.

Anziska incorporates the 1982 Lebanon war into his narrative – not only chronologically but also thematically ­– framing it as an Israeli effort, led by defence minister Ariel Sharon, to “vanquish the Palestinians, diplomatically and militarily,” and to find a docile alternative to the PLO. The creation of a new “civil administration” in the West Bank and Gaza Strip and the promotion of the collaborationist Village Leagues were part of the same failed approach. But Israel’s “war of choice,” and especially the Sabra and Shatila massacre of Palestinians by Israel’s Phalangist allies, was damaging to Israel’s global image, especially amongst liberal American Jews. It undercut “the entire edifice upon which a carefully cultivated ethos of defensive Zionism had been resting,” as the author puts it.

Over time, the Palestinians benefited, moving closer to demanding their own state, though any progress was distracted in the mid-1980s by “highly visible and egregious acts of terror” like the murder of an elderly, wheelchair-bound American Jew on the Achille Lauro cruise ship. The eruption of the first intifada in 1987, the following year’s disengagement by King Hussein (killing off the so-called “Jordanian option”) and the Palestinian declaration of independence all marked significant changes. Together they brought formal endorsement of the two-state solution and led finally to US dialogue with the PLO. By the end of the 1980s “the notion that a state of Palestine could exist side by side with a state of Israel, near heresy in the 1970s, had emerged as the preferred Palestinian position.”

Yet the post-1991 Madrid talks between Israel and the Palestinians were overshadowed by the persistent autonomy model. “Interim self-government arrangements” did not include Israeli surrender of the occupied territories while the situation on the ground continued to deteriorate. In 1993 the secret Oslo channel looked more hopeful: advances included the PLO’s recognition of Israel and Israeli recognition of the PLO as well as the transfer of territory in Gaza and Jericho to its direct control – a symbolic though very partial “return.” But that produced only an interim, five-year agreement with the ever-thorny “final status” issues indefinitely deferred. The Oslo II agreement in 1995 provided “the vestiges of statehood without actual content,” which is more or less where things still stand. In recent years Israel leaders have spoken of agreeing to “a state minus” and “autonomy on steroids” for the Palestinians. The echoes of Begin’s legacy could not be clearer. Anziska has written a thoughtful and rigorous work which creatively adjusts the conventional periodization of the history of the conflict. It will benefit anyone trying to follow the path to today’s bleak impasse.

Bad Behavior has blocked 1872 access attempts in the last 7 days.