It has been a busy few weeks in the Middle East. While the murder of Saudi journalist Jamal Khashoggi has dominated the headlines, the simmering dispute over US President Donald Trump’s decision to recognise Jerusalem as the capital of Israel will just not go away.

On 18 October, the US announced that it would merge its consulate in Jerusalem, which has long overseen American ties to the Palestinians, with its Embassy in Jerusalem. The head of the consulate, which traditionally dealt with Palestinian affairs, will return to Washington. Instead, David Friedman, US Ambassador to Israel, will oversee diplomatic ties with the Palestinians. The State Department has not explained the reasoning behind the sudden merger, other than to claim that it was ‘driven by our global efforts to improve the efficiency and effectiveness of our operations’.

But what appears to be a seemingly innocuous administrative measure is, in fact, a big deal that could have fatal consequences for any rapprochement between the Trump administration and the Palestinian leadership, as it will have a chilling effect on their ability to communicate freely with the US government.

Not only does the merging of the consulate with the US embassy send a clear signal to the Palestinians that only Israel has sovereignty over Jerusalem, but it will make Palestinian officials suspicious of communicating with the State Department since all lines of official communication will now have to pass through the office of Ambassador Friedman – a strong backer of Israeli settlements and of the right-wing Israeli government. A case in point came as recently as 17 October, when Mr Friedman hit the headlines after he made an official visit to a West Bank settlement, a move which a prominent American pro-peace group denounced as ‘crossing a red line’.

Why would the US want to further downgrade its representation to the Palestinians, when Trump’s son-in-law Jared Kushner is supposedly working behind-the-scenes on the much touted ‘deal of the century’?

The timing of the announcement provides a clue: a looming court case that Palestine filed against the US at the International Court of Justice (ICJ) in late September that appears to have completely blindsided the administration. Palestine’s lawyers cleverly gave the US notice of the existence of a dispute, pursuant to the Optional Protocol to the Vienna Convention on Diplomatic Relations (VCDR) on 4 July, knowing full well that it was a public holiday when no one would be working at the State Department.

President Trump’s decision to recognise Jerusalem as the capital of Israel provoked a strong backlash from the international community, including from close US allies, when it was announced on 6 December 2017. Undeterred, the Trump administration vetoed a draft UN Security Council resolution condemning the recognition that was supported by all of its allies, and then went ahead with its embassy move on 14 May amidst bloody protests in Gaza.

The Palestinian leadership has been unusually preoccupied as a result, waging a diplomatic offensive to challenge the US embassy move in whatever international forum will accept them. The ICJ is a good place to challenge the US, as it is one of the few institutions that recognises the sovereign equality of states, no matter how large or small, powerful or weak, they may be.

Palestine’s move to institute proceedings against the US at the ICJ has upset important figures in the Trump administration, not least John Bolton, its National Security Advisor.

In September, the US retaliated against the Palestinians by announcing the closure of the office of the Palestine Liberation Organisation (PLO) in Washington D.C. and sent Husam Zomlot, its head of mission, packing to Ramallah. Zomlot has since been appointed Palestine’s top diplomat to Britain.

The closure of the PLO’s mission in Washington and the downgrading of its representation to the Palestinians in Jerusalem means the US can now make the argument that despite being a party to the VCDR, it does not have diplomatic relations with Palestine, and therefore the treaty does not apply.

It is, however, unlikely to make much difference to the case Palestine has filed at the ICJ, and may even backfire, given that the US evidently had diplomatic relations with officials from the State of Palestine before it filed the case.

While the US has never recognised Palestine as a state, it has had diplomatic relations with the PLO since the late 1980s after the organisation signalled a willingness to abandon armed struggle and recognise Israel. Under President Bill Clinton, US–PLO relations drew much closer. PLO Chairman Yasser Arafat was a regular visitor to the White House; the Clinton administration bore witness to the Oslo Accords; and President Clinton even visited the Gaza Strip to witness the opening of the Strip’s only (and no longer functioning) airport.

President Mahmoud Abbas and other senior Palestinian officials were also frequent guests at the White House during the Bush and Obama administrations, and senior US officials frequently visited Ramallah even after the UN had recognised Palestine as a non-member observer state in November 2012. When President Obama visited Ramallah in March 2013, he commended ‘President Abbas and his Prime Minister, Salam Fayyad, for the progress that they’ve made in building the institutions of a Palestinian state’.

Significantly, the Obama administration continued to meet Palestinian officials from the President’s Office, the Negotiation Affairs Department and the Foreign Ministry, even after Palestine had acceded to the VCDR on 2 April 2 2014. Mr Abbas met President Trump at the White House in May 2017, and three weeks later, the visit was reciprocated in Bethlehem. The Trump administration continued to engage with senior Palestinian officials until 6 December 2017, when ties were cut off after the recognition of Jerusalem.

The administration’s moves since then, including its decision to downgrade its relations with the Palestinians, have only put more daylight between it and the Palestinians. The gulf will be widened when the ICJ hears Palestine’s case. Whether or not the gambit to merge the consulate has any material impact on the outcome of the case, the result will be the same: A lasting peace will remain out of reach.

Victor Kattan is Senior Research Fellow of the Middle East Institute of the National University of Singapore and Associate Fellow of NUS Law. He tweets at @VictorKattan 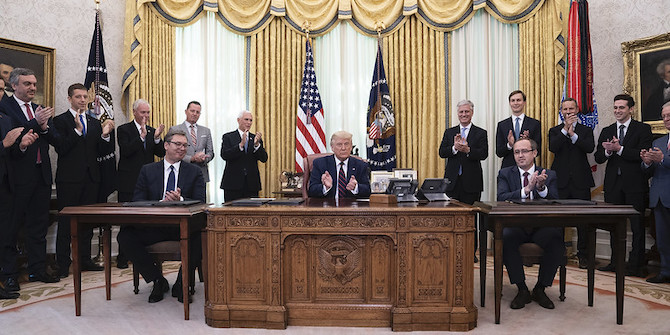 Bad Behavior has blocked 3545 access attempts in the last 7 days.