Today, Lebanon hosts more than one million Syrian refugees. Despite this, they are considered temporary guests (Nazihin) rather than refugees. In this context, the Lebanese government has delegated key responsibilities in refugee assistance to supranational organisations.

The European Union (EU) has been the leading donor in Lebanon in the context of Syrians’ displacement, and has increased its cooperation on refugee governance with the Lebanese government since 2012. Still, people within Lebanese policy spheres have disputed some narratives and practices that lie at the heart of the EU’s approach towards external refugee governance.

Crucial to this approach is the politics of resilience building that is refined in several policy documents;  the EU frames “resilience” as the core “objective” underlying “its development and humanitarian assistance.” It defines resilience as the capacity of individuals, communities and regions to recover from shocks without threatening “long-term development.”

For both displaced and host communities in Lebanon, the EU connected its resilience building strategy with stabilisation and allocated more than €1 billion to help the country bounce back. The EU also increased cooperation with the Lebanese government through a partnership in which the logic of mutual benefits and incentives is key.  High-level meetings stress the mutual benefits that the EU and Lebanon garner in their cooperation across different policy fields, namely refugee aid, counter-terrorism and trade facilitation. By 2016, this cooperation led to the adoption of the EU-Lebanon compact, which integrates refugee aid with the country’s development agenda. The idea here is that the refugee issue can evolve into an opportunity to tackle domestic challenges.

Notwithstanding this partnership, Lebanese policy makers have questioned certain aspects of the EU’s approach to refugee governance. Some Lebanese officials have criticised the EU’s resilience building approach for placing a disproportionate burden on Syria’s neighbouring states (Lebanon, Jordan, Egypt, Iraq and Turkey), claiming that the latter have taken in about 5.5 million Syrian refugees whereas EU member states have been reluctant to accept their fair share of migrants and refugees. In the project I have conducted on the EU’s role in the governance of displacement [1] I mapped how the Lebanese government has contested the EU’s policy solutions for Lebanon’s refugee challenge, doubting in some cases their relevance to the Lebanese context. While the EU portrays its actions as resilience building, some Lebanese policy makers claim this approach shifts the burden from the broader international community to Syria’s neighbouring states in particular, through the provision of development aid.  According to some of my interviewees, the EU-Turkish agreement negotiated at the peak of the so-called ‘refugee crisis’ in Europe set the tone for the EU’s policy solutions that address the refugee challenges in Syria’s neighbouring states.

Recently, the issue of Syrian refugees’ return home has brought these competing narratives of resilience building to the forefront of the debate. Since 2016, political factions in Lebanon have come together to call for refugees’ prompt return to Syria. In response to this, the EU has stressed the importance of refugees’ voluntary return when conditions in Syria are conducive to such a scenario. As an interim solution for Lebanon, the EU emphasises the strategies of economic stabilisation and resilience building through development aid, which have been the source of some policy clashes between EU and Lebanese officials in high-level meetings. In some instances, Lebanese policy makers criticised the EU’s search for more sustainable solutions to support refugee communities “close to home”, such as creating more employment opportunities. According to some, this strategy undermines Lebanon’s national employment laws and its sovereignty.

In the context of Syrian refugees’ displacement, looking at competing framings of resilience building between Lebanon and the EU highlights the ways in which refugee politics is a conflictual terrain that feeds on disputed spatialities, meanings, and manifestations of power. Though this piece only addresses the Lebanese case, contested narratives hold wider implications.  In the Middle East, the EU has played a key role in trade reform and migration management.  Still, before the outbreak of armed conflict in Syria, the EU had not given enough importance to refugee aid and protection, even though the region has been a key host to many refugee populations long before the organisation’s inception.  Displacement from Syria has been pivotal for refugee governance insofar as it challenged the balance of power in negotiations that take place between key Arab host states and the EU.

Looking at refugee governance as a field of contested meanings helps us understand the ways in which the EU’s emphasis on aid as an external strategy to tackle the refugee challenge may clash with local interpretations of resilience and burden sharing. It also challenges the assumption that Arab host states are merely recipients of policy prescriptions and lack agency. Rather, the illustrated cases demonstrate ways in which Lebanon disputes the EU’s approach. While the EU proposes forms of refugee assistance as a pragmatic solution to displacement, some local policy makers portray these solutions as a mismatch to their realities on the ground.

Moreover, contestation is used as a foreign policy tool in states that have yet to develop a rights-based refugee regime. Even though such states are reliant on external refugee aid, they may draw on contestatory narratives to downplay their obligations vis-à-vis refugee rights in the global refugee regime. Amid broader disputes on refugee burden sharing, some officials in Syria’s neighbouring states have questioned their obligations towards refugee law, referring to limited global solidarity, including the EU’s stance. In that regard, the argument “enough is enough”, to some extent eclipsed the discourse on refugee rights. It exemplifies the ways in which questioning the EU’s politics of resilience building is a strategy used to advance state-centric goals at the expense of refugee protection needs.

The title of this blog post is inspired by Jeffrey L. Pressman and Aaron Wildavsky’s book title Implementation: How Great Expectations in Washington are Dashed in Oakland (Berkeley, University of California Press), 1973.

This post and others in the series are based on presentations held during a conference organised by the LSE Middle East Centre on 7–8 March 2019, titled ‘Between Institutional Resilience to the Syrian Refugee Crisis and the Resilience of Syrian Refugees’.

Tamirace Fakhoury is is Associate Professor of political science at the Lebanese American University (LAU), and the director of the Institute for Social Justice and Conflict Resolution (ISJCR). She is working on a project that tackles the European Union’s role in the polycentric governance of displacement at the Käte Hamburger Kolleg/Centre for Global Cooperation Research, Germany. She tweets at @tamyfakhoury 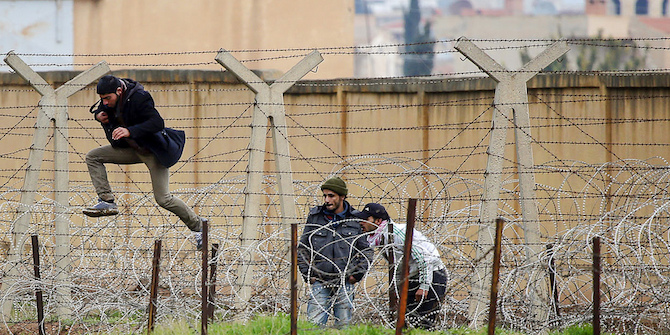 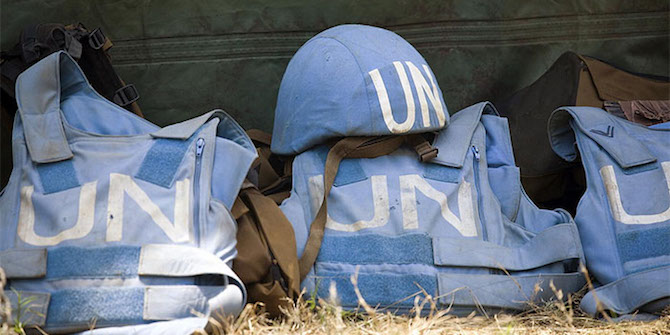 Bad Behavior has blocked 1177 access attempts in the last 7 days.