Earlier this month, Yuting Wang came to LSE to present her research on Chinese Muslims in Dubai. In a time of rising Chinese influence in the Gulf, and mass persecution of Muslims in China, this community is simultaneously precarious and of huge strategic importance to Beijing. This piece was originally published on the LSE Religion and Global Society blog.

On 30 May 2019, as the holy month of Ramadan was nearing its end, Mr. Li Xuhang, the newly appointed Chinese Consul General of Dubai, made his debut public appearance since assuming the position four days earlier. At the annual Ramadan Iftar banquet organised by the Consulate General of China in Dubai at the Grand Hyatt Hotel by the Dubai Creek, Mr. Li delivered his first public speech in Dubai, addressing more than 400 attendees who included among them representatives of the Chinese expatriate community, Emirati dignitaries, as well as friends and business associates of various nationalities.

Beginning by thanking the hospitality of the UAE government and the warm welcome he had received from the Chinese community in Dubai, Li offered an eloquent account of the history between China and the Middle East, especially the Arabian Gulf. In particular, he elaborated on the meaning of Ramadan to Muslims, highlighting the importance of celebrating the occasion as a way to show respect to the host society and to reinforce solidarity with fellow Muslim brothers and sisters in the overseas Chinese community in Dubai. He reiterated the indispensable roles of overseas Chinese Muslims from different ethnic backgrounds (ge minzu de musilin qiaomin 各民族的穆斯林僑民) in facilitating bilateral relations between China and the UAE. He said,

I hope that all overseas Chinese continue to carry forward the tradition of patriotism and love of the homeland, be a contributor to the development and progress of the motherland, a staunch defender of national sovereignty and unity, a promoter of pragmatic cooperation between the two countries, a communicator of Chinese culture, and make due contributions to the realisation of Two Century Goals and the Chinese Dream of the great rejuvenation of the Chinese nation.

The term ‘Qiaomin (僑民),’ is closely associated with another term, ‘Huaqiao (華僑),’ which finds its equivalence in the English term ‘Overseas Chinese.’ The waves of Chinese emigration since the nineteenth century have provoked a prolonged debate on terminology with far reaching political, economic, social, and cultural connotations. Scholars have used different terms hoping to capture the implications of shifting political relationships between China and the receiving countries of Chinese emigrants, the multifaceted connections between Chinese immigrants and their extended families back home, and the complex emotional ties between Chinese immigrants and their homeland, whether imagined or real. According to Gungwu Wang in China and the Chinese Overseas, the term ‘Qiaomin’ or ‘Huaqiao’ suggests the existence of ‘a single community with a considerable solidarity’ regardless of the spatial and temporal distance created as a result of migration.

While this solidarity is largely maintained through shared cultural traditions, emotions and memories, it is inevitably tied to the Chinese state and plays an increasingly central role in China’s grand rejuvenation project of the twenty-first century. Although scholars have warned that using ‘Qiaomin’ or ‘Huaqiao’ to refer to all Chinese living abroad is ahistorical and could lead to dangerous consequences (again, see Gungwu Wang’s book), the term is endorsed by Chinese authorities and has effectively replaced all other categories in public discourse. Using ‘Qiaomin’ to refer to China’s Muslim minorities living outside China certainly reveals a strong political undertone and the multinational characteristic of the Chinese state. Since the affairs of overseas Chinese are managed through five government agencies and are vital to the missions of China’s political apparatus, China’s Muslim minorities of various ethnic backgrounds are not only expected to facilitate the realisation of President Xi’s ‘Chinese dream’ wherever they are, but are also closely monitored at various levels.

In the last ten years, the Chinese Consulate General in Dubai has made an increasing effort to engage with China’s Muslim expatriates living in the city and the UAE as a whole through both formal and informal channels. The annual Ramadan Iftar banquet organised by the Chinese Consulate General and sponsored by various provincial trade associations is one of the key programs that attest to the importance of China’s Muslim minorities in the state’s mission of creating a united front within the largest overseas Chinese community in the Middle East and North African region.

The first annual Ramadan Iftar banquet was held in 2010. The gathering was organised by Minzu Zongjiao Shiwu Weiyuanhui (民族宗教事務委員會) – the Committee of National and Religious Affairs – under the banner of UAE’s Qiaolian (僑聯), or the Federation of Overseas Chinese of the UAE. This committee does not exist in any other Qiaolian chapter around the world. Dr. Ma Xuezhong, the key initiator of the committee and one of the leaders of the Chinese Muslim community in Dubai, firmly supports the principle of ‘Ai Guo Ai Jiao,’ or ‘love our country and love our religion.’ He believes that Dubai’s Chinese Muslim expatriates hold a unique position in bridging the gap between China and the UAE, and ultimately bringing China and the Arab world together.

Since the inaugural banquet in Mazaya Restaurant, a modest family restaurant located off Sheikh Zayed Road, with about 150 attendees, the event has grown both in grandeur and influence. The 2019 celebration was the largest so far, as mentioned above it was held in the Grand Hyatt and attended by over 400 guests. Ramadan is a strategic period of time for the Chinese state to amend its image in the Arab world, which has been tarnished by the growing outrage toward China’s treatment of religious and ethnic minorities on its northwestern border and complicated by the ongoing mass protests in Hong Kong.

Chinese Muslims in Dubai are indeed playing an indispensable role in strengthening China-UAE relations through their work as policy/legal consultants, business brokers, and philanthropists. Yet, they are also well aware of the precarious situation of being simultaneously Muslim and Chinese in an Arab Muslim society as China’s grip of its religious minorities further tightens. They must navigate visible and latent boundaries, political and religious, in order to fit in the complicated networks weaved together as the Belt and Road Initiative pushes forward. Demonstrating their patriotism and political loyalty is not only a prerequisite for prosperity, but also a strategy for survival in the diaspora. 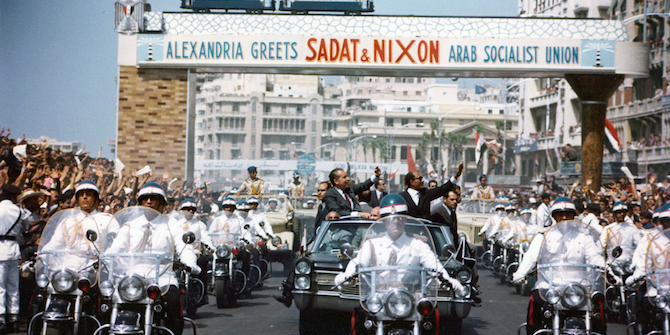 Fortress America in the Middle East: Academic Freedom at the American University in Cairo