Music has always been an important tool in mobilising the masses, particularly during times of war, with the Syrian conflict no exception. This piece looks at the musical propaganda of three of the Syrian Civil War’s major non-state actors, namely the Partiya Yekîtiya Demokrat‎ (‘Democratic Union Party’, usually referred to by its Kurdish acronym, PYD), Hezbollah, and Daesh. I share a few observations about the role that music has played in the political sphere of the conflict.

The PYD and Music

The Kurds do not have a nation-state, and one important element in the continuity of Kurdish identity is music. Since its inception, the PYD and its predecessor, the PKK, have been aware of the role of music as a tool to disseminate ideology. Both followers and militants themselves engage in musical production. Since the 1980s, PKK-linked radio and TV channels broadcast the ideological discourse of the organisation, usually through the medium of songs. Although folk music has historically been the dominant form, Western genres such as rap or rock are now also employed. These songs are also broadcast in Western media, often accompanied by images of female Kurdish militants holding weapons while singing. The organisation consciously promotes this combination of imagery and music to differentiate itself from (male-dominated) Islamist groups.

In general, the songs employ a set of recognisable themes. The most common theme is praise for notions of Kurdishness. Lyrics are often derived from poems that emphasise Kurdish identity, written by traditional Kurdish poets. This theme is unique to the PYD among the groups fighting in the Syrian Civil War, with frequent reference made to the Kurdish homeland, which the PYD attests is under colonial occupation.

Other themes crop up repeatedly, such as songs commemorating and celebrating the war’s individual battles. The PYD/PKK in particular have many songs about their successful resistance in Kobanî/Ayn al-Arab, against Daesh’s assault on the town. Finally, Kurdish songs are also written in praise of the group’s ‘martyrs’, as well as the organisation’s imprisoned spiritual leader, Abdullah Öcalan.

The Shi’a community in the Arab Middle East, which Hezbollah claims to represent, is another of the region’s ethno-religious groups without its own nation-state. In some respects, the use of music by Hezbollah resembles that of the PYD/PKK. A similar condition of ‘statelessness’ has put music at the forefront of identity formation for Hezbollah, yet there are also differences. First, a long-lasting ban on the Kurdish language in Turkey made singing in Kurdish highly political in itself for Kurds, but for Arab Shi’a, it is not the singing itself but the content that matters. Secondly, as a religious movement with important links to the Iranian regime, any music created by Hezbollah must fall within the limitations imposed by orthodox readings of Shi’a Islam and specifically the Iranian government’s understanding of it. These limitations include a ban on female voices in music and an opposition to Western musical forms.

In the context of the Syrian Civil War, the themes of Hezbollah’s music mirror those of the PYD. The battles and victories of war are common themes. The most famous such song is ‘A’lan Nasrek be Yabroud’ (‘Announce the Victory of Yabroud’) by Ali Bereket. Similar to the Kobanî/Ayn al-Arab songs of the PYD, Bereket’s song is focused on militaristic success, praising Hezbollah’s previous victories in Syria in the battles of Al-Qusayr, Al-Nabek, and most importantly Yabroud.

Hezbollah songs emphasising the bravery and courage of militants are also abundant. While this theme is shared between Hezbollah and the PYD, the heroic figure of Öcalan is replaced by Hassan Nasrallah in Hezbollah songs. Themes also differ between these two camps. Hezbollah composes more songs on the theme of martyrdom, a tradition with a long history in Shi’a Islam. Another important theme in Hezbollah songs is Palestine. Employing this theme, Hezbollah salutes its greatest victory, the 2006 war, and by comparing its enemies in the Syrian Civil War to an ‘army of Jews’, it increases its popularity in the Middle East, where anti-Israel rhetoric is widespread

For Daesh, the most important type of music is the nasheed. In this musical form, a tambourine is the only instrument used, many references are made to the Qur’an, and solely male voices are allowed. Nasheeds are so common among both Shia and Sunni Islamist groups engaged in the war that they can be thought of as the soundtrack to the Syrian Civil War. One trait that separates nasheeds from the music of Hezbollah and the Kurdish movement is the plurality of the languages in which their lyrics are written: these include Arabic, Pashto, Bosnian, Kurdish, Flemish, German, and English. There are also various combinations of nasheeds with different musical genres. For example, Deso Dogg, a famous rapper from Germany who later joined Daesh and was killed in Syria, combined the classic nasheed form with hip hop.

The nasheeds of Daesh share themes with the previous examples, such as bravery, mourning, and eulogy. Like Hezbollah, Daesh also has songs directed against Israel; however, they focus more on the religious content of the lyrics and quote directly from the Qur’an.

Almost all nasheeds makes reference to an Islamic golden age. Like the PYD songs that declare their goal of saving Kurdistan from colonialists, the nasheeds of Daesh declare their aim as restoring the ‘glorious past of Islam’.

To overcome the faith-related limitations that define the musical forms, producers of Daesh songs have used various tactics, such as adding sounds of swords and guns to the music. Special attention is paid to the online circulation of music videos. As of 2019, Daesh has lost most of its physical presence in Syria, but before that, while both Hezbollah and the PYD had more representatives and institutions outside of Syria, Daesh’s network was relatively narrow. Thus, they used the Internet to reach and attract masses and disseminate their political views. Many platforms, including YouTube, where music videos are shared and open for comment, acted as forums for them.

Not all the musical battles of the Syrian Civil War are being fought by these three camps alone. Ibrahim Qashoush must be remembered in any discussion of the role of music in Syria. He was not bound to any political organisation. Three days after he led crowds in Hama in singing ‘Yalla Erhal Ya Bashar’ (‘Get Out, Bashar’, addressed to the president of Syria) in July 2011, his body was found in the Asi River, his throat having been cut. His murder represents the first bullet fired in the battle of the music of the Syrian Civil War, but it was not to be the last.

Agah Hazir is a visiting fellow at the Center for International Studies, LSE. He received his PhD in International Relations from the Middle East Technical University, Turkey, in 2015. His current research focuses on the Turkish and Iranian states as transnational religious actors and explores how their affiliated religious institutions operate in the UK. He tweets at @agahhazir 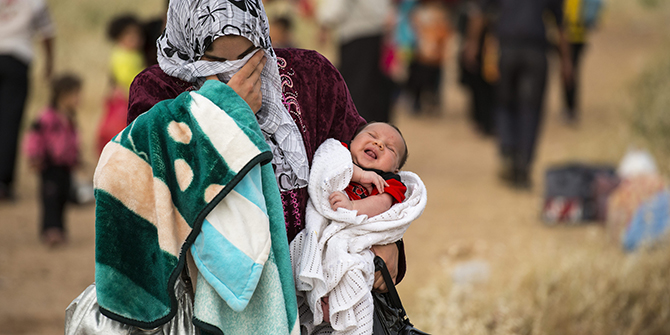 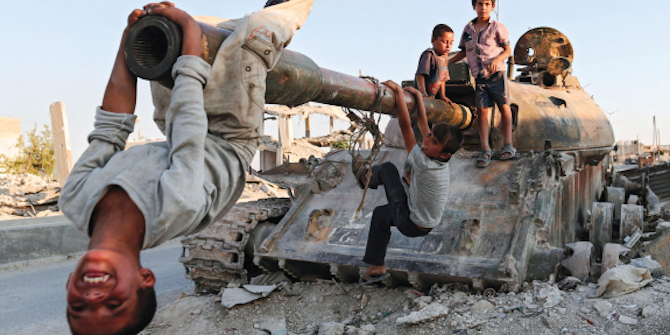