Demands for the expulsion of US troops following the killing of Iranian general Qassem Soleimani, have scaled down considerably since the initial strident calls. What started as high theatrics in parliament demanding an end to US presence, ended with a typical Iraqi fudge in that parliament passed a resolution requiring the government to cancel the request for global coalition support made in 2014, and for it to work towards ending the presence of all foreign troops. These were further rolled back as reports emerged that the government’s vision of implementing the withdrawal of foreign forces was for the withdrawal of combat forces only and did not include those conducting training and logistical support. Threats of US sanctions have undoubtedly played a role in deflating the illusions of power, especially by those in the axis of resistance, and contributed to this climbdown.

Iraq’s economy is not only vulnerable to US sanctions, but to any disengagement from the US dollar-based global financial and economic system. In fact, the US could affect far worse damage to Iraq than it did to Iran without the need to implement sanctions, let alone sanctions that would ‘make Iranian sanctions seem somewhat tame’. This vulnerability stems from the failures of successive Iraqi administrations from 2003 to reconstruct the country following decades of conflict, or to create the foundations for a diversified economy driven by the private sector, and not by the state. Instead, successive administrations have deepened the country’s dependence on oil, pursued policies that fostered a structural imbalance between the government’s current and investment expenditures, in which the public sector consumed an ever-increasing share of government revenues. The sole dependence on oil income for these revenues, and the dreadful twins of a dominant public sector and stunted private sector, are the primary reasons why the country is vulnerable to external shocks.[1]

The extent of the damage to the Iraqi economy would depend on the three broad categories of a US response to a hostile Iraq. The first category would be the imposition of primary US sanctions, and secondary sanctions on non-US entities that conduct commercial or financial dealings with Iraq. Their effects would be along the lines to those suffered by Iran due to the imposition in 2018 of similar US sanctions. For Iran, these included a major drop in oil exports, a severe economic contraction, a significant drop in the value of the currency, a substantial rise in inflation, a lowering of living standards, and a rise in unemployment especially among the youth and the most vulnerable segments of society.

However, the consequences for Iraq would be on a much worse scale than those suffered by Iran. Firstly, because oil exports constitute the bulk of the Iraqi budget’s revenues (about 90 percent of the 2019 budget) unlike those for Iran’s budget (about 30 percent of its fiscal 2019–20 budget). The loss of this income for Iraq would severely restrict the government’s ability to pay for salaries and pensions, social security, goods and services, in addition to reducing any funds available for the reconstruction of the country, the development of its oil sector or the development of its power generation.

Secondly, Iraq depends almost completely on imports for its consumption of goods and services, unlike Iran which has a well-diversified economy, and a more developed industrial, agricultural and financial sectors. Iraq’s small industrial and agricultural sectors cannot meet even a small percentage of its domestic demand, while its under-developed financial sector cannot provide the financing for the development of these two sectors.

Thirdly, Iraq’s cash-reliant economy depends on access to physical USD notes for it to function. Such a disruption in the supply of USD notes would raise the price of the USD against the IQD, and with it a rise in the value of imported goods. In 2015 the country felt some of these effects due to a restriction in the supply of USD notes from the US Federal Reserve as a result of the US Treasury’s concerns that sanctioned entities (Iran & Daesh) had access to these notes. Any effects of a sizeable loss of access to USD notes would be significantly worse than in 2015. Making things worse is that Iraq cannot access USD notes from a third country, unlike Iran, whose need for notes is met through Iraq.

The second category of US responses would be the loss of waivers for the purchase of Iranian gas, which presents Iraq with a Sophie’s choice. Continue with the purchase of Iranian gas and suffer the consequences of US secondary sanctions, which would be only marginally less painful than any possible imposition of full sanctions, discussed earlier. Or, discontinue buying Iranian gas, lose about a third of Iraq’s domestic power supply and enrage a population that is already incensed over a chronic inadequate supply of power. A less discussed point is that these waivers were granted on the conditions that Iraq develops a credible plan to reduce its dependence on Iranian gas, and in the long term end those imports. The US could still grant these waivers, but impose more stringent conditions on plans to reduce dependence and a tougher monitoring regime with associated penalties for failures in making progress.

The third category, and the most likely US reaction, would be to gradually end its treatment of Iraq as a close ally and therefore subject it to increased US treasury scrutiny of its financial system, which would negatively affect the functioning of the Iraqi Central Bank and the banking system. The most obvious result would be a disruption of Iraq’s cash-heavy economy, which relies on the access of physical USD notes for the conduct of commercial and financial transactions as discussed earlier.

In Leonard Wibberley’s satirical cold war novel The Mouse That Roared, the fictional Duchy of Grand Fenwick declare war on the US and find, by accident, that they ‘sort of win’. However, whether by accident or design, Iraq cannot expect any sort of victory from a conflict or strained relationship with the US.

[1] An upcoming piece by the author examines the structural imbalances in the economy as an inevitable consequence of successive post-2003 political system, i.e, the ‘Muhasasa Ta’ifia’. This imbalance was first explored here and subsequently in a series of tweets.

Ahmed Tabaqchali is Chief Investment Officer (CIO) of AFC Iraq Fund and and Assistant Professor at the Institute of Regional and International Studies (IRIS) at the American University of Iraq, Sulaimani (AUIS). He tweets @AMTabaqchali 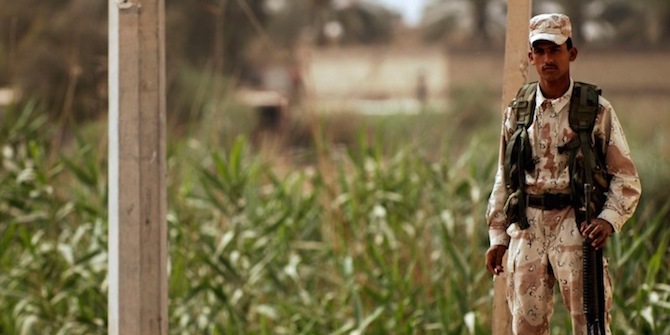