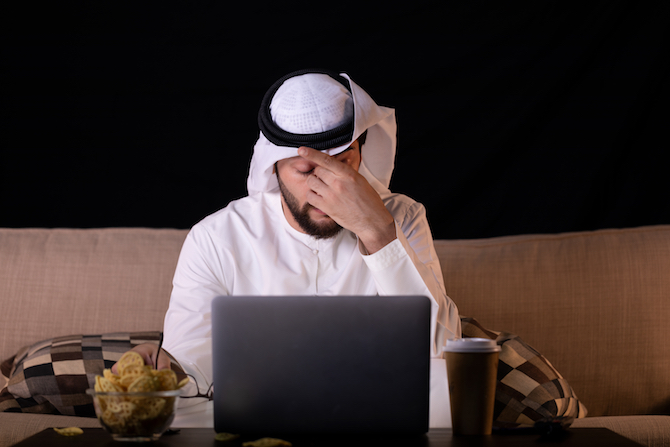 Who bears the fashla? Source: Shutterstock

Fashla, or fisheela, is one of a number of Arabic words with many culturally grounded meanings embedded into it. But in its most basic sense, fashla is ‘embarrassment’. It is one of those intimidating terms inherently ingrained in (Arab) Gulf cultures that are excessively concerned with the national image – the right image – as a collective.  Therefore, fashla always has an audience; abstract people.

Today, fashla has transcended its original sociocultural context and has become relevant in politics.  Gulf countries’ interest in improving their image abroad has increased state expectations of their citizens and subsequently emphasised citizens’ role as image-makers. Diversifying the economy through attracting foreign investment in what is becoming an economically competitive region is one of the main motivations for this new-found interest in image-making. Additionally, social media has allowed citizens to engage in personal image-making that the state necessarily sees as either conflicting or compliant with the national image at large as Gulf citizens are not afforded the choice to separate their identity from that of the state.

Hostage to an extreme culture of performative propriety, Khaleejis are frequently reminded that they are ‘ambassadors’ of their countries – as two articles have stiffly put it, here and here – and must therefore maintain an image of social respectability and decorum.

The audience for the aforementioned dicta is, of course, the ‘foreigner’. The fundamental problem with this line of thinking is twofold: first, in Gulf countries (particularly the UAE, Qatar and Kuwait) where ‘foreigners’ outnumber citizens, there seems to be little concern about performing to that large audience, who are often witnesses to, and reporters of many violations, such as ones affecting migrant labour. It is thus rather baffling that this persistent call to performative propriety disregards the scrutinising gaze of foreign residents more intimately familiar with Khaleejis in their habitat. Second, when Gulf states draw the attention of Western media due to internal or external controversies, they usually end up in unflattering headlines that go contrary to their image-making efforts. Yet Gulf states do not consider such headlines an extension of the fashla they bequeath unto their citizens. Why then does the burden fall squarely on citizens’ shoulders to single-handedly polish the collective image of the state and its people?

The emphasis on projecting a positive state image is limited to certain settings. Citizen interactions on social media can depict a counterproductive, even injurious image to the state. These social media exchanges trigger a collective sense of national pride that propel citizens to support the state. This trend seems to be driven by state signalling that deem citizen neutrality on issues related to the state as an act of treason in Qatar, Saudi Arabia and Bahrain. Functions on social media, such as the ability to translate tweets, can allow wider audiences to understand the content of these interactions, some of which may contain abusive language directed at individuals or organisations critical of Gulf states. Thus, an unresolved tension emerges between the collective responsibility to defend the state and the individual responsibility to project a positive image of the state to overseas audiences.

The responsibility placed on citizens to partake in image-making is not gender neutral, however. It is women who bear most of the burden to uphold the state’s ‘reputation’. Gulf nationalisms have constructed and functionalised women as pious, invisible subjects. Before social media allowed citizens to engage in personal image-making, such a construction of Khaleeji femininity was enforced through social mechanisms that resulted in limiting women access to public spaces and discourses which likely contributed to keeping them hidden from sight for a long time. As more women share images and snippets of their lives on social media, they gradually destabilise the symbolic construction of Khaleeji women as the embodiment of a pious nation. On the other hand, Gulf states undertaking modernisation efforts allow women more visibility to showcase state-supported empowerment. To take advantage of this latitude, however, women must walk a fine line between fulfilling the progressive image-making aspirations of the state while navigating conservative social norms at home.

Because Khaleeji women cannot be abstracted from the family and the state, deviations from acceptable social norms regularly stir debates between a majority that believes those women cause damage to the state’s reputation, and a growing minority that defends the rights of these women to autonomy. Feeling helpless in their effort to deplatform women and pull them back into the periphery of society, citizens who uphold the ‘right’ image, on behalf of the state, actively distance these women from the nation. ‘She does not represent us, because she is not really from here!’, they often proclaim. Such distancing is another expression of fashla; you embarrass us and therefore we do not claim you. When those citizens fail to mitigate the destabilising effect that visible women have on the state’s reputation, some resort to the state itself. It is a common and dangerous occurrence for citizens to tag security forces and state officials in posts shared by women who ‘cross the line’ and ask for legal action which can and sometimes does entail life-threatening consequences.

The emphasis on the responsibility of citizens in image-making demonstrates the changing relationship between individuals and the state. National image-making is no longer the exclusive prerogative of the state as the decentralised nature of social media has allowed citizens to personalise their own public image away from an imposed primary identification with the state. In response, the state has set expectations of citizens to behave in a way that reflects positively on it because it cannot ban them from partaking in personal image-making, but it can, through expanding the scope of fashla beyond the confines of the family and society, regulate citizen behaviour. Fashla is not only brought on to the family by individual acts deemed socially and culturally abhorrent; shame is now brought on to the state as well. This highlights the emerging two-way dynamic of the patriarchal system that has moved from its traditional role of protecting and providing for its citizens to expecting citizens to contribute, defend and protect the image of the state.

Eman Alhussein is a Saudi researcher based in Oslo, Norway. Her research focuses on Saudi and Gulf affairs. She tweets at @EmanMAlhussein

Dabya Al Rafaei researches contemporary public discourses and applications of critical feminist theory in the Gulf. She is a Fulbright scholar, Churchill scholar, and an Ann Grabhorn Friday fellow. She tweets at @Dabyaaa_

Mira Al Hussein is a PhD candidate at the University of Cambridge, researching sociological themes in Gulf higher education. Her research interests include decolonial trends in historical and social narratives of the Gulf. She tweets at @miraalhussein

Heritage and National Identity Construction in the Gulf: Between State-building and Grassroots Initiatives February 21st, 2020

Bad Behavior has blocked 2376 access attempts in the last 7 days.