Tuesday 29th September
Anab Jain, Superflux
Anab Jain is a designer, filmmaker, and co-founder of Superflux, a critically acclaimed research and design company. Her work has won awards from Apple Computers Inc., UNESCO, and ICSID, and has been exhibited at MoMA New York, Science Gallery Dublin, National Museum of China and V&A Museum. She is a TED Fellow, graduate of the Royal College of Art, and lives in London with her partner and three year old son. @superflux

Tuesday 6th October
Laura Bates, Everyday Sexism
Laura Bates is the founder of the award-winning Everyday Sexism Project, an ever-increasing collection of over 100,000 testimonies of gender inequality which has been described as “one of the biggest social media success stories on the internet”. The project has now expanded into 18 countries worldwide. Laura’s first book, Everyday Sexism, was published by Simon and Schuster in 2014 and will be published in the US by St Martin’s Press in 2016. @EveryDaySexism

Can PR be a force for good in the world?  Ed will lead a discussion on whether  public relations- and its interaction with the public sphere – is a moral vacuum or a potential tool for the creation of a better world.

Ed Amory is a director of freuds, the communications consultancy. His first job was working for the Conservative Party, and his first boss was David Cameron. He later worked at the Daily Mail where he was a political columnist and adviser to the editor. Tony Blair once described his journalism as ‘quite disgraceful, totally unwarranted and evidence of utter desperation’.

‘The Disintegration of Marketing’
Giles will discuss the break-down of the old network and community defining structures through which brand and consumers were brought together and how marketing will need to adapt to survive this new ‘entropic’ environment.

Giles Hedger joined Leo Burnett in September 2008 as Chief Strategy Officer. He leads one of the largest and most diverse planning departments in London and is helping the Leo Burnett Group realise its vision of being the destination agency for populist brands. @hedgehog140

Tuesday 27th October
Claire Enders, Enders Analysis
Claire Enders founded Enders Analysis in 1997. Claire is one of the most experienced analysts and forecasters in UK and European media and telecoms, with more than 30 years in strategy development and market research in these sectors. Enders Analysis supports a wide range of charities in the UK with which Claire is actively involved, including the NSPCC, and many cultural enterprises.

Cecile Emeke is a director, writer and artist from london. She is most known for the global online documentary series ‘strolling’ and the short film/web series ‘ackee & saltfish’, with her work featured everywhere from the New  York Times, the Washington Post, Ebony Magazine, Fader, Nylon, Dazed, Afropunk, Okay Africa to the Tribeca Film Festival. @cecileemeke

Dean Atta is a writer and performance poet. He has been commissioned to write poems for the Damilola Taylor Trust, Keats House Museum, National Portrait Gallery, Tate Britain and Tate Modern. Atta won the 2012 London Poetry Award and was named as one of the most influential LGBT people by the Independent on Sunday Pink List 2012. His debut poetry collection ‘I am Nobody’s Nigger’ was published in 2013 by The Westbourne Press. @DeanAtta

Tuesday 17th November
Antonella Notari Vischer, Womanity
After working for over 18 years with the International Committee of the Red Cross (ICRC) as a field-based delegate and as the main spokesperson, Antonella Notari Vischer entered the microfinance sector as director of corporate communication at BlueOrchard in Geneva from early 2008 until November 2009. From January 2010, she has headed the Womanity Foundation.  Antonella Notari Vischer holds a MSc in Media & Communication from the London School of Economics and Political Science (LSE) and a Licence ès Letters from the University of Geneva.

Tuesday 24th November
Maria Teresa Ronderos, Open Society Foundation
Maria Teresa Ronderos, as the director of the Open Society Program on Independent Journalism, oversees efforts to promote viable, high-quality media, particularly in countries transitioning to democracy. She worked previously at Semana, Colombia’s leading news magazine, where she served in a range of senior editorial roles. Together with the Ideas for Peace Foundation, she has been the creator and editor-in-chief of VerdadAbierta.com, a website that has covered armed conflict in Colombia since 2008. @mtronderos

Tuesday 1st December
Alex Perry, Journalist
Alex Perry is an author and correspondent who worked as a bureau chief for TIME for 12 years in Asia and Africa. He frequently returns to Africa, writing for a number of publications, including Newsweek, for whom he has been a contributing editor. He read PPE at Oxford University and is the winner of numerous awards for his journalism. His investigation into Boko Haram’s use of beheadings was requested as evidence by the International Criminal Court in The Hague. In 2002, the Indian government tried to deport him when he questioned the state of the Prime Minister’s health. In 2007 Perry was held in jail in Zimbabwe for five days for working without accreditation before being convicted of being a “determined and resourceful journalist.” His books include Falling Off The Edge, Lifeblood and The Rift. @PerryAlexJ

Tuesday 8th December
Mark Neville, Freelance Photographer
Mark Neville works at the intersection of art and documentary, investigating the social function of photography. Often working with closely knit communities, in a collaborative process intended to be of direct, practical benefit to the subject, his photographic projects to date have frequently made the towns he portrays the primary audience for the work. His work has been exhibited at venues including Tate Britain, London, Haus Der Kunst, Munich, and Jeu de Paume, Paris, and has been the subject of numerous reviews and articles in art journals including Frieze, Artforum, and Art Monthly. This Spring Steidl publish a major monograph on Neville’s socially engaged photographic projects from the past ten years. @MarkNeville4 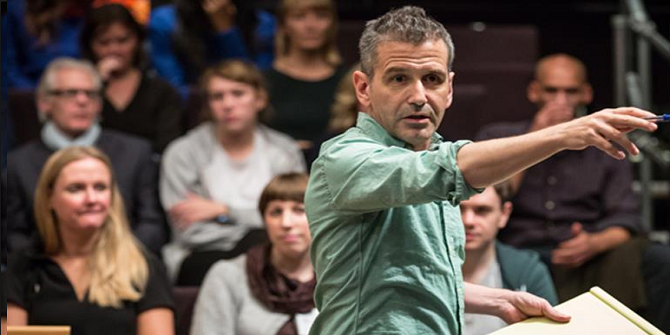