Social Class in the 21st Century: an interview with Mike Savage

Social Class in the 21st Century: an interview with Mike Savage 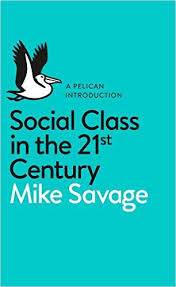 by Rebecca Mansell and Ronda Daniel

‘Social Class in the 21st Century’ is a new Penguin book written by Professor Mike Savage in collaboration with a team of sociologists, including the LSE’s Lisa Mckenzie, Sam Friedman and Daniel Laurison. We spoke to Mike Savage, who is also head of the LSE’s sociology department, about the new book, how the team collaborated and social class in London. As well as this, as a renowned social researcher, Mike gave us some pearls of wisdom to first year sociology students at the LSE.

Despite being the largest ever survey of class in the UK, the Great British Class Survey was criticised because of the significant bias towards elite and middle class respondents that took the BBC survey. The original report in 2013 was therefore forced to focus on a more nationally representative, but small, sample, overlooking the huge amount of data from the original survey. The book however focuses on the results of the BBC’s online survey and therefore has a lot of new and original findings on the elite and middle-class. The book is able to examine in detail aspects of class that have not been extensively studied before. One such issue is how attending a specific university can significantly contribute to future prospects, where we show that graduating from London universities, including LSE, King’s College and Imperial College, conveys advantages when it comes to providing their students with high incomes and economic rewards. The book discovers a ‘class ceiling’ whereby background can inhibit individuals from reaching the top of their industry, even if they make it into the industry in the first place. It also finds that the most taken-for-granted North/South divide has changed to become more of an urban/rural divide.

This was a great term effort! We involved a team of sociologists from several different universities: from the LSE, Lisa Mckenzie, who wrote about the precariat, Sam Friedman who wrote about class and culture and Daniel Laurison, who wrote about economic capital and social mobility. We also had Fiona Devine and Andrew Miles from the University of Manchester and Helene Snee from the Manchester Metropolitan University. We also had Paul Wakeling from the University of York who looked at universities and class. And we had one geographer, Niall Cunningham at Durham, who provided lots of lovely maps!

This is actually a theme in our book! My background is in history, so I’ve been interested in looking at trends and issues over time and I’m very interested in the changing role of London in the class structure. Historically, going back to the early 20th century, every town and city its local elite, for example local business and professional groups who dominated local politics and the social ‘scene’. Now, these elites are primarily based in London, or have some sort of foothold here. Also, particularly in central London, there used to be a lot of public housing and there were some socially mixed areas – this has been eroded with the growth of more elite properties, shutting out and marginalising the poorer who cannot afford these properties to the outskirts of London.

I tend to look at class in relation to other issues, and think this gives more freshness to the topic. One of the angles is around space and locality, since I have always thought that class needs to be placed in local context. I’m particularly interested in urban sociology- I think place is really important, for example, the dynamics of neighbourhoods. I’ve also looked into race and ethnicity and how this affects dynamics within neighbourhoods. I’ve studied gender; I did my PhD on the rise of the Labour Party in the first part of the 20th century, and looked at trade unions and industrialisation, and the relationship between this and women moving into labour markets, and becoming politically organised. I have also looked into banking and gender, and how banking was a largely male, pervasive, money-oriented environment, and how this traditionally male career has seen more women entering it.

Take it slowly. Use your first year to gain a good grounding of sociological method and theory before deciding what you wish to become your speciality. Build up the foundations before applying them. Sociology can be disorienting at degree level if you haven’t studied A Level sociology, because there is such a diversity of perspectives, and it’s not like being told ‘this is right, this is wrong’. You have to think critically and seek alternatives. Once you get the hang of this, you will realise how exciting sociology is and how it gives really powerful insights across lots of issues.

The details for the book launch are below:

Is There a Class Issue at LSE?: Episode 5