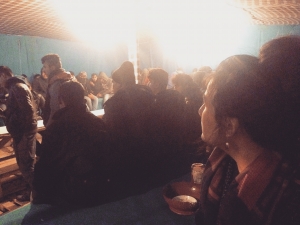 During my university break (30th December 2015), I visited the Calais Jungle and a refugee camp inGermany. I was astonished by the living conditions. This blog aims to bring to life the reality of the refugees who are, to this day, trying to make a life in two of the most renowned camps in Europe. It also aims to bring to attention the fact that the people of Afghanistan, fleeing for refuge, are not economic migrants, but fleeing for safety from war. 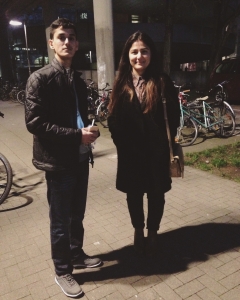 Life in the jungle, Calais (France)

The sense of optimism in the camp is fading. There is a struggle to stay warm and dry as winter sets in. I asked a group of Afghan refugees in Calais about their feelings towards their current situation: the quotes below depict their feelings and emotions and highlight the life-threatening measures they are taking to reach safety.

‘You are going back to London: can I go and hide underneath your car?’ – Boy aged 14, France.

‘We live in a jungle, in tents we have made. Winter is coming. We hope it doesn’t snow.’ – Young man aged 18, France.

‘It costs us £5000 per person to cross the border from Calais to Dover, even though that is not guaranteed. If we had that much money, do you think we would have left Afghanistan in the first place?’ – Boy aged 17, France.

‘I am 10 years old and I sleep in a shared tent with adults. They stay up late and talk loudly, so I hardly get any sleep’ – Young boy aged 10, France.

A large proportion of the refugees have not yet officially applied for asylum in France. Most of them want to settle in the United Kingdom: hence why the camp is in close proximity to the Calais Port. The refugees and migrants have said that the UK has a stronger economy, generous social welfare system and ample job opportunities.

Preferential treatment of refugees in Germany 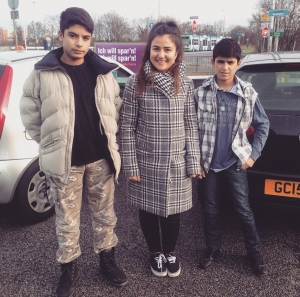 After Syrians, Afghans are the second largest group of migrants traversing the Mediterranean Sea seeking asylum during this chaotic year for migration to Europe. Despite the ongoing conflict in Afghanistan and the Taliban’s extending reach to the north of Afghanistan, Afghans have received a different welcome from the German government. They are not considered as prima facie refugees: they are labelled as economic migrants and told to stay at home amidst the conflict, executions, suicide bombings and bomb dropping.

There is a poster in our camp about language classes: at the bottom, in small print, it says refugees from Syria, Iran, and Ethiopia, etc. It doesn’t include refugees from Afghanistan. What have we done wrong? We deserve an education just as much as everyone else.’ – Boy aged 16, Germany.

Afghanistan and Germany will be working together to find legal ways for resolving migration issues. Ashraf Ghani, the President of Afghanistan, said that the first step would be for Germany to divert focus towards helping with the development of 30 million Afghans inside the country, not 30,000 migrants. This clearly indicates that Ghani is not very sympathetic to the struggles these refugees claim to have faced. As one young refugee stated:

‘Ghani doesn’t understand our position. Why would we go through all this danger if our lives were ok back home?’ – Young man aged 18, Germany.

I also managed to meet another young boy who fled Afghanistan, has claimed asylum and is now living in a refugee camp in Germany. He is an unaccompanied minor who is aged 16 and tells me about his story to date:

‘I left Afghanistan for Europe despite the dangerous journey which was ahead of me. I was scared of the police catching us and sending us back, on the one hand. On the other hand, I was scared of being left stranded with no food and water. The journey was so extremely difficult that at times I think death would have been a better option. I witnessed the death of many children and adults. It has left me traumatised and emotionally scarred. Eventually I got to Germany, and part of my worries came to an end. However, difference in culture and tradition will still take a long time to get accustomed to. I am also worried for my mum’s health in Afghanistan: she has seen frightening stories of refugees in the news and is scared for my safety. Despite me reassuring her I am ok, she still doesn’t believe me. Unfortunately, I still do not know what the future has to hold for me. Whether I will be granted asylum is still unclear, but I am grateful that the society I live in is meritocratic. I have just started Deutsch lessons, in the hope that one day I can also reach my dreams and ambitions, so that my family can be proud of me as well.  I am extremely grateful to Germany for the accommodation, food and clothing they have provided me, and hope that one day I can also do something back for this society, who have helped me through the hard times.’

It is clear that people fleeing war-torn countries such as Afghanistan, Syria and Iraq for a safer life in a developed nation, where war is not compromising their life, will continue to cross our borders so long as violence, abuse and poverty continue to exist.

The hardship for Afghan refugees is evident in the fact that they are being turned away in the countries that they hoped would provide them with refuge because they are assumed to be fleeing for economic purposes. There is not enough emphasis on why the Afghan people are seeking a safer home. We have heard stories of refugees aged 12 fleeing, because widowed parents have had to pay traffickers to get their children out before being recruited by the Taliban, which they define as a death sentence in itself.

The U.N. defines a refugee as ‘a person who is outside his or her country of nationality or habitual residence; has a well-founded fear of being persecuted because of his or her race, religion, nationality, membership of a particular social group or political opinion.’  It is unquestionably important that an entire nationality, whether Afghan, Iraqi, or Syrian, is not generalised and downgraded and assumed as migrating for economic motives alone. Afghanistan is a conflict zone and has been the largest population under a UNHCR protection mandate for three decades.

LSE Sociology at the Forefront of the Inequalities Agenda