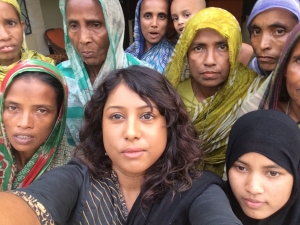 It’s my birthday today. I find I want to spend it in a way that is meaningful to me. I want to talk about the Bangladeshi people I often lie awake at night worrying over.

As a lone woman, if you inadvertently start to walk the path of empowerment and then of running a business start up, it can become a very isolating experience. Add to that the dream to find a new solution to an age old problem: poverty. You are sailing into a storm.

And I am the captain of just such a ship. Which has hit so many freakish icebergs. Today though, I want to talk about my crew, who are currently no longer with me. Whom I plan to rescue.  Whom I never stop thinking about.  Nor give up on.  These are the good souls in Bangladesh I was fortunate to meet, while developing Lovedesh – my own vision for poverty alleviation in the developing world.

The first Bangladeshi person I was majorly impressed by was Rocky.  Yes – his real name.  I checked his passport after much ribbing.  A bright, ambitious business graduate.   Clever, with fluent English but an accent he had learnt from watching too many reruns of Pirates of The Penzance.

Rocky’s story is incredible. Almost disabled as a teenager when he was playing cricket with his friends running power from an unsafe electricity cable.  Such was their desperation as young boys to have fun.   He almost died.  Yet he survived to become a brilliant student even though some of his fingers are gnarled.  He commanded my utter affection and respect after he rushed to help me with my idea to give back. I mentored him for almost 3 years. A great local scout.  His dream was to get a job with me when I got my idea funded.  He would express his delight at being taught professionals skills such as running meetings, minute taking, brain storming – all wisdom I shared from my own experience in working at some of the top global FTSE companies. Today he is back to studying and working part time. As I await funding.

Then there is Mr Boatman Bilal. Under the charity I set up called Amcariza, he was donated a wooden boat to be repaid slowly with no interest charged.  Many folks in Bangladesh have skills but lack the money to buy the tools they need.   The team and I decided Bilal was a deserved cause as an unemployed fisherman and father.   His joy was incredible.  I met him last year and when we spoke, I could see his body shaking and emotion welling up. He told me: “Miss – I have a reason to keep going. I found a way”.  Since I last left Bangladesh, my work in grassroots is temporarily halted while I raise funds. So I can help more like him.

My greatest joy was when I spent time with rural based women in my ancestral village.  As a single mother myself, I know of the hardship of wanting the best for your child.  But how exhausted you get.  While the women I met were mostly married, many were not getting food they needed.  Malnourished, illiterate and lacking skills yet tough.  And very loving and funny.   When I presented the idea that I turn my late father’s dormant paddy fields to organic vegetable plots, at first there was reluctance.  “What’s the point?” they asked.  Next. They were dismayed how they can find childcare.  I shot back with,  “bring them with you, let’s have a gossip, as well as cash for your time.”  Amazing how happy they were to give it a go. It was a sisterhood they had never experienced.

One of my most favourite moments is captured on video of us giggling.  Not many of these women had friends or ever seen an iPad – they were isolated at home and only ever shared their problems with the odd female relative.  I still speak to them and am always asked, “Miss when will we start again”. I tell them to wait. They know of the battles I am facing in my community. And know that I have never forgotten them.

Then there are my girls.  At a local religious rural school, led by inspiring teachers, where I am running an essay competition amongst its pupils under Amcariza.  The poster seen on the right was recently hung up in their school corridors.   I have met them many times.  And often address these girls telling them to they can choose to change their destiny.  Education has given them ambition but then what of after? Where do they go? That is why I worry.  So do they.

Fair trade is not fair enough in my opinion.  What all these folks told me repeatedly is they need jobs. Good, equitable income. Dignity.  And don’t want to be in awe of foreigners.  They also need savings for a rainy day or medical bills. The chance to be able to plan for the future.  It is why I promised them I choose to spend the rest of my life giving back to those who did not get born into a life of privilege like I did: free education, NHS and a healthy body.

I now spread the message that the developing world can do much to benefit from British citizens with heritage like me, who connect using the indigenous language to help create new, equitable opportunities for the disadvantaged in Bangladesh, using skills they already possess.

The system in Bangladesh can only help those who are privileged, entitled often in highest levels of Government, public sector or who are business and landowners. Who remain the minority.   People are surprised that my criticism is not with the Bangladesh Government – it rests with challenging the global development sector to ask: “Are YOU doing right by Bangladesh?’  After all who bites the hand that feeds them?  Who would ever complain?

But they should.  Because they suffer from stigma. Caused by us.

Can you imagine us in the UK running campaigns of British people who are poverty stuck; maybe with their hands in food banks constantly look needy?  What ever happened to dignifying the act of aid? It is why at the core of Lovedesh is job creation in UK and developing nations, deploying training and hiring folks with existing skills.

I am also hoping charities will work with me to fund my idea to for The Amcariza RAWO Centre (Rural, Artisan, Women & Orphans), which will sell local produce, craft items and be a safe space for women.  Who are left disconnected and in poverty. Or need mentoring or to be inspired.

I am now ready to invite the general public to help me create Lovedesh, the world’s first global philanthropic brand.

Products are unique, stylish and range from food (wood fired curry), design (indigenous fabrics) and travel (curated holidays). These will promote heritage and culture of nations in the developing world or in conflict.  Sold to the British folk.  I am starting with Bangladesh – as homage to my beloved father’s heritage.   Employing those in the UK who are disadvantaged.  And using profits to build RAWO Centre in Bangladesh via charity Amcariza , which I set up to help work with the disadvantaged at grassroots.

So rather than buying Nike or Superdry – we can start to buy from a stylish brand that tries to buy from suppliers in the developing world, knowing profits go towards raising The RAWO Centre, a new flagship building in Bangladesh.  The folks out there tell me they so need it.  How much more good can such a brand do?

Am I heading for clear waters? Or did I just add a new iceberg?   I will soon find out.  Captain Jack Sparrow is who I am now modeling myself on.  And having won Entrepreneur Of The Year Award at British Muslim Awards in January 2016, I feel much public support.  And as I do, I will be vlogging my journey all the way on YouTube of lessons learnt. Dilemmas faced. Sharing the problems.  And the challenge of launching my own Go Fund Me page.  The best birthday present I could give my lost crew and myself!

Further information about Yasmin and her projects can be found on her website: http://www.yasminchoudhury.co.uk/

Social or Material Resources: what matters most to children in Afghanistan

Removing the Monument to Overcoming Walls: reflections on contemporary border walls and the politics of de-bordering