Hartley Dean’s new edition of Understanding Human Need offers a rich analysis of different ways of framing the idea of ‘need’, which lies at the heart of social policy. The book articulates and defends a radical humanist account of human need whose distinctive features are sociality, purposeful activity, critical autonomy and development. This might seem rather abstract, but applying this way of thinking to a specific area of social policy – care for elderly people – reveals significant weaknesses in current policy approaches.

The dominant understanding of need in relation to elderly people is framed in terms of physical and mental functions and almost entirely commodified. A ‘client’ is identified as having arthritis and ‘prescribed’ an adapted tin opener. Another client is diagnosed as having a tendency to fall, so grab rails are fitted to the entry of her house. A third client can’t remember on which days to take his pills and is provided with a box with little compartments labelled with each day of the week and, if he’s lucky, a telecare reminder.

These examples convey the risk that the goal of ‘independent living’ is reduced in meaning to continuing to operate as an active consumer. As a last resort, where there is no commodity that satisfies the need thus defined, an assistant may be supplied for a specified number of minutes a day (15 minutes for a medications check, for example), but that assistant, dashing from job to job and paid at or below the minimum wage, can offer only commodified labour.

Recently there has been a growing awareness of the problem of unmet need among elderly people. For example, findings we highlighted at the launch of the Social Policies and Distributional Outcomes programme in February included the statistic that two in five people aged 65 or over living in the most deprived fifth of neighbourhoods in England had an unmet need for help with at least one ‘activity of daily living’. 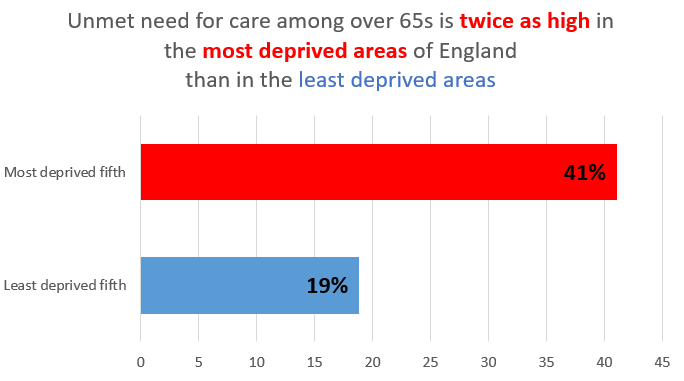 Data source: Health Survey for England 2018, social care in older adults data tables. Unmet need is defined as needing help but not receiving any help in relation to at least one Activity of Daily Living in the last month. Data have been age-standardised.

That’s shocking enough. But because the concept of need that underlies this statistic is essentially a commodified one, so too is the definition of unmet need: it refers, in effect, to a lack of commodities and services. And that is way too narrow.

Contrast the dominant understanding of human need with the one that Dean’s book articulates. There, drawing on a tradition starting with Aristotle and developing through Marx, Arendt, Freire, Doyal and Gough, and Fraser (amongst others), the characteristics that Dean describes as distinctive features of human need look rather different:

1. Sociality and interdependence. This points to the fact that a person’s need is not for independence but is inherently inter-dependent and social. As Dean says, “the realisation of a good life is fulfilled through social relations of care and caring” (chapter 3). A need for connectedness, to care and be cared for, is met neither by technology nor by an organisation of ‘care’ that militates against the formation of relationships between paid carers and the people they care for, with high turnover and insecure employment; 1 in 3 frontline care workers leave their jobs every year and a similar proportion are on zero-hours contracts. Taking Dean’s conception of need seriously implies, as a minimum, looking jointly at the needs of carers and the cared-for (whether paid or unpaid), and also at wider networks of kin and community.

2. Purposeful human activity. Caring is central to Dean’s definition of work, as one among several forms of purposeful human activity. According it that status, rather than relying on market value, or exchange value, is a crucial step in addressing the chronic undervaluing of social care. We’ve seen hints of that possibility during the pandemic, with the realisation that the set of ‘key workers’ – those who meet our needs – has little overlap with the set of ‘highly paid workers’.

But purposeful human activity is no less central to the needs of elderly people themselves. There is growing evidence of the importance of having ‘meaning in life’ for healthy ageing, and ‘having a purpose that is valued’ has been identified in participatory exercises by older people as a central capability. And we can see the consequences when this need is not met. For example, research by Ipsos-MORI on unmet needs reported one respondent putting it starkly, “You don’t [cope], you exist. You just exist. It’s an existence. I’ll tell you what I think, I consider this house a coffin with a door.” Her need for survival may be met, but not her need to be human.

Considering Dean’s third and fourth characteristics of need together,

3. Critical autonomy (or consciousness) – the ability to reflect on a situation and act to change it – and 4. involvement in historical development – including bottom-up challenges to the definition of need and how it is met.

Understanding these as dimensions of need clarifies that a focus on ‘activities of daily living’ – can openers and grab rails – is insufficient. Bottom-up challenges to the conceptualisation of need have so far come mainly from the disability movement, as a result of very active consciousness-raising – with some considerable success for younger disabled people, including people learning disabilities: de-institutionalisation, for example, and the mantra ‘nothing about us without us’. But this has so far had relatively little impact on care for and by older people – who continue to be treated in the main as passive, grateful recipients of whatever package of services the formula determines they are entitled to.

The dominant conception of need in social care corresponds to unmet need defined by a lack of goods and services, whilst Dean’s radical humanist understanding of need corresponds to unmet need defined by social structures that lead to misrecognition of elderly people, atomisation and loneliness, and the exploitation of both paid and unpaid carers.

Catch up on a panel event with Hartley Dean discussing his new book on our Youtube channel, here.

Tania Burchardt is Associate Director at the Centre for Analysis of Social Exclusion and an Associate Professor in the Department of Social Policy at LSE. She is a co-investigator in the Social Policies and Distributional Outcomes in a Changing Britain programme, funded by the Nuffield Foundation, as part of which she co-authored with Polina Obolenskaya and Jarrod Hughes a paper on adult social care in England.