Mitali Nikore maps India’s road to this summer’s Rio+20 conference and ECOSOC’s annual ministerial review and finds that the country’s call for the world to integrate the goals of environmental sustainability and poverty alleviation is being heard.

At the close in June of the United Nations Conference on Sustainable Development (UNCSD) 2012, better known as Rio+20, India’s environment and forests minister Jayanthi Natarajan was smiling. Media reports explained the smile by focusing on India’s successful attempt to restore the principle of common but differentiated responsibilities (CBDR) in global environmental discourse. But India’s satisfaction at the Rio+20 outcome is about more than just CBDR. 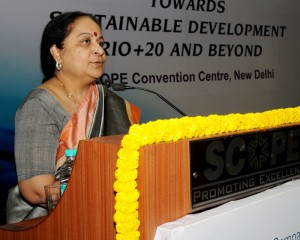 India has always wanted the international debate on environmental issues to move away from a discussion singularly focussing on emission targets and towards a more comprehensive sustainability agenda. And the Rio+20 outcome document marks the beginning of this approach.

In 2011, during the Delhi Ministerial Dialogue on Green Economy and Inclusive Growth, India had outlined the following areas of concern in advance of the Rio+20 conference:

Following that, in December 2011 and January 2012, a series of discussions were held in New York on the Zero draft version of the outcome document for Rio. Here, India emphasised access to basic services, gender mainstreaming and the unsustainable patterns of consumption in developed countries. Additionally, India cautioned that any measures towards a green economy should not impact the livelihood of people. In an intervention, India stated:

It is critical that issues of core development concern such as food security and sustainable agriculture; universal access to modern energy services; access to clean drinking water; natural resource and land degradation; challenges of urbanisation; public health; human resource development and employment generation are addressed in all their manifestations.

Many of these concerns were reflected in the final outcome document at Rio+20. Moreover, they were echoed in recent discussions at ECOSOC’s annual ministerial review. The July review’s theme was poverty eradication in the context of sustainable development and, in the words of Sha Zukang, Under-Secretary General for Economic and Social Affairs, placed job creation “front and centre”.

As India had desired, the Rio outcome document reaffirmed the role of the ECOSOC as the principle body for policy review, implementation and coordination of matters relating to sustainability. Addressing the council on July 3, Ambassador Hardeep Singh Puri, India’s Permanent Representative to the UN, highlighted national initiatives for job creation such as the Mahatma Gandhi National Rural Employment Guarantee Scheme and the National Skill Development Council. In a direct reference to Rio, Singh added: “Member-states individually and the international community  collectively will have to show determined and bold action to pursue the ambitious agenda on poverty eradication and sustainable development set by our leaders in Rio. It is abundantly clear that we cannot afford the luxury of a business as usual approach.”

In my view, this statement is a good summary of India’s current environmental stance: it identifies poverty eradication as India’s first priority and emphasises that economic growth coupled with job creation is the key to sustainability. Having identified its priorities and communicated them to the world, India should now focus on clarifying the precise nature and medium-term targets of sustainable development goals.

Mitali Nikore recently completed her masters in Economics at LSE. She previously worked as a research assistant at the LSE Asia Research Centre and is presently interning at UN Women in New York.

Strengthening relations between Europe and India: Which partnership for the 21st Century?

Closing the gap? The rural-urban divide in India

Bad Behavior has blocked 1080 access attempts in the last 7 days.