Manisha Priyam finds that state-level political strategies and the contested interaction of interest groups and institutions are important elements in determining the outcome of educational policy reforms.

The policy changes that initiated economic reforms in India in the 1990s and the politics associated with this process have been widely debated in the global arena. However, the politics of educational reforms have not received comparable attention. Writing about Latin America in “Crucial Needs, Weak Incentives”, Robert Kaufman and Joan Nelson observe that the politics of ‘first-phase’ macro-economic reforms are examined extensively while ‘second-phase’ social sector reforms receive belated and scant attention. This is true of India as well. Part of the reason for this limited attention is the difference in the nature of these two policy reforms—economic policy changes tend to have an immediate impact on daily lives whereas reforms in education and health involve slow changes to complex administrative machineries.

Besides, much of the recent research on school reforms and politics has been dominated by formal political economy approaches, drawing mainly from the discipline of economics. Analysis based on this framework has not been able to explain how reforms are successfully adopted, and primarily views the role of politics in a negative way. I focus instead on understanding political dynamics in successful cases; in particular, I ask why political leaders and public officials support educational reforms even though it may not suit their political calculations and is likely to encounter resistance from teacher unions and educational bureaucracies?

I use the framework of comparative institutionalism to understand these dynamics in the implementation of primary school reforms in India, initiated following the World Bank’s funding of the District Primary Education Programme in 1993, the country’s first-ever loan from the Bank for primary education. My goal is to examine the contested interaction of ideas, interests and institutions in the course of implementing changes in two important arenas of educational policy reform: the management of teacher interests and their unions and educational decentralisation.

My research focuses on two states, Andhra Pradesh and Bihar, and analyses the implementation of reforms from 1994 to 2011. Both states were educationally backward at the beginning of the 1990s and confronted with a common agenda for reforms established by the federal government. Political leadership at the time of reforms was also similar with power in the hands of regional parties – the Telugu Desam Party in Andhra Pradesh and the Janata Dal in Bihar – thought of as being closer to popular sentiments and elected on the basis of extensive support from disadvantaged social castes. These similarities led one to expect that Andhra Pradesh and Bihar’s political leaders would implement pro-poor policies with similar enthusiasm. However, the two pursued divergent trajectories, with Andhra Pradesh achieving higher levels and reduced disparities in primary school participation. My research finds that differences in political strategies are important in determining variations in outcome.

In Andhra Pradesh, the political leadership of Chandra Babu Naidu found an alignment between the new opportunities provided by the federal government and its own agenda for development pursued in terms of globalisation and liberalisation. While resistance from teacher unions was anticipated, the political leadership was able to deflect it by creating new allies for change among these very groups through the strategic use of the educational policy. With respect to teacher management, key measures taken included reducing discretion in policies for transfer and posting (viewed as a very important cause of ‘rent-seeking’), opening more avenues for promotion, and quicker grievance redress at the mandal (district) level. Politically, the state played on inter-union rivalries between the largest Panchyati Raj Teachers Unions (PRTU) and the Government Teachers Association—a political process that created a support base for implementing new policies among the PRTU.

In East Godavari district, I found that the government’s reform team was led by leaders and activists of the State Teacher’s Union (STU), backed by the leftist political party, the Communist Party of India-Marxist (CPI-M). Although the CPI-M was ideologically opposed to policies of liberalisation and privatisation as well as the World Bank, it faced definite constraints at the local level that led the party to support reforms. Local political challenges from Maoist groups that openly use violence (the People’s War Group) and the opportunity of gaining proximity to the district administration through school reform implementation compelled the CPI-M to eschew ideology and engage strategically. The STU used this proximity to champion teachers’ issues with the district administration, gain teacher loyalty and out-manoeuvre competing unions. Overall, the policy of school decentralisation was used by Naidu to create a local cadre of party loyalists through a process of ‘centralised’ control from above.

Bihar presented a sharp contrast to Andhra Pradesh as a wider agenda of development was missing in the state. With respect to teacher policies, the state adopted confrontational rather than collaborative strategies, creating no allies for reforms. The state also gave up on the policy of recruitment of full-time teachers and proposed filling all vacancies with part-time teachers hired on contract. This opened up another arena of institutional conflict, between the judiciary and the government, forcing sharp reversals and even abandonment of policy. In such a scenario of policy dead-locks and weak implementation, even technically well-designed school decentralisation policies could not be implemented due to weak support from political leaders and local elite capture.

In short, political skills, collaborative strategies and centralised political control over school committees were critical elements in the implementation of school reforms in Andhra Pradesh.Bihar, meanwhile, was unable to effect change owing to severe constraints posed by confrontations with interests and institutions. In both states, however, the interaction of the poor with schools and the local state was a process of struggle, indicative of the challenges that lie ahead.

Manisha Priyam teaches Political Science at Gargi College Delhi University. This post is based on her doctoral dissertation, submitted to LSE’s Department for International Development (2012). 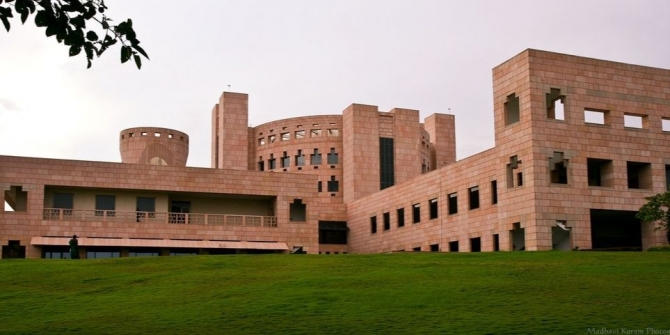